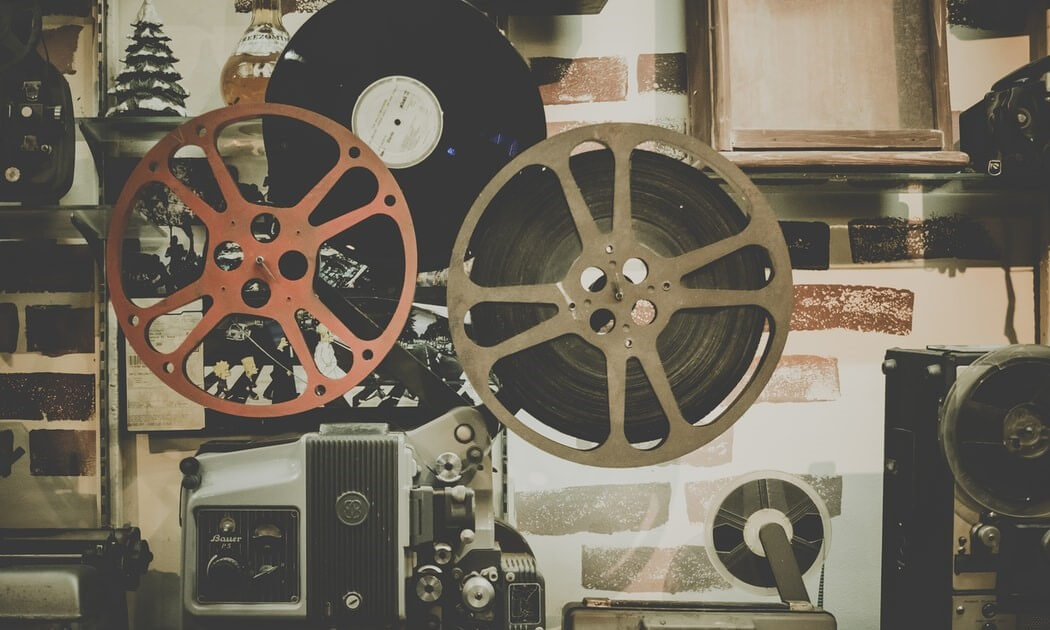 The Existential Angst of Film Music

There might be something inherently paradoxical about the presence of music in films, even as our experience as spectators seems to affirm that music quite ‘naturally’ belongs in movies. The rhetoric of cinematic discourse (representational, ‘naturalistic’, rhythmically irregular) seems incommensurate with the rhetoric of musical discourse (nonrepresentational, ‘lyrical’, rhythmically regular). As such, film music is constantly engaged in an existential and aesthetic struggle with narrative representation.

Edison conceived of the motion picture an ancillary role subordinate to his phonograph. This role was eventually reversed. We may identify several reasons for the existence of music in accompaniment to the silent film. The first is historical: music for silent films developed as an outgrowth of 19th century dramatic traditions. Further, in the silent film, music communicated narrative information that has since been restored to the province of dialogue and sound effects. It also had the decidedly practical task of drowning out the unromantic noise of the movie-house projectors. Fourth, the very liveliness of the action in the primitive silent films appeared unnatural and ghostly without some form of sound corresponding to such visual vitality: music seemed to help flesh out the shadows on the screen. Composer Hanns Eisler refines this point in citing the ‘magic function’ of film music: music was introduced as a kind of antidote against the picture. The need was felt to spare the spectator the unpleasantness involved in seeing effigies of living, acting, and even speaking persons, who were at the same time silent. The fact that they are living and nonliving at the same time is what constitutes their ghostly character, and music was introduced not to supply them with the life they lacked-but to exorcise fear or help the spectator absorb the shock.

All of these functions may be qualified as instances of music as mediation: between film and older dramatic traditions, between spectator and circumstances of projection, between spectator as living being and the cinema as ‘ghostly.’ In addition, Jean Mitry maintains that the rhythm of music mediated between real time as experienced by the audience and the diegetic or psychological time adhered to by the film: owing to its unrealistic nature, the silent film was incapable of making the spectator experience a real feeling of duration. The time lived by the characters of the drama, the temporal relations of the shots and sequences-all this was perfectly well understood-rather than felt. What was missing in the film was a sort of beat which could internally mark the psychological time of the drama in relation to the primary sensation of real time. In other words, what was missing was a beat capable of justifying cinematic rhythm and cadence. This beat, this ‘temporal content,’ was provided by music.

We should also recall the basic social functions of music – that is, to create a feeling of collectivity or communality (another form of ‘mediation’) – to elaborate upon music's social function in films, wherein it acts as a cement, which holds together elements that otherwise would oppose each other unrelated-the mechanical product and the spectators, and also the spectators themselves. The old stage theater, too, was confronted with a similar need, as soon as the curtain went down. Music between the acts met that need – it does not take critical erudition to realize that music and drama enjoy a long history of predecessors such as Greek drama or Kabuki plays. Cinema music is universalized between-the-acts music, but used also and precisely when there is something to be seen. It is the systematic fabrication of the atmosphere for the events of which it is itself part and parcel. It seeks to breathe into the pictures some of the life that photography has taken away from them.

But even as the reputation of the film art ascended through synchronous sound, color, variable screen formats, and branching utilization, the reputation of music in films descended. In retrospect it is quite easy to assume that this descent was confounded by the subordinate position of music to films, the rise of commercialism (anathema to musical arts) in the film industry, and the requisite planned obsolescence of the film product (thus, also the music) in order to sustain a market demand for continually current product.

We can also attribute this descent to music’s difference from lighting and other elements of film in several important ways. We hear it, we don't see it. Hearing is less direct than visual perception; to see something is to instantaneously identify the light rays with the object that reflects them; while in hearing we do not as automatically identify a sound with its source. Moreover, hearing requires a greater duration of the sound stimulus than vision requires of an image in order to be recognized. Thus, hearing is at once more selective and lazier than vision. In watching a conventional film whose dialogue and visuals are telling a story, we devote our concentration to its successive events and the meanings that are constantly accruing to them. Most feature films relegate music to the viewer's sensory background, that gray area of secondary perception least susceptible to rigorous judgement and most susceptible to affective manipulation.

Consider this situation. You are listening to a Bach fugue on the radio, pleased that your attentiveness enables you to pick out some of the many complexities of the fugue’s structure. You note the subject (the melodic theme) as each voice successively announces it in a different register; you can also perceive and marvel at certain permutations of the subject as, for example, it is played at different rhythms and tempi while embedded in the ongoing fugue, or is played in melodic inversion while yet other voices play the subject in its more recognizable form; with each new phrase, the movement of still more musical material constantly transforms it. At the heart of the performance, a friend walks into your living room and asks your opinion on a timely political issue. You are suddenly faced with an either/or proposition: completely lose the threads of that magnificent fugue or ignore the would-be interlocutor. In a film, where narrative is the excuse for, the cement of, and the raison d’être of the film’s existence we opt to focus attention on the narrative and visual realities on the screen before us, just as we probably will choose to concentrate on the political conversation and thereby cease following the fugue's rhetorical structures. We forsake any consideration of that abstract arrangement and rearrangement of sound which is music because it is nonrepresentational and non-narrative, and does not inhabit the perceptual foreground of the narrative film.

What happened, clearly, is that cinema developed as an art form per se in spite of the commercial stigma; and instead of obsolescence, an archive of critically acclaimed film products was established which gave validity to film as an art. Technology polished this art form to a degree of professionalism virtually unmatched by any other profession outside of the pure sciences. With this technology and professionalism came the professionals, the creative technicians and craftsmen who developed their skills to such levels as to be able to produce a film product that was frequently greater than the sum of its parts – yet without these parts, this greater result would not have been possible.

Most films, as with most books, paintings, plays, etc., endure only for a short release-life (here defined as that period of time subsequent to initial release of the product in which it is distributed to the public at large) and are quickly forgotten. But unique with films is the phenomenon that although the film itself may be for- gotten, components of the film may well stand the test of time. The British film ‘Dangerous Moonlight’ would scarcely elicit memories other than from one of the more devout cinephiles, nor would the visage of Anton Wai brook in the leading role tend to focus upon the memories of most, but the theme of the ‘Warsaw Concerto’ by Richard Addinsell, composed for the film just mentioned, would almost certainly stir memories in many, and recognition by most, current musicians  and cinephiles both.

There are two lines for defending the value of film music. There is this first argument that the moment we recognize to what degree film music shapes our perception of a narrative, we can no longer consider it incidental or indifferent. Like lighting, free of verbal explicitness, music sets moods and tonalities in a film narrative. Having come to experience a story, the spectator receives much more than that, situated by the connotative systems of camera placement, editing, lighting, and of course, music. In this spirit, to judge film music as we judge any other music is to ignore its status as a part of the collaboration that is the film. Ultimately it is the narrative context, the interrelations between music and the rest of the film's system, that determine the effectiveness of film music.

The second argument, which seems most convincing, though, is that the music of films must be considered for what it is, not what it does. To the argument that one of the main criteria for judging the worth of film music is the emotional response elicited, I would like to counter with a plea to examine the validity of the judgmental criterion. Does indeed the emotional response elicited, which in fact may or may not be the same from every viewer in the audience, serve to reliably measure the esthetic value of the music which elicits any given response or sets of responses? Does not, in fact, the range of heterogeneity of responses decrease the validity of emotional response as a psychodynamic criterion for the evaluation of esthetics? The larger the range and heterogeneity, the less valid the measurement criterion, and the less valid the criterion, the greater the error in employing emotional response as a measurement instrument.

The elements are there in the music. They interact contingent upon environmental restraints. They are often forced to assume postures dictated by dialogue, sound effects, and scene length. They struggle in the company of poor scripts and inadequate acting. They often prostitute themselves to the whims of producers and directors and sound recordists. They frequently wear the shabby clothes of hurried commercialism or the cast-offs of tasteless imitators. Yet, through all of this, in the hands of gifted composers, arrangers, orchestra tors, performers, editors, and conductors, they often blend themselves into a synthesis of musical beauty the equal of anything in the musical literature. It is this beauty which we should judge, and in so doing we can only hope that the film of which the music is a part will correspond in value.