The Puppy in the Basket in the Picture
|
Paul Ruta 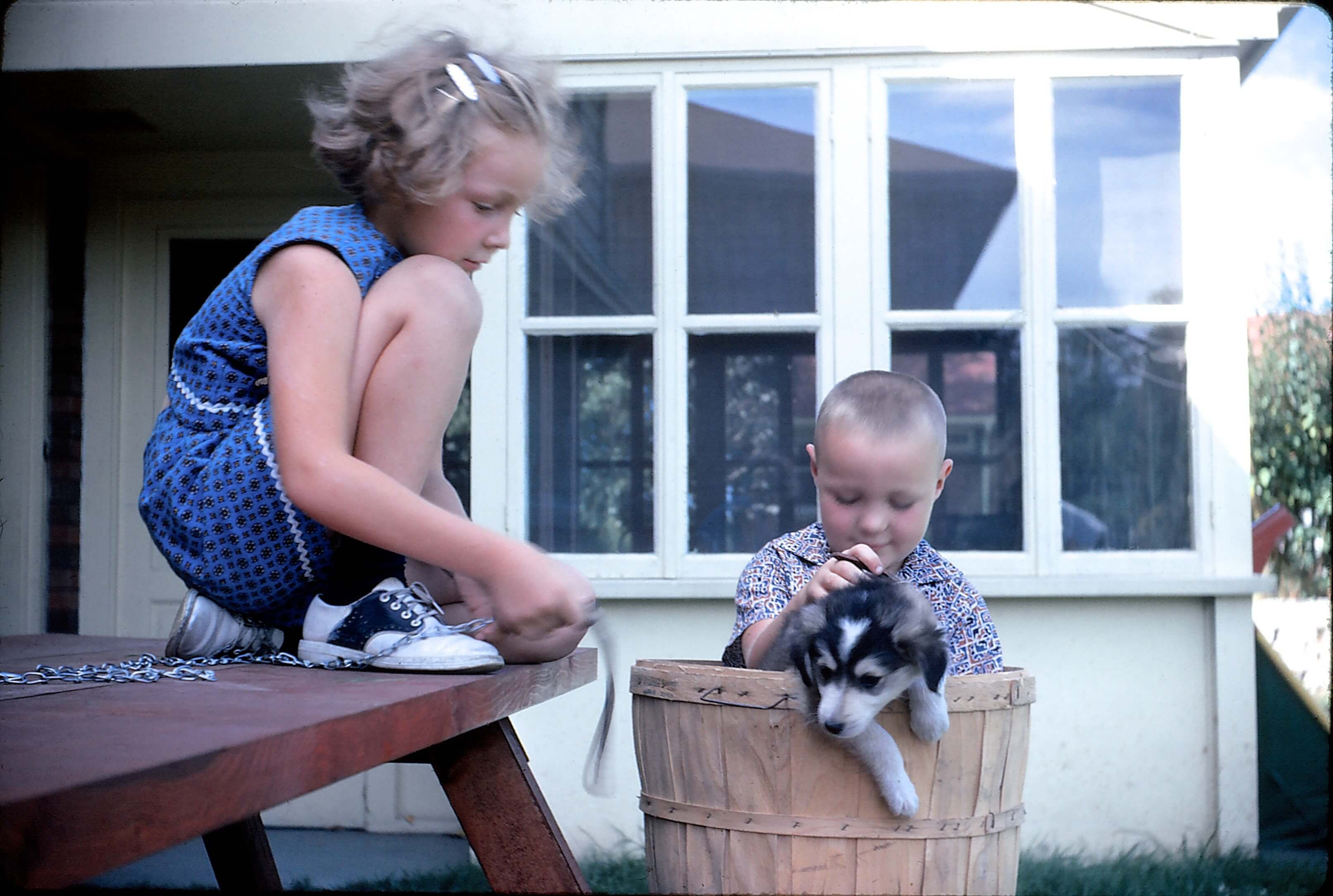 The Puppy in the Basket in the Picture

It’s probably August, given my short-sleeve shirt and buzz cut, and my big sister’s breezy blue outfit. I still remember those shoes. Our mom dressed us in unnecessarily nice clothes for kids of our age and rambunctious inclination, who would only go outside and get them grass-stained and torn without delay.

It’s 1962. Nobody had heard of the Beatles yet and John F. Kennedy was still alive. Our little sister was not yet born. It was a time of peace and prosperity for many people, at least in our quiet corner of North America, if there ever was such a time. It was especially hopeful for us, a pair of blithe and oblivious kids drifting through childhood in a haze of sunshine, believing that nothing is more filled with hope and wonder than the future. Every person we knew, every cartoon we watched, every Dick and Jane book we read, and every Easter egg we found gave us no reason to suppose everyone’s dreams weren’t exactly like ours.

From time to time—or whenever our mom needed us out of the house for a while—we’d pile into the Buick and our dad would drive my sister and me to Niagara Falls. The falls themselves were a mile or so from our house—so close that if you went outside early enough in the morning you could hear them. We’d park, usually quite close to the Horseshoe Falls, on the Canadian side, then we’d stroll through the mist and see who was first to spot rainbows. At the brink of the falls we’d clutch a railing and watch endless green water slide over a cliff and plunge into oblivion. We were spellbound, standing within a few feet of so much power rushing past in constant, unstoppable motion. If our sense of wonder ever needed refreshing, this certainly did the trick. We’d stay for half an hour, sometimes longer, then stop to buy bread at an Italian bakery on the way home.

I’m sitting in a bushel basket. There were plenty more just like it stacked in the porch behind me. We’d take them to farms around the nearby town of Niagara-on-the-Lake and return with a trunk filled with cucumbers and tomatoes, peaches, pears and strawberries. My parents would spend weeks canning fruit and making jams, pickles, relishes, and barbecued tongues of red pepper bathed in olive oil. By the end of the harvest season our chest freezer was packed and our cold room was a museum of Mason jars.

There’s a puppy in the basket, too, though in the picture it looks like he wants out, like he’s eager to go for a walk on the leash in my sister’s hand. We had only recently got the puppy but we loved him instantly as any child would. A dog was an obligatory pet in our neighborhood, a sturdy addition to every proper household. A preference for cats was greeted with scorn. Everyone knew cat people were inscrutable foreigners and elderly spinsters and their homes smelled of strange cooking.

We had dinner as a family every night, my father arriving home shortly after five with a loosened tie and an appetite. The four of us sat around the kitchen table and the puppy’s dish was underneath. I must have felt sorry for him having to eat by himself down there because one day I slid from my chair to join him, nudging my face into the bowl next to his before anyone could stop me. The puppy didn’t see it as a gesture of good fellowship and he snapped and bit me just above the eye.

The next day the puppy disappeared. My parents had taken him back to wherever they got him—at least that’s the story they told my sister and me—and that was the end of that.

It felt so unfair. Not that they took our puppy away, depriving my sister and me of our new companion. It felt unfair, even at the time, because the whole thing was clearly my fault, not his, but he was being punished for it—as was my sister, come to think of it. Of course I was too young to have known not to mess with an animal while it’s eating but I sure as shit got the message the second he bit me. When basic instincts are triggered, sometimes it takes a little bloodshed to make a point.

I’ve since wondered if it might have been wiser for us to keep the puppy and give him a chance to grow into a dog as my sister and I grew into young people capable of looking after him. But second-guessing parents is a bad practice. Whatever their faults, my parents always did what they believed was right in the moment.

Today the scar is lost among the wrinkles, a faded memento of a lesson taught to me by a puppy whose name I don’t remember. My sister says she doesn’t remember his name, either, making me think we didn’t have him long enough to decide on one.

I moved away at age seventeen for school, then lived abroad for years. London. Singapore. Wherever I went a certain dream came with me, a recurring dream of going over the falls. I still have variations of this dream, sometimes plunging into the abyss like an old-time daredevil and sometimes, just as I reach the brink, arcing away like a bird. It’s exhilarating and liberating, my spin on the way other people might dream of flying.

When raising my own kids in Toronto, we’d make regular trips to Niagara Falls, the city, to see family. I’d often squeeze in a quick, solitary visit to the water’s edge and lean over that same railing to feel that surging power, to recharge the stuff of my dreams, and to make sure my capacity for wonder was still intact.

Now I live on the opposite side of the world again, with the South China Sea out my window in a Hong Kong high rise. It’s a calming view of tropical blue waters with massive container ships gliding back and forth all day in silent slo-mo. Once in a while I’ll catch a glimpse of the scar in the mirror and wonder if that cold green river is still thundering over the cliff without me.

Paul Ruta is an old ad guy living in Hong Kong. He wrote a children's book under the pen name Andy Spearman which was published by Penguin Random House. He has talked baseball with Vidal Sassoon and has won a trophy for throwing a Frisbee really far.

Dancing with the Shadows

Patterns of a Postal Address