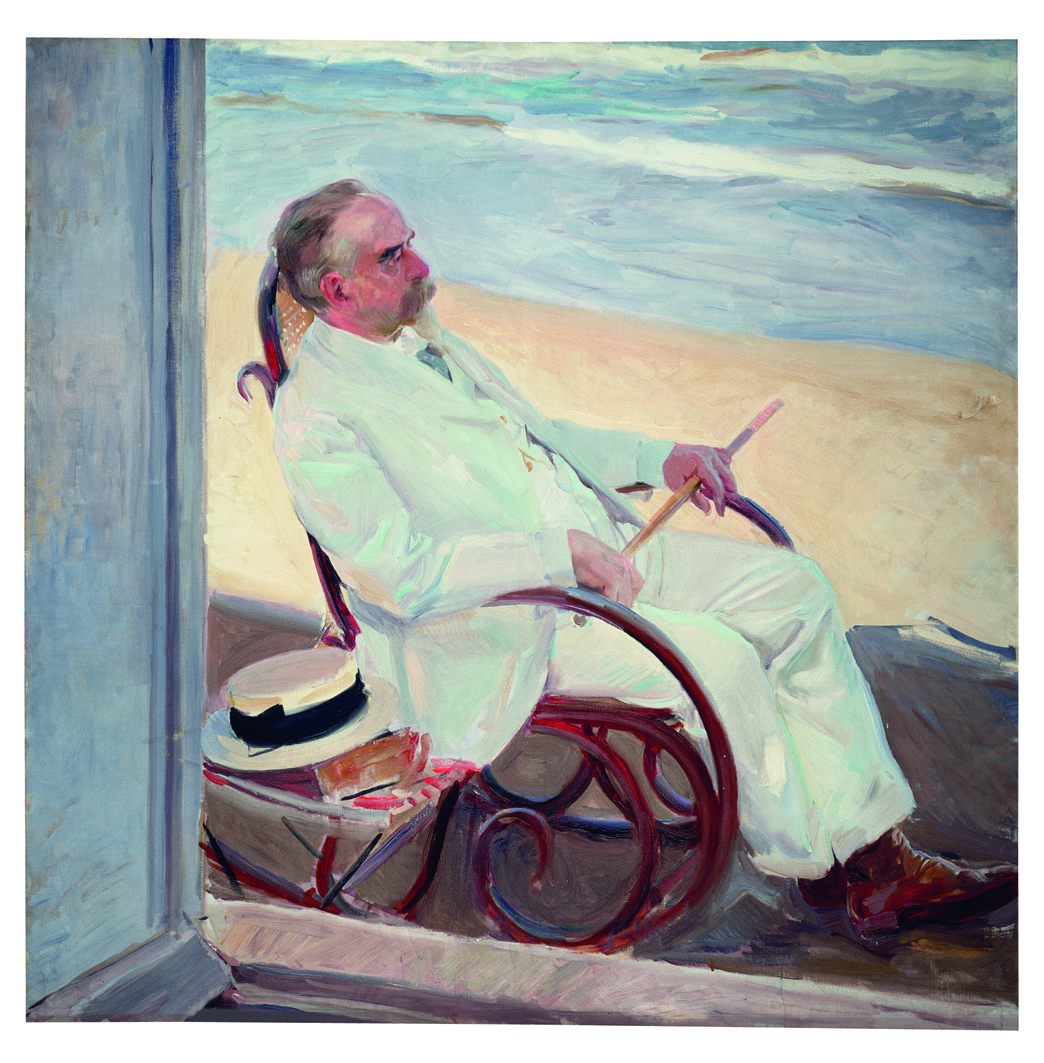 Last month, I received a gift from my friend Simón, who, knowing my predilection for Joaquín Sorolla, sent a postcard from the Thyssen Museum in Madrid, with the painting ‘Antonio García en la playa’ (1909). The postcard, as its name suggests, shows Antonio Garcia, Sorolla’s father in law, sitting at the beach—the scene viewed through a window.

Later, I discovered a photograph (I do not know the photographer’s name) showing Sorolla painting the piece, and Antonio García sitting in front of him. But, to my surprise, there is no window or building through which he observes the model. Both are on the sand, in the middle of the beach. A more critical observation of the postcard reveals that Antonio Garcia’s foot is also incomplete, its tip being cut by the frame of the painting.

Anyone who has seen paintings by Sorolla, or who is acquainted with his biography, knows that photography played an important role in his education and vision. Yet, it was by looking at his character’s foot in the painting that I discovered this photographic essence. Cartier Bresson’s famous photograph, ‘Rue Mouffetard, Paris’ (1954) also shows the ‘incomplete’ foot of the model or character, and it finds its strength in that fundamentally photographic disposition: time cannot be stopped by the photographer before taking the picture, and it cannot be stretched in the way that film can. Hence, the photographer is always either too late, or too early, and the image is composed within spatial and temporal possibilities.

One usually thinks of photographic language as a translation of the principles of painting, with careful balances between form and colour, the thirds and types of lines for composition. I believe that, to some extent, it is true. However, one must also consider that some exchange between the two disciplines take place the other way around; painters also borrow elements from photography (I will limit my enumeration to those that apply to this painting): the use of the out of frame, the apparent spontaneity of composition, and the suggestion of a point of view. There are also two more that I’d add, that are present more specifically in Sorolla: the idea of a conflictive relationship between the viewer and reality, and, from a technical point of view, a particular use of the light, which consists of overexposing certain parts of the image, in the same way that a camera permits.

The theme of the impossibility of grasping the present as it is, when driven by a moral necessity of striving to doing so, is what I find the most interesting in photography’s contribution. Sorolla takes this representation of a subjectified objectivity, and subscribes it to an idea which had already been operating in Spanish art.

By the mid-19th century, when Larra and Mesonero Romanos started writing their cuadros de costumbres (sketches of manners) in Madrid, they did it, in part, to record the physiognomy of a country that was being lost in modernization. As Larra put it, ‘the costumbrista is like a painter that tries to portray a child, whose features change every day, and has to capture what the historian cannot write’. Therefore, the costumbrismo (I do not know the English equivalent) is the ideological projection of reality, which implies its mimetic conception, conceived in a circumstantial way.

Thus, the scenes by Larra and Mesonero Romanos were focused in spaces that represented certain psychological attitudes or collective personalities, like the café, a key place, the meeting point for debate where representatives of every social class could go and express their feelings and opinions. This is where articles were written: the rasguños (scratches), through which Mesonero Romanos intended to ‘sketch lightly, or watered down, the customs and current uses of our capital city’.

The parties, the streets, and the public gardens where typical stages for these scenes to take place, and this is something Sorolla understood well. In 1911, he began what would be the sum of all his work and views, his monumental Vision de España, in which he would present in fourteen enormous paintings the scenes he thought were the most representative of Spain. This provided a complete picture, both national and social: the final objective would be to preserve this full image for posterity. I find it funny that Sorolla was able to carry out his mission with the help of photography, a modern tool much criticized by ‘traditionalists’ and ‘fundamentalists’ of the arts. At that moment in Sorolla’s work, the two tendencies (the difficulty of grasping reality and the moral necessity of saving the live image of a culture and society) unite, and that is exactly what allows him to accomplish his visiones until the end of his life.

PS: if what has already been said is not enough regarding the relationship between Sorolla and photography, there are about 2,000 of what the painter called his ‘colour notes’ (manchas, notas de color or apuntes, much alike Mesonero Romano’s rasguños), which consisted of oil paintings in small cardboards. These cardboards where carried around in a small box, together with his brushes and colours, which made it possible for the painter to stop wherever he felt there was an impression to be saved during his travels through Europe. Some of these paintings were used as preliminary studies for further paintings, and the rest were left as they were, as small colour sketches.

On top of this, Antonio García Peris, the character of the painting we discussed, was one of the most important photographers in Spain by the end of the 19th century. Sorolla was his disciple, having passed long hours in Garcia’s studio, watching and learning.

Long-braided maidens gazing from the Acropolis to Russell Square