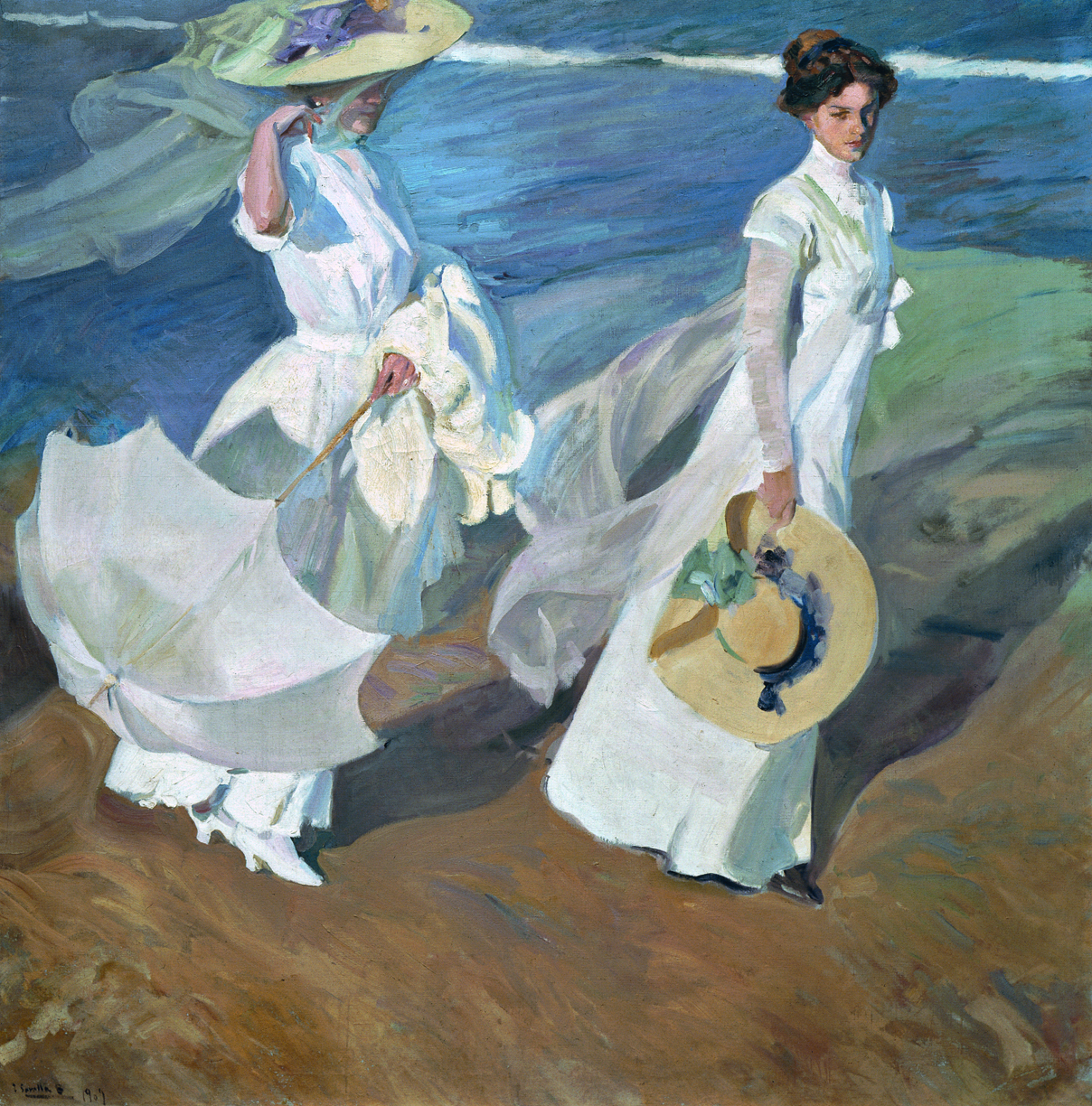 Let’s be sacrificers, but not butchers, Caius.

We all stand up against the spirit of Caesar,

And in the spirit of men there is no blood.

O, that we then could come by Caesar’s spirit

And not dismember Caesar! But, alas,

Caesar must bleed for it.

There are two works that I particularly enjoy (one by a writer and the other by a filmmaker) that reflect on the nature of reality as it appears before us, and its relationship with identity: La Invención de Morel, the novel by Bioy Casares, and The Strange Case of Angélica, the film by Manoel de Oliveira. In both stories, the character falls in love with someone they’ve only ever seen on a picture. They then go through terrible suffering as a result of the impossibility of communication. Ibn Hazn explains this problem more clearly in a passage from The Ring of the Dove. He anticipates these plots by nine centuries:

Another of the most pilgrim origins of passion is that the love is born from the simple painting of the beloved, without ever having seen him. Through this way one can even reach the highest degrees of love; to messages and letters being exchanged; to suffer sorrows, disappointments and insomnia, and all without ever having contemplated whom is loved.

In Bioy’s novel, a fugitive on an island discovers a machine that can capture the human body as completely as possible: it accomplishes this from every angle, every gesture, every action, and each reproduction lasts an entire week before reinitialising. The apparatus then adds the replication of sound (voice, tone, chant), touch (resistance, temperature), taste, smells…

Eventually, what happens is that the fugitive falls in love with a certain Faustine, but is incapable of interacting with the living photograph. He ends up feeling like a ghost, an outsider (and in his diary writes two wonderful lines about Faustine: ‘sublime, not far and mysterious / with the living silence of the rose’ sublime, no lejana y misteriosa, / con el silencio vivo de la rosa]). In the end, he decides to submit himself to the luck of the machine, to be captured and reproduced eternally, hoping to find Faustine in that other reality.

Again, Morel’s machine ‘captures’ perfectly, from all angles, and reproduces without flaw. A regular camera, if it tries to capture identity, lacks several things since the human being is not only the apparent, or obvious, part: one thinks and feels and laughs when something is funny, or cries, and our voices are affected when we are nervous, and so on, with all things…: everything is a translation of the internal movements of the soul. In art, one can account for this by amplifying, modifying, or eliminating certain features, while in a photograph that is, to say the least, impractical (1).

Morel’s eternalreturnograph reproduces exactly what it had previously captured, and then eliminates the first version. Only ‘the simulacrum’ survives. The fugitive’s sacrifice, at the end of the novel, is to record himself, which he knows will kill him (‘My soul has not passed, still, to the image; if not, I would have died, I would have stopped seeing –perhaps- Faustine, to be with her in a vision that none will collect’).

But why, then, does the fugitive fall in love, if Faustine is no more than the replication of a surface, lights and shadows?

It is a matter of relentlessly adding each attribute until the total product is obtained. It is made clear that what is being reproduced is a flawless version, as complete as the original, as it supersedes the world. Bioy knows the limits of photography, and that is why he takes its imitative faculty to its fullest capacity (which is yet to exist): this way, only the machine could achieve the portrait of souls. Photography, not as an artistic medium, but as implacable record and mirror. (There is a text in which Borges shows this more entertainingly than me: a palace disappears abolished and struck down by the last syllable of a recited poem:

in the poem there was the enormous palace whole and meticulous, with each illustrious porcelain and the glooms and the twilight lights and each unfortunate or happy instant of the glorious dynasties of mortals, of gods and mortals that dwelt in it since the endless past. Everyone was silent, but the Emperor exclaimed: You have taken the palace from me!)

In Oliveira’s film, something different happens; the image is a common printed and one-dimensional post-mortem photograph. Isaac falls in love nonetheless, and becomes obsessed with the image of the dead girl named Angélica. It all starts when, while looking through the lens in order to photograph the body, he “sees” her smiling.

From this awakening until Isaac’s last moments, every time he looks at Angélica in his little printed square (and in dreams too) Isaac’s dementia is hinted at. Yet, I think the symptoms of the lover (head down, the sighs, the insomnia, the frequent Angélica!!!s, the avoidance of dialogue, and more importantly, the pain that kills him) are apparent in his behaviour (2). Keeping in mind that one cannot fall in love with an image, but with what that image represents, we must assume that the photo frankly reveals something deeper: her soul.

However, to understand Isaac’s infatuation in The Strange Case of Angélica, one must bear in mind that, contrarily to Morel’s invention, here the spell predates the photograph: Angélica comes to life in the camera lens before the photo is printed. It is something distinct to the portrayal of the object, and other than the photograph, that causes the photographer to fall in love.

What distinguishes Angélica from all other subjects that Isaac has photographed in the past is that she is dead (it is expressed in the film that he was absolutely not used to that type of work), and what makes her a particular case among the dead is that she seems asleep. This is what renders the subject complete, and fully reflected. Before the photographic process, the only one who stands in front of her, and observes carefully, is the photographer. He captures a transparent and genuine portraiture, free of any artifice (voluntary or not) from the portrayed. The ‘model’ lies in their state of maximum truth, without any affectation of the world.

So, the process of clearing Angélica’s soul was in fact already complete, and only afterwards does Isaac’s camera capture it. It is likely that, let’s imagine, if Angélica had not been like that, as if smiling, or if instead of being in an armchair she had been prostrate on her deathbed, she would not have come to life in Isaac’s eyes. That is, if the dead had seemed dead, it could have generated the same effect as when the living one seems dead, as we witness in The Captive by Proust:

And indeed, what I saw was a dead woman when I entered her room. She had fallen asleep as soon as she lay down; the sheets, wrapped around her body like a shroud, had assumed, with their beautiful folds, a stony stiffness. It is said that, as in certain final judgements of the Middle Ages, only the head emerged from the tomb, waiting in its sleep for the archangel’s trumpet. A head, hers, surprised by sleep, almost bent, hair bristly. And seeing that insignificant body lying there…

But somewhere else, when she lies down differently:

Stretched out as long as it was, in an attitude of naturalness that could not be invented, it seemed to me like a flowery stem that someone left there (…) Her I no longer escaped every moment, as when we spoke, through the doors of unconfessed thought and the look. She had collected within herself all that was externally; she had taken refuge, locked herself, summed up in her body. Holding her under my eyes, in my hands, it gave me the impression of possessing her entirely, an impression that I did not feel when she was awake. Her life was submissive to me, it exhaled its thin breath towards me.

When sleeping, the soul rests and does not strain, just as the face or hands relax, and the change in appearance, in this case, is the consequence of a state of the soul.

Therefore, the sleeper is not absent, but more present than ever, in the purest possible state; no part of him, or her, is being pulled by the emotion, or attention, of the specific circumstances in which the person is demands. It is the fugitive’s distant rose, which is untouchable, and therefore cannot close. If it were touchable, it would fold back, it would be a scary rose, like Alfonso Reyes’:

if the living hand gets to touch it.

—Better hand than the hand of Orpheus,

hand that I presume and do not trust,

to bring the sleeping Eurydice

to the surface of life.

Faustine is present in the exact representation. It is not art, but an exhaustive and infallible scientistic record. Angelica and her soul are both present before the taking of the photograph itself: you just had to look at her closely, and, perhaps, from the correct angle.

And as the fugitive gives himself to the machine so as to meet Faustine, and Isaac meets Angélica in the afterlife, we recognise that for there to be a contact of souls, they must overcome ‘apparent reality’. One moves to the world of images, the other to the invisible: both seas to which the rivers of souls flow. We know, we witness, Isaac effectively meeting Angelica, but we are uncertain if the fugitive will find Faustine, or whether she will find him, in the “sky of her consciousness”…

Recently (2016), a Wayne Wang film tackled the same topic in While the Women are Sleeping: a character films his girlfriend sleeping every night, and each night deletes the footage from the previous one. He thinks that at some point he won’t be able to postpone his ‘need’ to kill her, and the recorded image of the night before her death is going to replace her in the future absence… Perhaps a similar study could be done here.

(1) “Oh! The portrait; the portrait with the model’s thoughts, with the soul; that is what I think should come” (Vincent van Gogh in a letter to his brother Theo. Arles, September 3rd, 1888).

(2) All this, Ibn Hazn also comments. (Exposed by me in a scrambled manner) he says that the lover: refrains more in depressions, moans and deep sighs… surprise and anxiety are painted on the face of the one who loves when she unexpectedly sees who she loves or he appears suddenly… when she hears someone name him suddenly… the dishevelled get dapper, the dirty clean themselves… she values more the solitude than the company and retires to a place far from everyone… it is of necessity that she tells her troubles to the air and talks to the ground, and in this she finds solace, like the sick with their woes and the sad with their sighs, because, when the troubles come one after the other, the heart becomes narrow to encompass them, and, if she does not vent by speaking, or does not seek relief by complaining, she would soon perish in grief and anguish would end her.