Imagination as Metaphysics: Description in the World of Wallace Stevens
|
Isabel Hernandez-Gil Crespo 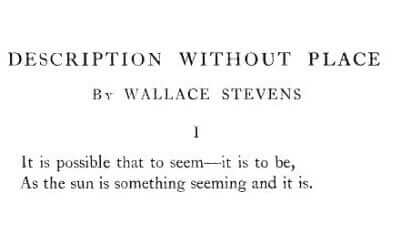 Wallace Stevens played his most dramatic themes upon the strings between philosophy and poetry. Neither a pure aesthete nor an aesthetician, Stevens’ knowledge of the two seeps through in the form of an irreconcilable tension, as I have found most recently in his allusions to philosophy in Description without Place. Coupled with Dante’s address to the reader in Paradiso, they can provide a sense of direction between this 1955 poem and his collection of essays in The Necessary Angel, published in 1942. When Dante tells us to “go back now while you can see your shores” – where are we supposed to be headed? What is the irreversible path that he is willing to lead us through, but warning us against? To this question, Stevens has a swift and ready answer: it is up the ladder of the imagination, that old trope of romanticism and not so much that of philosophical discourse.

In one passage from The Necessary Angel, Stevens toys with the notions of imagination and reality as two values interchangeable at will. As his examples, he forwards the spirits of Spain and Italy, represented in the figures of Cervantes’ Don Quixote and Verrocchio’s Colleoni. He writes: “the tradition of Italy is the tradition of the imagination. The tradition of Spain is the tradition of reality. There is no apparent reason why the reverse should not be true.” For Stevens, the precise balance between them is not to be stressed as a mean between “two grotesque extremes”, but rather as a state of radical interchangeability.

Going back to the philosophical theory of descriptions, which Stevens introduces through the line ‘“old stars are planets of the morning, fresh in brilliantest descriptions of new day”: are we to interpret Stevens literally? How are we to take the claim that “the theory of description matters most/ It is the theory of the word for those/ For whom the word is the making of the world”? I think the absence of place, which inspires the title of the poem, is the key element in his harmonisation. On the theory proposed by Bertrand Russell, of which Stevens was most probably aware, descriptions function as part of what philosophers like to call an ‘existential proposition.’ In English, this amounts to a statement of the sort ‘there is exactly one so-and-so.’ For Russell, the statement ‘the eye of Lenin kept the far-off shapes’ translates into ‘there is exactly one thing such that it is Lenin’s eye and it kept the far-off shapes’, and Lenin’s single eye is actually part of the proposition. With this thesis, Russell was trying to counter a view that placed language and experience on one side of an opaque divide between appearance and reality. With this in mind, one way of articulating Stevens’ point is that he is not willing to pick between either of the sides. For him, ”Description is revelation. It is not the thing described, nor false facsimile.” Keeping our distances – since I’m not suggesting that this was precisely what Stevens had in mind, but rather providing a framework in which he can be interpreted – I think that we could loosely allow each of the views I mentioned to fall under these two categories. This leaves us with the picture that we wanted – that balanced spectrum in which Don Quixote and Colleoni comfortably switch personalities; a graceful glissando on contrary modes.

With a bit of effort, and more than a bit of irony, we may even incorporate an anti-Kripkean synthesis into the picture. By this I mean that we could draw a parallel – though of course not an identification – between the stipulation of possible worlds in philosophy, and the creative role of the imagination. Without plunging too deep into metaphysics of modality: a possible world is stipulated through description – we tamper with its characteristics to unveil what is allowed by logic and our linguistic intuitions. This rough sketch should yield enough material to compare this notion with Stevens’ literary claim: that the poet can stipulate at least as many possible worlds as the logician, but that in his worlds, description can trespass the dividing glass between the seeming and the true. Stevens describes the act of creation as “our affair of the possible” and intertwines these metaphysics with those of Nietzsche, whose sun is “gildering the pool” in Stevens’ poem. In Zarathustra, multiple suns appear in contrast to the Platonic One, and hence to the conception of unitary, unreachable reality. From Nietzschean philosophy, Description Without Place also borrows the identification of ‘seeming’ with ‘being’. Now, the point is not that the language of the imagination is as good as that of logic for world-stipulation: in our poem, Stevens develops his metaphor to hold that “men makes themselves their speech: the hard hidalgo lives in the mountainous character of his speech.” In combination with the general message of the poem, this yields the far more radical conclusion that “poetry is only reality, after all, and that poetic truth is a factual truth.”

It is in this framework that the shared tonalities between the songs of Dante and Stevens should begin to resonate. The reader’s departure from the real leads her along the scales of the connotative, which for Dante, unlike for Stevens, are unidirectional. In this sense, Dante keeps in line with the Italian tradition: he favours the imagination over the real; the depths of the sea over the shoreline. In Dante’s paradise, there are no poets – the mind of God yields enough creative power to exclude the need for any art form. But Stevens thinks we can abandon our deference to the divine. No doubt he was at least in part referring to Dante when he wrote that “the great poems of heaven and earth have been written and the great poem of earth remains to be written.” Guided by the Muses, and piloted by Apollo, this time the poet is neither William James’ ‘invalid metaphysician,’ nor Rodin’s Dante at the gates of hell, nor the speaker of Paradiso, but “the necessary angel of earth/ Since, in my sight, you see the earth again.”

A night in Cambridge