Dancing in the Streets: Part I
|
Joe Wagner 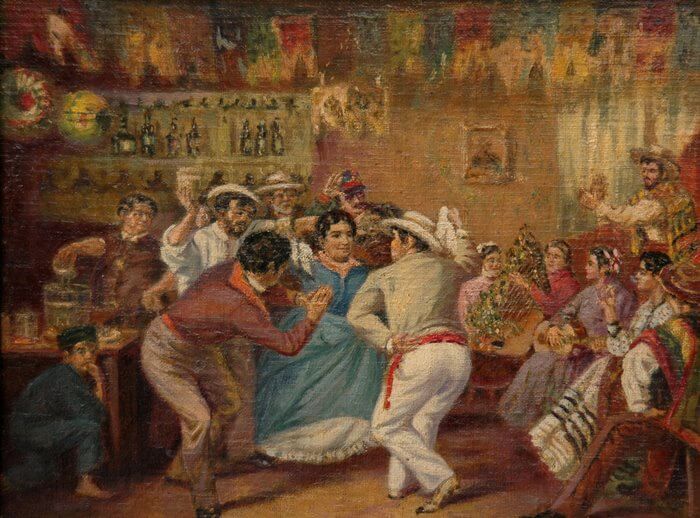 And little by little the truth begins to rise
like a dead body. A dead body rising from
the bottom of the sea or from the bottom of
a gully. I can see its shadow rising. Its flickering
shadow… rising as if it were climbing a hill
on a fossil planet.
Roberto Bolaño

My wife, Sonia, could never get used to living in Ohio. She said it was the weather, but it was more than that. She’s Chilean, and she needs Santiago: the inclination of the Andes, an easy drive to the sea, the world’s driest desert up north, the fiords and glaciers (or what’s left of them) down south. Her family, her friends, the language (Chileans speak their own sort of Spanish), the 9:00 news every evening. In addition, for me, there’s the wine. So we’ve managed a way to live between my work by Lake Erie and the capital of Chile.

I’ve come to realize that I have been there for a few noteworthy events—I was there in 2006 when General Pinochet died and the country elected its first female president, Michelle Bachelet; there in 2010 trembling through an ugly earthquake; there for our daughter Isabel’s birth in 2011 (for me a bit more than noteworthy); and here now in 2020 for the protests, an ominous drought thanks to climate change, and everybody’s coronavirus. I was also in Santiago in July of 2019, when workers at the Líder supermarket—now owned by Wal-Mart—went on strike and walked out. That didn’t make as much news, but it’s something that has stuck with me ever since.

On July 10th, a deal between the workers’ union and the owners had still not been reached, so over 17,000 workers walked out. They wanted better wages, better working conditions, and some retention measures as the supermarket chain enhanced automation. The store I happened to walk by off the Los Leones metro station had maybe a dozen people milling around out front, a few of them holding signs: “They Make Millions, We Get Crumbs,” “Fight for Dignified Salaries,” “No More Abuse,” and “The Union is in the Street Demanding Dignity.” As I learned later, it was the biggest private sector strike in the country’s history. It lasted 6 days. A sticking point was that the union wanted a four per-cent raise in salary, but Wal-Mart Chile stood at three. That extra one percent was at first, apparently, untenable. But the union and the workers persisted; they won a five-point-one percent raise as well as a few other concessions. Five percent of next to nothing is hard to jump up and down about, but every little bit helps. The stores reopened, and we shopped again at the one closest to my in-laws’ house. Everything back to normal. Except that three months later, just after The Joker with Joaquin Phoenix hit the cinemas, streets all over Chile blew up a lot like they did at the end of that movie, with some of the same masks, signs, fires, and awful violence. As I write this near the end of March, 2020, the only thing that’s brought peace and quiet is Covid-19, though even that couldn’t hold for long (on March 29th, Young Combatant’s Day, fires and violence took over some of the streets again). President Piñera has said the country is at war, but one could reasonably ask: who are the good guys exactly, what’s their objective, and how will we know when they’ve won?

A month or so after the protests began—they’re often called 18-O for the initial explosion on October 18th—a team from la Universidad de Desarrollo examined 1000 phrases and signs that were scribbled all over downtown Santiago. They wanted to see what the street was trying to say. In looking at the intent behind these messages, the team grouped them into seven categories, such as “denouncement” and “victimization.” Forty-four percent of all the messages involved “resentment” and “threats” (23.7% and 20.3%, respectively). The lowest percentage, at four-point-five, was “hope.” That’s not a healthy balance, and probably not unique to Chile. But from another perspective, the team found that forty percent of the messages were self-referential, that is, the street was talking to itself, telling itself to mobilize and be strong. In other words, as I see it, to not give up hope—to keep putting brand new sneakers on the feet of dying people in wheelchairs, for instance, because it does make a difference. There were, in addition, hardly any religious references, and no xenophobic or anti-immigrant discourse, though in just the last year this still-very-Catholic country has taken in over a million people from countries like Venezuela, Peru, and Haiti.

The study found that after President Piñera, most of the hatred and resentment behind the graffiti was directed at the police. “ACAB,” an acronym for “all cops are bastards,” appeared everywhere. From what I’ve seen over the last 15 years or so, during Santiago’s economic boom, the police have been fair and honest. I know that’s my gringo perspective, that cops are always the most available agents of the state to attack, and that there is still a palpable history here—they buried Pinochet just 14 years ago. There were initial reports of rapes and beatings by the police in response to the uprising; by most accounts, they were outliers and contained to the first couple of weeks. Surprised by a kick to the back, I watched footage of a female officer lose control in a storm of reprisal. I have seen too, on the news, a few videos depicting something like this: A police car swerving down a street to avoid pockets of fire and various objects hurled its way, when a bottle broke through and lit up the whole front seat. People yelled at the driver, now on fire, to jump out. He didn’t. It seemed he would rather burn inside the safety of his squad car.

In “Toward the Splendid City,” Pablo Neruda’s Nobel Prize Acceptance Speech, Neruda describes his harrowing escape from Chile on horseback over the mountains and into Argentina. At one point he and his guides entered a clearing, as if they were guests in some hallowed place…. In the midst of the space, set up as if in a rite, was the skull of an ox. In silence we approached it one after the other and put coins and food in the eye sockets of the skull. I joined with them in this sacrifice intended for stray travelers, all kinds of refugees who would find bread and succor in the dead ox's eye sockets. But the unforgettable ceremony did not end there. My country friends took off their hats and began a strange dance, hopping on one foot around the abandoned skull, moving in the ring of footprints left behind by the many others who had passed there before them. Dimly I understood, there by the side of my inscrutable companions, that there was a kind of link between unknown people, a care, an appeal and an answer even in the most distant and isolated solitude of this world.

The phrase “La Primera Línea,” or “The Front Line,” is used a lot these days with respect to the coronavirus—we know what it means, and we stand in awe of the health-care workers and others who are on it. That phrase has been ubiquitous during the Chilean protests, but here its meaning isn’t so clear. Ricardo Lagos, ex-president of Chile, asked in an interview, “La primera línea for what? To burn a church? I don’t know what it is, what it means.” The front line, of course, is meant to mean those citizens in the streets face-to-face with the police and the military, taking batons to the knee and rubber bullets in the eye. But as I’ve heard pointed out by our Chilean friends, those police and soldiers are likely—not likely, but are—from the same economic class and culture as those throwing Molotov cocktails at them. Thomas Hardy’s poem “The Man He Killed” catches the point, as it portrays enemy soldiers at war who have lived the same struggle and faced the same decisions, and who in any other context would have shared a pint and helped his companion “to half-a-crown.”

An older woman and her son, driving home from a visit to the hospital, suddenly found themselves on “the front line.” Her Mercedes was forced to stop by a group of protesters, or maybe more accurately, by a group of young men in bandanas. The name of the game, I’ve been told, is El Que Baile, Pasa (dance, and you can pass). The initial idea was to stop showy, luxury vehicles in their tracks and force the drivers out into the street to perform a little jig by their BMWs and Audis (it quickly morphed into various strands that have little to do with economic injustice). They helped this woman out of her car and told her to dance. She couldn’t, physically, even if she’d wanted to. Her son objected, but he was subdued. The car was sacked and the men ran off.

Forcing folks out of their cars to dance is uncivilized, but it’s also not far from the thinking of Frantz Fanon. “Kill the Rich” from The Joker and from the streets of Santiago may sound dumb and like the kind of revolution that eventually devours itself, but it’s also in a sense what Fanon was calling for when he wrote, in The Wretched of the Earth, that “For the native, life can only spring up again out of the rotting corpse of the settler.” Perhaps, in a certain kind of way, it’s now what Covid-19 is calling for as well.

The Decay of Truth