The Black Butterfly and the Mirror
|
Konstantinos Doxiadis 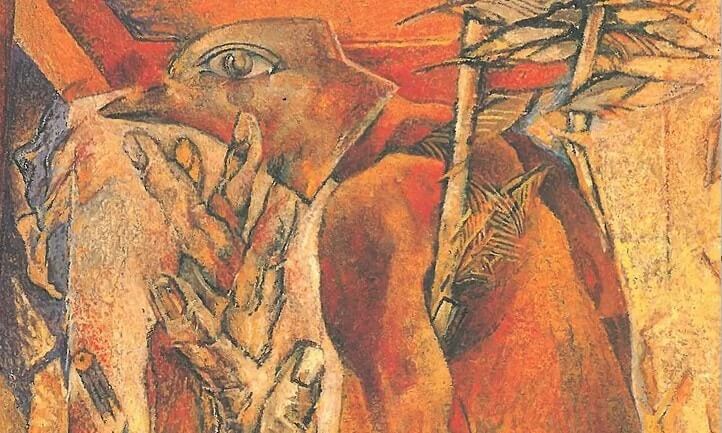 The Black Butterfly and the Mirror

I felt a slight chill as I watched the young boy, his frail body wrapped around in a dark cloak, and his face pale in the soft white light, slowly brightening from a spotlight at the centre of the ceiling.

I found myself holding my breath.

I am here, the child whispers, and his words fade in the silence. Father, I am here, he speaks again, his voice louder, and the curtains respond, pulling back from the centre of the stage, their creaks echoing across the hall.


As the boy spoke, I thought I saw a small glimmer, a dark shape flittering across the stage…

I leaned forward and squinted, but there was nothing there now.


She gasped aloud. The boy was weeping openly on the stage, tears streaking down its soot-stained face. It looks too real. Too human.

She felt his hand reaching for hers across the armrest. At first, she thought it was a sign of comfort, of solidarity. It was only after his grip tightened that she realised she had half-stood, her neck craning towards the stage.

She sat down in the darkness, flustered and embarrassed.

The man gave her a warm smile, but she didn’t see it. Her gaze was still locked on the boy.


And this time as the child arises, the cloak cloak’s no draped across its body.

It stretches its bony shoulders out and throws its head back, neck bared against the light. Father, it calls again, and then once more, shouting, Father!

And this time, this time the stage comes to life.


There! There, look at the people at the edges! Can you see them? Her hushed whispers warmed the little girl’s cheek – she giggled, enjoying the attention.

The mother took the little girl’s hand and guided it to the corners of the stage, where the first actors were entering.


The cast moved quickly and rhythmically, their steps in sync. Behind the stage, a thin Italian man with a dark moustache was tapping his left foot impatiently, counting the seconds.


And amidst the turmoil stands the child, looking smaller and frailer than before. And the black cloak now stands out against the moving mass of colours. The child curls into a ball, quivering in fright.

Then, suddenly, the mass freezes, and a large man strides forth, towering over the child.

Boy! He exclaims. You, boy! Where is your father? And the child cries out in fear, for it knows not where its father is.

And indeed, as cast began to move once more, the boy sat frozen on the floor.

The young man with the paper smiled, and the couple on his right looked across disapprovingly and tutted.

Three rows ahead, a middle-aged woman with a leather notebook nodded in approval. Nicely done, she thought. Nicely done. But the black-ink pen remained capped in her hand, and no words appeared in her notebook.

She would recall this moment for the next three days.


The play moves on, and our story progresses: a small village, neglected and betrayed, at the very outskirts of a beleaguered kingdom. And the people, moulded together by pure hatred and spite. The roads reek of poverty and dirt. And throughout the land, past cold-soup meals and off-beat Sunday church bells, the village has no life.

All we know, we know from the child. This poor, young child, walking alone through the night.


And then a break. Muted clapping and murmurs, and before long, the curtains are drawn back again, and now we’re in a cottage.

Afore us sits a man, roughly thirty in years, with a large shock of dark, blonde hair. Behind, rocking a sleeping babe by her teats, sits his wife.

Misery, pain and time. Always time. The precious little time they have left to themselves as the woman’s cough worsens, and the debts on the man’s desk pile up.


A woman in the first-row sniffled, and the man behind her wiped dry eyes.


She turned to face her husband, her eyes imploring. He knew that she hated death and tragedies.

He looked across apologetically. How was he to have known?


The father is alone, bar the babe, that is, swaddled tightly to his chest.

For some reason it is snowing, and hundreds of small paper squares are raining down on them, poured from wicker baskets just above the stage.


One of the boys holding the baskets sneezed, but thankfully, nobody heard.


The father leaves the babe at the village school’s wooden porch, and breaks into a brisk walk. He only starts running when the babe cries out, and so the lights fade with its tears.

Back to the present.


But three boys were sniggering.

‘The one in the red,’ one of them whispered, ‘the fat one in the corner.’

‘Wasn’t he at the other side before?’


But the boys were wrong. The fat man in the red shirt in the corner was in the exact same position at the close of the first act.

Now there’s a commotion, and the villagers cry out in glee, for an ugly old woman with a crooked back has entered the scene. And they shout and they laugh, throwing stale bread and stones at her.

And the woman in the first row – the one who had sniffled before – stared at them with pure loathing in her eyes.

And the man behind her. He – he didn’t react.


Only the child is kind to her, this poor, crippled woman.

Only he treats her with humility.

I smiled at their encounter. And then again, as he gifts her a beautiful red flower, while the rest of the village stands behind, mocking and jeering.

The ugly old woman with the crooked back clasps the flower to her chest. She inhales. First with her eyes, and then she takes in the fragrance, the petals falling soft against her cheeks.


These are the only kisses she will know.


And the child stands tall once more, and says:

‘Sing. Sing for me, old woman,
and tell me all you know.’


The stage went dark, for just a moment, and then a soft light emerged, focused on the child’s impassive face.

And she says: ‘Don’t ever tell them, child,
How ugly they become
They who jeer and laugh
While standing on the sidelines’

And she says: ‘Don’t ever look
Another in the eyes
For a mirror you shall find
And only then can they break you.’


And then there comes an angel, locked inside a cage.

And the young woman in the front row was tired, no longer able to express her disgust – and the man with the loose sheet wrote ‘Repetition!’ and the couple beside him frowned – in part with the sound of his scribbling, and in part with the play – it was all too –


And then the child, the frail, forgotten child pushes past the spiteful masses, facing off the light.

And as the angel turns, the boy cries out again, and says:

and tell me all you know.’

And this time the whole stage went dark, and not even the young boy’s face was illuminated, and the man in the third row, felt a chill running down his spine.

And the angel says: ‘If peace is what you seek
Redemption for your beauty
Then all you need is strength
To tear apart your wings’

And he says: ‘Don’t ever look
Another in the eyes
For a mirror you shall find
And only then can they break you.’

Tribute to the songs: ‘Black Butterfly’ and ‘Mirror’, by Alkinoos Ioannidis.

The Black Butterfly and the Mirror