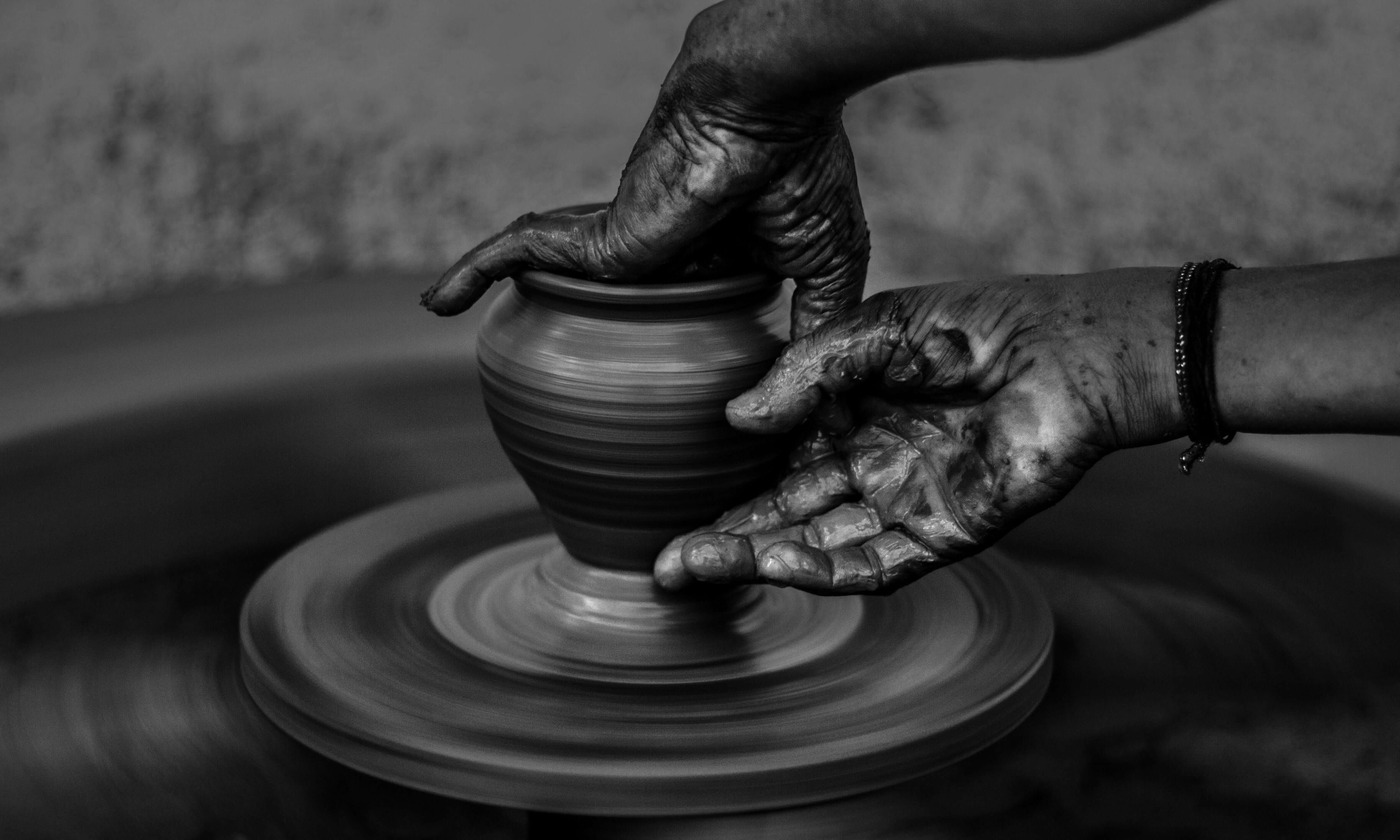 Cups and plates and mugs and bowls line the cupboards of most of the houses in the little town of Braunton. They were used to feed, for decoration and drink, to share between friends or to appreciate alone. Not living nor breathing, but nevertheless existing, the pottery sits—do objects sit?—and waits for someone to carry it out for its performance. Do their hands feel the hands of others, waiting to be held? Can they feel the warmth of each maker’s breath? Occasionally they will break into smaller pieces—accidents happen, I’ve heard—and they make their way back, alongside small bits of plastic or glass or discarded paper, into the ground. And while their journey ends there—or pauses in the circle of continuation—their life stretches back further than the eye has yet seen.

Alice was a maker of pottery. She had never been sure about those words as the title of her livelihood. She bought the clay online, never too cheaply or expensively, within her means. She used her feet to power the wheel—was this sufficient to call her a maker?—but had not herself made the mechanism. All she did was apply pressure with her hands to mould the malleable clay. She fashioned all kinds of objects: cups, plates, bowls, little figurines. Perhaps Alice was not giving herself enough credit, she also used to paint glaze over the crockery. Her style was light colours as the base with either stripes or spots over the top. But the word maker felt excessively grandiose, as if one needed to have created the world or universe or laws. We are all makers, someone might whisper, but without each other we make in vain.

Joan happened to live by the sea, along a beautiful stretch of coast in North Devon. She worked as a teacher but on her weekends and during her holidays she used to extract clay and send it to a local potter, Alice, of whom she was rather fond. What some might have found an arduous process, one that involved digging and hammering and soaking and screening, she found to be peaceful. The sea teased its shores, running far away each morning and trickling slowly back as the sun drew down. Its green-haired companion watched it as it came and went, flashing its golden smile morning and night. Joan would carry her clay spoils back from the beach and up the rickety, wooden path to her cottage overlooking the edge of the world. Alice frequently sent her figurines or mugs as a thank you for the clay. Joan enjoyed admiring the end product, knowing its parents had been the soil, and she but a guardian.

Nature reclines and arises, both under and over and through. They are never lacking: what leaves Them behind always returns. Their cups and plates and mugs and bowls—does Nature have this language?—swim through their body, waiting for an eager hand to guide them out of the womb. Time keeps rolling, oh doesn’t Nature know it, with new peoples and styles and religions. People take their ingredients and make them into marvellous creations—just look outside, the world is full of man-made wonders. But are they man-made, that same someone could whisper, and who made man? The hand that digs and the foot that presses and the fingers that shape and the mouth that eats. Nature holds a million hands and feet and fingers and mouths under their skin, awaiting the next people, never holding their breath.

Scheherazade Loft is a student at the University of Cambridge and an aspirational writer.