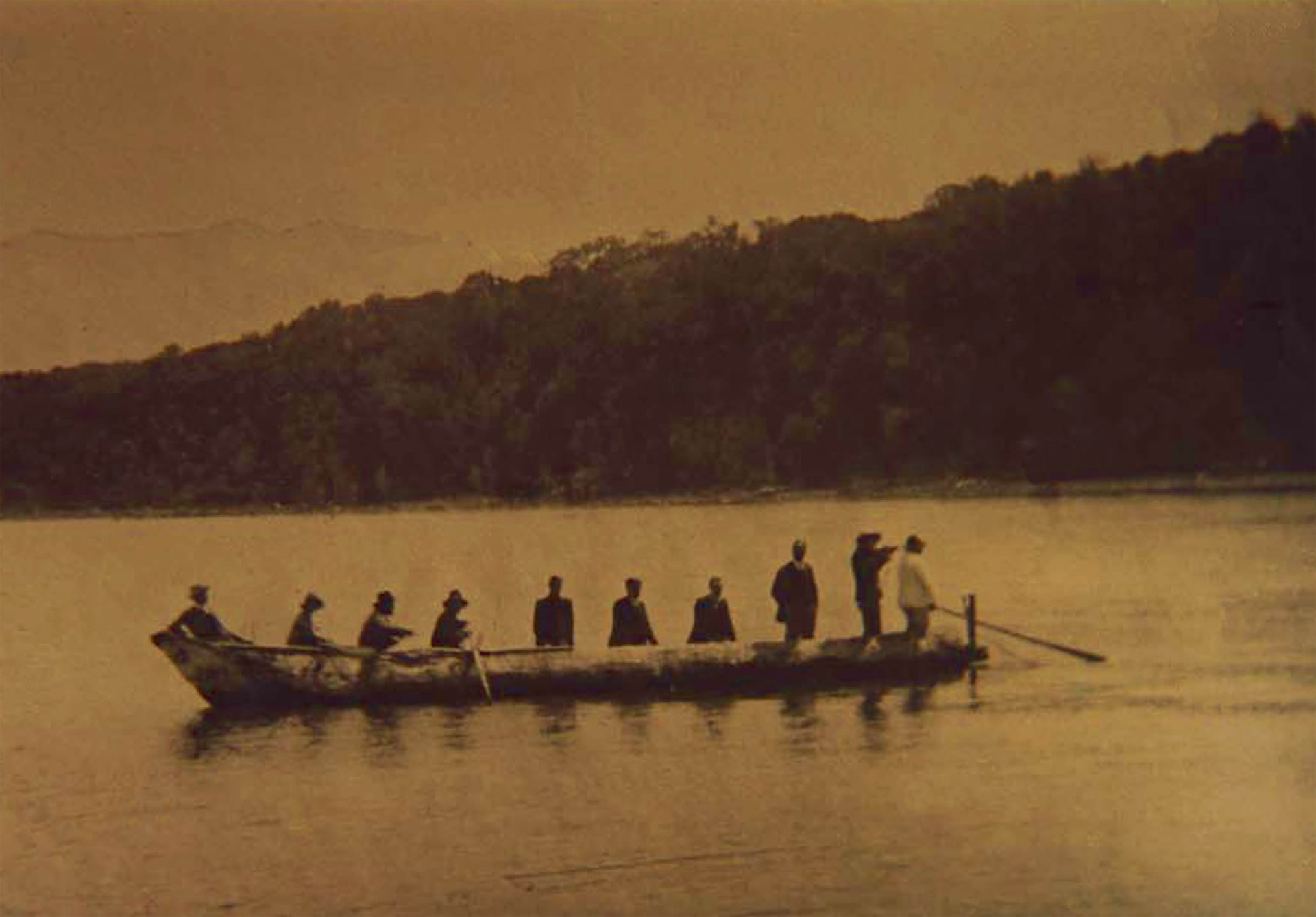 I know what you are
a whirlwind emptying out into itself
a cup of flowers and silences
a dagger of frozen air
a wingbeat
a quake
a window.
‍
Ay, if only you knew what you are.
‍

‍
Oars at Twilight in the Imperial River

‍
When the hours burn
and so sweet a poison fills the air
we go to the island found one afternoon.
The oars sing in the water
the oars kiss in the air
frenetic
sonambulists
the oars in the afternoon.
‍
Amidst the seasons of willows
in the moon flesh of coigüe trees
the oars roar in the rapid
current that bears and reclaims us.
‍

‍
Good night
Jorge
I looked for you at the Orly Hotel
like we agreed
you weren’t in Buenos Aires and you’d have liked
the blaze of fallen leaves at sundown
you were in La Ligua
you were at the Cloud Hotel
with your suit of a gentleman from Cautín
the one you wore in the final hug
next to your father’s tomb
when something like an angel lay down beside us
‍
may this not be a verbose homage
may this not even be a homage
may it be like walking by and greeting you
with a wave of the hand
as we hurry off to nowhere
good night
Jorge
‍
I wonder how you feel on the other frontier
you’re smiling, I think
you’re shrugging your shoulders
but with affection
with a kind of mercy for yourself and for us
above all with grace and kindness
curled up as you are in our hearts
full of love and gratitude
for what you were and are.
‍
(for Jorge Teillier)
‍

‍
Love gave me the river
that night
and the dogs
shook their tails with the rain
of May
I kept the prodigious meadow tucked away
perhaps stolen one afternoon
in a rowboat with a book.
Remember
mother
the exact day of the event
the boat at sundown readying its depth
along a path now badly illuminated
by toy rods
by tillers of fire.
Neither that boat nor the dream
brought me back to the game
with greater truth and flight
than was in my ember.
‍

Omar Lara (1941 – 2021) was a vital referent in contemporary Chilean poetry. I have translated a few of his poems to celebrate his life, gathered from the book Voces de Portocaliu (Voices from Portocaliu), published by La Cabra Ediciones in 2012. Lara was born in Nohualhue and grew up in Nueva Imperial, in the Araucanía region. He was founder and editor of the long-running magazine Trilce and taught Spanish language at the Universidad Austral in Valdivia. He spent four months imprisoned under the Pinochet government until his posterior exile in Peru and Romania, where he grew interested in translation, bringing Chilean poets like Jorge Teillier into Romanian, as well as Romanian poets like Marin Sorescu and Mihai Eminescu into Spanish. Portocaliu, in the title of the poetry collection, means “orange” in Romanian and gives the name to Lara’s imaginary place of reencounter for poets and loved ones. His generation has been referred to as “dispersed” or “diasporic” because great talent was scattered abroad and worked without too much recognition from either home or adopted countries. But this also produced new cultural affiliations and a richness of inbetweenness, in which styles were created that drew on regional imaginaries yet connected to broader philosophical themes.
‍
The poems here suggest Lara’s range. “Little Diary” emphasizes the gap between perception and reality, or perhaps between the perceptions of two people, as it leans heavily on the subjunctive of the last phrase. “Oars at Twilight in the Imperial River” offers a rhythm of repeated words and phrases along with the propulsive visual formatting of frenéticos, sonámbulos. The stillness and painterly quality of the scene is interrupted by the last line, which cuts off at rápida and continues as corriente on the next, an active splice. The Imperial River is located in the Araucanía region of Chile in the South, home to a confluence of Mapuche indigenous, Spanish and Chilean influences, and the riverway is traversed by many different peoples. It is also home to a great deal of plant and tree life, as the reference to the coigüe trees hints (a reference I decided to keep in Lara’s spelling, rather than change to coihue). This is a local poem but it also suggests the cycles of death and life to be found in nature and history. Following this is the short poem “Bargaining Table”, just two lines, intense in its compression of the relationship between the dominant and dominated, and the pretenses and coy reversals this might contain. One can read into it any number of specific situations.
‍
“Good Night, Jorge”, written after the death of Jorge Teillier, is a loving homage to the famous Chilean poet, very important to Lara. Teillier’s imprint can be sensed in many of Lara’s poems. Lara’s name itself is linked by poetic chance to Teillier’s most influential idea, the lar, which refers to “the hearth, the family home, roots and place of origin”, as Lucia Guerra-Cunninham puts it. The lar is a profound notion linked to the search for the essence of reality, to the poetry of ancestors and childhood, and ultimately to the Roman idea of gods who protected the home. It is also linked to a melancholy that pays homage to the past without turning into nostalgia. For Teillier, Lara and others, this home was displaced and dreamlike, in the mind as much as in any physical space. Although the lar may become an obsession, one can never return to it or to history; it is only possible to live in the new poetic worlds that one creates. This is true, also, for human relationships. Lara’s poem for Teillier acknowledges but does not lament his death, a part of life. And in a sense Teillier remains real through the eternal present of his friends’ memories and verses.

“Blue Forest” is a poem that further expresses Lara’s oneiric sensibility. The South of Chile is home to indigenous peoples with a deep spirituality, connected to the natural world around them. Lara’s poem of love and imagination refers to small things in the present such as a boat or a book, but also evokes a dreamworld of blue beyond this our world. Ths dreamworld is, perhaps, the true world, accessible at transcendent moments or in death. Lara himself is not an indigenous writer, but he was intimately connected to this tradition, and his set of references is reminiscent of the Mapuche idea of blue, as in the famous poem by Elicura Chihuailaf, “Sueño azul” (Blue Dream). Blue (kallfü) represents abundance, order, the universe, life and the sacred. In the Araucanía region, these ideas permeate all things and living beings, whether or not one is a Mapuche oneself, and Lara carried them inside him with respect while living in other countries.
‍
Today Lara’s work connects to invisible flowing rivers beyond those we can see, but it also speaks to the things and people on this planet that can very much be seen and felt. La Frontera (the historical name for the Araucanía region, still used today) is a world of police violence and blazing fires and natural resources that must be protected, but also of tenderness and ritual and glorious trees and mirror-like lakes. I write this on a day of drizzle and white sky in Santiago, hoping that Lara has found his new world of color, be it orange or blue or some quivering, shimmering combination where he is reunited with what he finds meaningful, “on the other frontier”.

Jessica Sequeira has published the novel A Furious Oyster, the story collection Rhombus and Oval, the essay collection Other Paradises: Poetic Approaches to Thinking in a Technological Age and the hybrid work A Luminous History of the Palm. She has translated many books by Latin American authors, and in 2019 was awarded the Premio Valle-Inclán. Currently she lives between Chile and the UK, where she is based at the Centre of Latin American Studies at the University of Cambridge.