Dreams of the Minotaur
|
Michael A. Dann 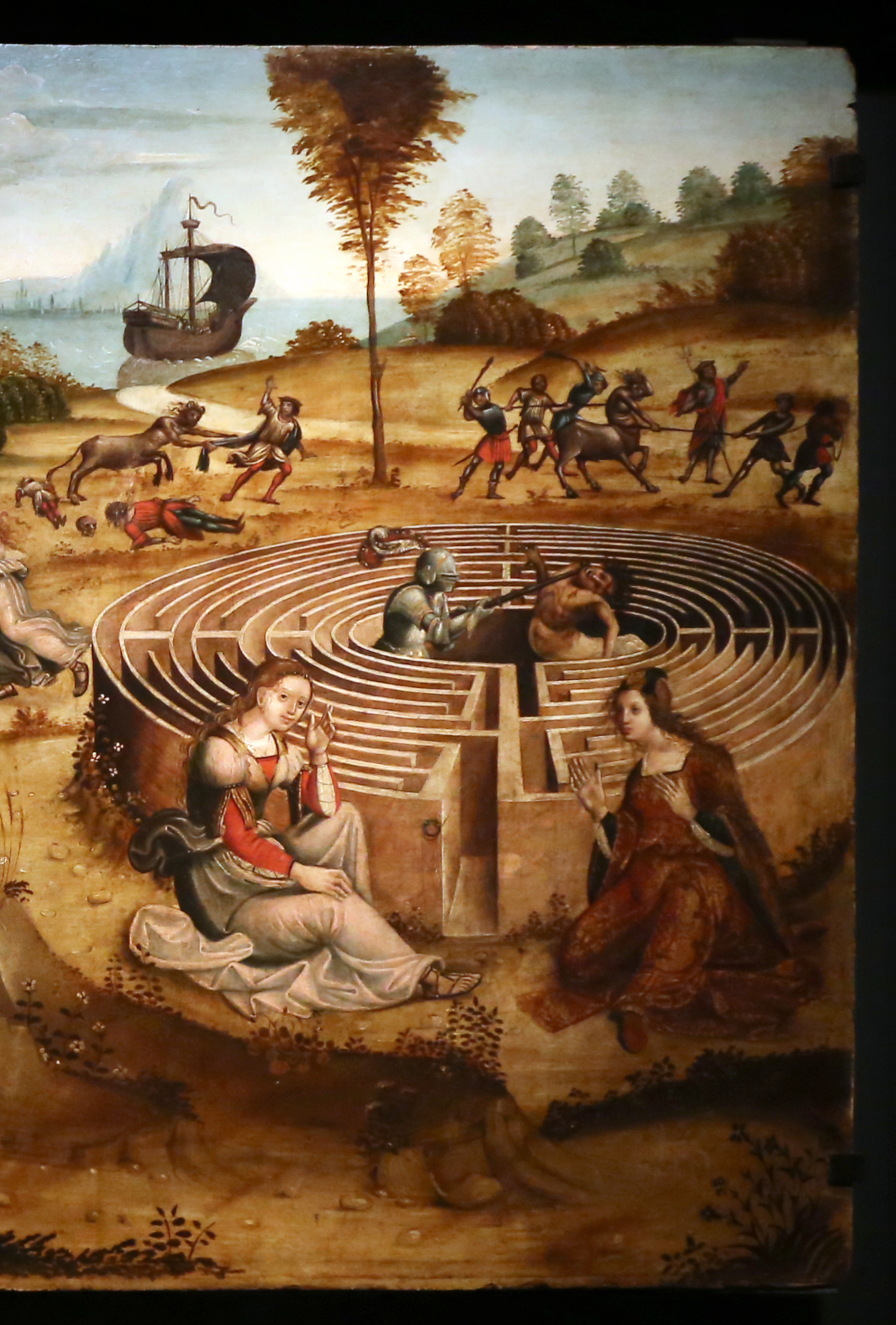 All language is a set of symbols whose use among its speakers assumes a shared past.
- Jorge Luis Borges

The Kingbeast rants a maze unlit by science. His hooves imprint on cobbles clayed with blood. Through darkened mirrors he sees a great mind looking back, proud to see himself at war and noble. He is however, and by any honest assessment, a lowborn man greatly at war alone against himself.

Under a blood throgged moon, he turns the tempest trail to cross an unseen border into that kind of madness whose cure is rarely spoken and never judged for cost. Running deeper still into his maze, he fails to span the gulf between a life devoid of ethos and an undying lust for fealty. A beast to battle born—it is no lie. Conquering limbs astride indeed, but he is a warrior against reason, against merit, against science and ultimately, against his own failed destiny.

His foot gives name to the downtrodden and his voice steals light from the blind.

Cry, immortal stain! Cast down from higher hills. The brazen giant of lore is a study that scholars name by scales: A single form, less beautiful. An un-sparked soul, congealed from stomic taurine mud and abandoned without pair by Noah whence he sailed.

Inside that rasp-furred hide slaves the heart of a puffer-fish and lisps a three forked tongue caughtered from the mouths of a demonic bull, a venom-less rat snake and some terrible kind of filth-eating snail.

And yet a fabled regency falls to the goated foon. He draws in his wake a circus narcissus of spiral-maddened bombasts. In darkest night he gibbers pant-less to their gathered sophist void. He darts to din and charges every songlike noise inside his forlorn maze.

He strides his nine warm rings like something lately doppleganged for a whiskeyed monkey in flight from the Barnum Train. As the ringmaster for a New Arcadian destiny he prims to pomp in a tailed red coat worn backwards. He flourishes a chewed-brimmed top hat as if he is the equal to ancient Moses and that cap is kin to some other carved ten-law stone.

He would compare himself to many from history had he ever read a line of it, but history will only compare him to Ibrahim the Lunatic. And who can say? Perhaps New Byzantium will also be saved to see our Tyrant replaced by a more competent six year old who was drawn for the task still wet from his father’s drowning pool.

Recently crowned as Minotaur, he traverses the spiral at random and he enters the frame at rage. Never has someone filled the sacred space so loudly. His roar below turns wheels of sin within those wheels of stone. Unlike other kings there is no hush when he strides the publicon. Like a plague-year cough of black bile phlegm his entrance brings no hope to those whom any hope obtains.

Confronted by luminant discourse his gaze will likely flee the room. His eyes careen unlinked, like spheres of stibnite sulfur unbound from the cold lunar caustic that howls in his shouldered alchemist jar.

There are frames where the mask looks shamed by the beast which wears it. A phrenic terror flashes and in that moment the legend of the tunnels seems decoupled from the monster by the shore. Briefly it appears as if a slithy little mouth-assed jumping creature has accidentally infected a spineless host. Behind Olympus a Thalian parasite lept onto the neck of a chanterelle-brained protist dupe that came running pink-haired through the wet jungle at midnight.

Those in witness return their gaze and see an ox-faced ram before his mewing mass of Stockholmed hostages. His oratory draws dimwitted forth, much as a cannon’s shot draws eel to the surface of a night soiled moat.

Those who schooled past years when edible crayons were wise are in their ages awed by the beast’s inability to forge a single sentence. He offers to the couch worn masses a balm of fact-less rancor screamed against that old tyrannic press of wit. To equate, as many, many scholars have done, his intellect with Neanderthalism is to disclaim a terrible slander against those honorable tool bearing ancestors, whom we also vanquished.

Alas, this is no kind of moral warrior down to the later ages of his mythos.

It is instead a meat flora’d cretin of pederastic concern. He blubbers through the day and through the night he fulminates from an unchecked weal of polysomic infantilism. His song is a sputter of bleached grey noise whistled from a bung-mouthed pumpkin. The little hands gesticulate wildly with a mania that is generally common to those who have survived quarter and even half centuries of sybaritic consumption. Overall, the in-athletic nature of his performance invokes an opiated St Vitus’ palsy induced by chronic onanism, a stark terror against scientific knowledge and, a steady diet of liver-sweetened bone-fat.

Throughout history great leaders of men are celebrated as lions. This one is something else. He is a powerful but incompetent Minotaur. He navigates the maze as if becoming lost is a form of victory. He is an enemy to day.

Yet he will doom us by our sevens unless we brick away his portal and exile off with Ariadne any further tellers of his tale.

And Here Do I Marvel