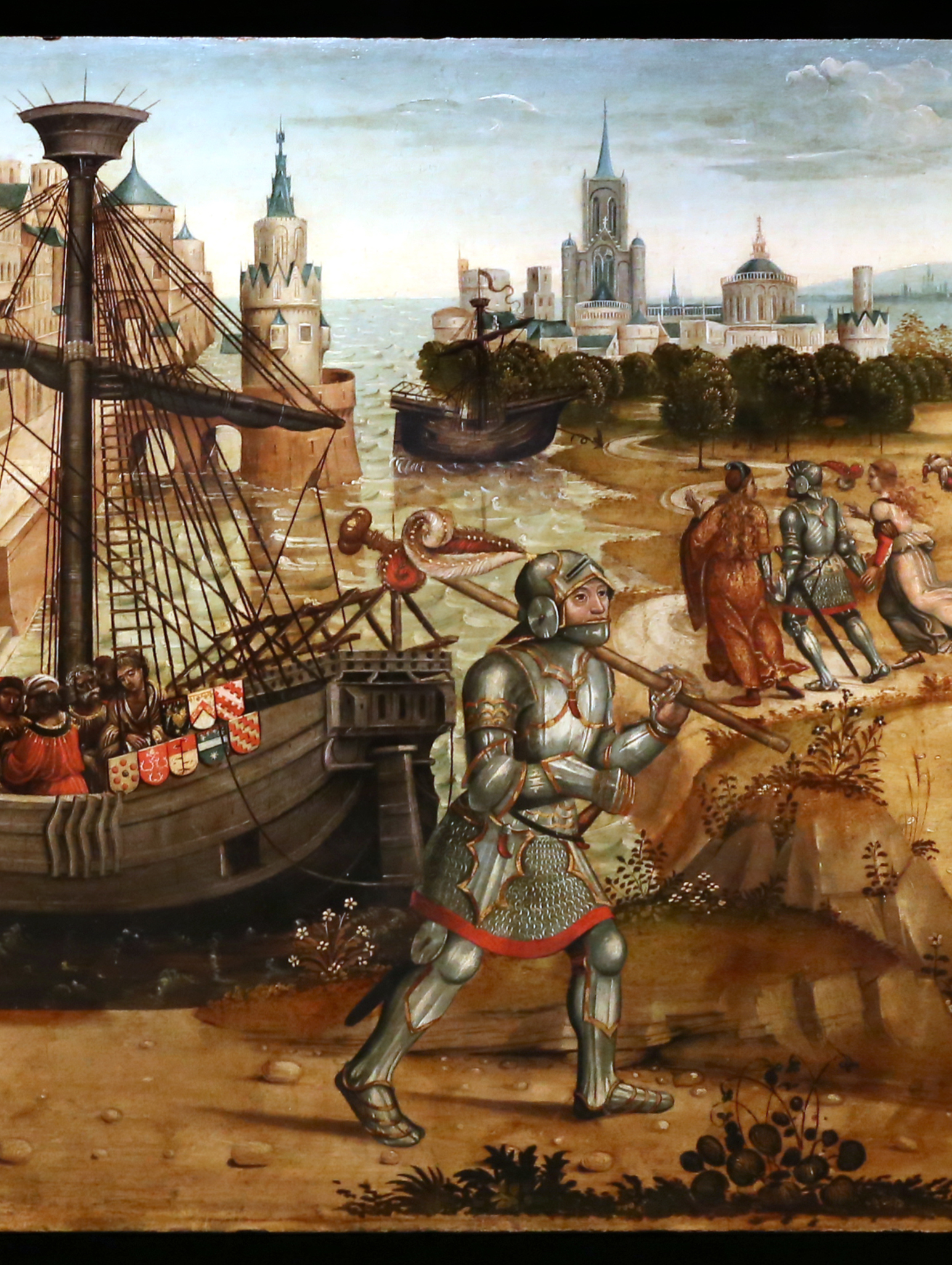 In general, every country has the language it deserves.
- Jorge Luis Borges

If the present world go astray, the cause is in you, in you it is to be sought.
- Dante Alighieri

Westward, The Course Of The Empire. The tang of a Great Plow forces history to roll up before it like a curling wave of loam. See how deeply The Earth might turn before an un-shamed blade. The terrible combine throws up fear, it throws up rancor. A storm of dust behind the horizon.

Sometimes that distant puff can mark a lone champion, riding nigh. Sometimes such dust is raised by the relentless approach of pounding feet under a column of strongly armed madmen. Thusly comes a new parade led by a darker yeoman who seeks to rake the world entire under the merciless scythe of our absolute destiny.

Arcadia rises behind men of force and power and above else, noise. No matter that a terrible cleaver awaits those who fall behind into the shadowed dragline of every great society’s march through time. Moral pause is manifest weakness. Join ye proud and join ye gay by the cause to sing along and muck as your new laughing drover calls clarion.

Now you see the mendicants chuckle and now you stand up, convinced. Testify lad. Who would not be comforted against fear? Indeed, a grateful populace did not even know to be afraid before He arrived in humble service to warn them. Mock ye those fools who refuse to heed his call. Refuse to kneel in fear, to tremble proud and brave before his rant. Deaf the singers and dumb the scholars that empower sheepish hope against your crier’s steel. You will testify in fists before the coming day turns lit . To bring such peace unasked, you will cry the song of blood.

They say that he was touched. Some kind of healed and risen simpleton. He stands the day a gleeful conductor of that colossal hoving wagon. Only He can orchestrate the reins and traces into such a masterful weave of bedazzled fanfare. Great men have thrown themselves to the dirt, giddy just to weep before his awe. Oh cry for the multitude of beasts that he alone can tame. A marvel in the rage as he scats forth, oxen, ram and mule.

You’ll not count yourself as one of the burdened or yoked until the hours become suddenly later than hope can dare restore. How can you? Here in the brightness of these unfolding days of power. Days of pride. Join them strong, across the prairie marching. Gandy Dancers, building rail to escape an empire which has birthed them un-redeemed. Climb up boys and blissful, join the fray.

He promises He will restore the better times of olde. Never mind that there has yet been an easier age than this. “Dance” he spryly calls and oh how the orphans plod. Fiery eyed as they pound heel to the ancient boards of reason’s deck. The royals will work the fields of filth and the fields will become the castles while ancient towers glow and burn so bright. Soon enough you will wake to a brighter morning, and proud. Leave your cares behind for a novel tune that He alone can call: Dance pilgrim.

But never look behind to see the teaming wake. A grand reaping such as this now promised comes along in rare centuries lad. Only a fool would question The New Leader as we stand so late before Utopia’s fruited garden. Always so late. Smile and believe and dance is all you need to do and why not? Sure he might ask your boots to help draft the load. Stomp you a while in sultry mud. Only in service to The Cause though.

Still it must be warned pro forma: doubt the movement now and your own policing guard must count you quits. SPQR. Mind you not show weakness son or you from His legion they will hasty cull. Do not be seen to watch the newly doomed as they fall behind in the trough. Refugees of peace thrown from the platform and left sotted and moaning. Soon their cries will fade behind in trailing fog. In trailing mud. No, turn not nor hesitate. Even as your neighbors pass to gone behind the vessel and under snapping traces fall.

Behind His rolling derrick the truth is an unknown plague which old women alone can taste on the flat morning air. His plow runs mysterious. The Revolution throws a row too wide for any man but Him to see in breadth. Sadly of course it must upend stray innocents at the margins but these are prices paid, and small, that the less deserving suffer to channel a greater path. Your vigor leans with the colossus to help channel a greater path.

Only apostasy cries that the sacrifice of innocents is not the margin but the main. The righteous line flies past below where the greater blade you weigh turns clod. Through fields of lore the driving beasts will bey. Fields of poppies weeping. Pay no mind if the moldboard teases edgewise through a consecrated plot. Toil now for we will all laugh together again and soon. Though He’ll have you say the vow again out loud:

Ride well the coat-tails of your buffooning master and yet in Arcadia you will one day sleep. Chin to the f’wrd rail. You will sail before this mast or you will sleep beneath it. We will laugh at this disaster soon, together of that prouder day.

Hark not that behind your hero’s team weals mud. And yon mud is turned for clay by the march of your own and very feet. You are among the brethren now. All true citizens will suffer this service: To slog the chosen herd as debt against His revolution’s future plenty. You’ll serve on dirt the proud behemoth as Leader stands the prow in gilded cloth. You will ride his deck soon enough in glory. In glory and in glee you will one day ride The Plowman’s deck again.

Unless you fall in doubt for what your service doth obtain.

Never turn your view to see what pain this purpose leaves behind. You must refuse for all your aging days to ever once admit that this row was cheated soil. Cheated Earth that yet becomes upturned for a more vengeful Master’s cotta.

Oh lad, why can the young never heed what the old sing so loud with their silence? The rhetoric of revolution never limits its vitriol to words. We will not laugh again together. The carrier that slips the clay of revolution is never less than blood. And whose blood will be y’orn boy.

And whose blood will be yorn.