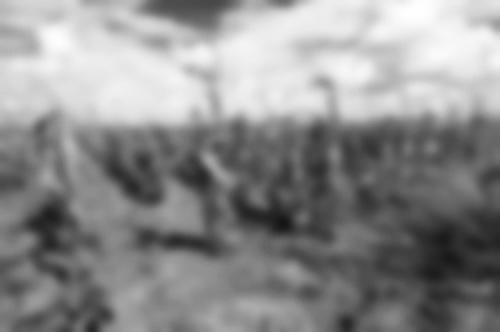 I started today with a song. Then listened to another song.

Dispatches from a close future reach me, barely. Like charms, but charred from heat surrounding cargo holds and bent, from sitting in the sun for too long. The hooks used to connect them to silver crooked, broken. Each in a different hue, dyed from neglect. Getting forgetful about cleaning. I stumble on tokens at strange times, when looking for an old journal, a framed photograph. I don’t tend to throw things away. Leave habits behind for new mistakes, mistakes we want more of you, I hear from it more than a voice. Tell us what you need.

For a long time I kept only one chain, orange charms spaced on it evenly. But it got busy quickly, after I found a strawberry earring to loop onto it, then blue beads I glued together in a clump I twisted on, a small eraser shaped like a shoe I fastened to it with double-sided tape, a hairband. Adding more and more nothings onto the bracelet, making it too heavy, bulky to be worn casually. I don’t know why I’ve kept it. It’s impossible now to identify what it was made for. I guess I’ve been walking further and further away from recycling centres, where I could’ve composted the trash I turned oranges into.

For the first time in more than a while, I’m writing in the middle of the day. I visited a cemetery recently, one without my grandmother’s name but I’m haunted, struggling to hear her voice. Less an echo, more an extended groan. I'm trying to walk out of a falling, sinking and stuck to the feeling I get when I’m not sure if anything I’m doing is coming from me true.

To say something out loud. I don’t think to do it, for sentences that seem obvious, sincere. They live so distinctly, as pillars inside, unshaken unless cracked too hard. To say, ‘you matter to me’ or ‘I miss you,’ I think they’re so obvious I needn’t say them. But I can’t count how many times I did, to her, when she could have heard. Words I memorised long ago I forgot to remember, remember to share. I must have learnt them early to locate as many opportunities as possible to use them, distribute them. I started speaking at seven months; there’s been a lot of time since then.

I’m writing in the middle of today. An interruption of some steps I wasn’t carefully considering, after emptying a store of its last pumpkin before visiting another where I bought a notebook, to when I started a new book but decided ‘nah’ ate an apple no it was a pear, and then again, I didn’t really do any of those things. Not exactly, in that way. Not in the tone the arrangement of them implied.

It sucks me in, the state of mind of not sharing anything, feeling clearly. I swim alone, in and under waves, occasionally bobbing up to talk. When I do, either I don’t know what’s going on and talk over my knowing of that, confidently, incomprehensibly. Or I’m sharing something I spent so much time thinking about at an earlier time it exits me smooth, even if I’m tentative. Or, when I’m feeling earnest, I can’t complete sentences. I’m often unable to finish any

when I’m actually speaking in the moment, pushing past the scrim of ambivalence, I turn into seaweed

I have an inkling of something.

A sense of tone.

A gesture of where I could go.

a story: it’s delicate
a flutter in the breeze but inside there’s a force

I can feel it beginning to find its hum

this, it doesn’t seem to want to be new, plant a foot in the sand in a shape all its own, defend the mark.

No.
It wants to shift

Leave some vibrations in the echochamber of the air.

I started today with the ghosts of orange groves past flying through waves to my tongue, I can still taste them. I saw a peel when I woke up to my alarm. A squirrel had stolen one from the tree near my window, they’re always lingering. But they can’t catch up to it, the tapping of this pen on a desk, after they’ve left their scent behind. A brightness with aged nostalgia, the kind that’s not poison nor salve but something in between.

I’m not an honest person.

If I were to count the amount of times I choose silence over speech, it would become more than obvious: I leave too much unsaid. But writing isn’t exactly speech nor silence; not poison nor salve but something in between.

I seem to see signs of endings everywhere and I’ve been malnourished, refusing to acknowledge I need some too. With only green or mouldy oranges in sight I’ve been listless, hollow, a nerve. I’m too easily distracted, waiting for a sentence to ripen sound. Soon I’ll choose what to frame and what to throw away, later today visit a recycling bin. Maybe then I’ll hold enough room to hear one, when its time arrives.