The journey of Cavafy’s poetry through history
|
Vasiliki Poula 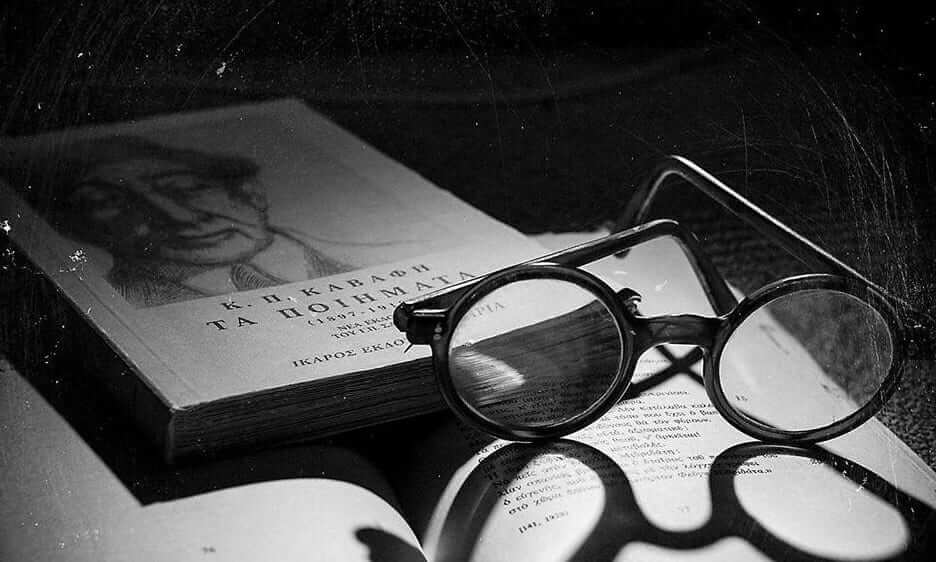 [et_pb_section admin_label="section"]
[et_pb_row admin_label="row"]
[et_pb_column type="4_4"][et_pb_text admin_label="Text"]Cavafy called himself a poietes historikos: a poet-historian, or historical poet. It was through history that he found a way of understanding, coming to terms with and even sometimes, escaping his own confined life, which he describes in ‘The Walls’:

Without pity, without shame, without consideration
they’ve built around me enormous, towering walls.

With the breadth of contemporary life shut out, he could concentrate on the long corridor of time and its intricate play of ironies. He was born both behind and ahead of his times, he flew both too slowly and too high, as Forster commented. Maybe it is this combination of Cavafy’s elegiac, unmistakable tone of voice that feels like the voice of the past, like the voice of Alexandria personified and his exploration of the ephemeral, the marginal, the personal, a weighting of the hated present, being lacking, against the beloved past, which makes the readings of his poems feel at one like a revelation and rebellion – for instance, in ‘Dangerous Thoughts’ he goes back to the 6th century AD to speak through the lips of Myrtias, a handsome young Syrian student in Alexandria, steeling himself to follow his inclinations regardless of what anybody thinks of him:

His poetry owes much to his engagement with two very different historians: the Enlightenment Englishman Edward Gibbon, whose Decline and Fall of the Roman Empire took a dim view of Byzantium and Christianity, and the Greek romantic nationalist Konstantinos Paparrigopoulos, whose work constructs a line of Greek identity from ancient times to the modern nation-state. His poems, often set in doomed Hellenistic kingdoms on the outskirts of Roman power, engage with the crude and ephemeral nature of all temporal power, a source of both consolation and regret. And as public identities blur, the poems are defined by a scrupulous suspension, an ambiguity of whether he is referring to self-delusion or heroism, artistry or conceit.

Except for Cavafy’s historical themes, though, he also engages with language itself in a historical way. The efforts of inter alia Mendelshon, Dalven, Mavrogordato, Keeley and Sherrard to translate him all have their fine moments, but it is impossible to reproduce in English Cavafy's subtle blending of Greek’s two very different registers – demotic, the vernacular speech of the people, and katharevousa, an artificial dialect introduced in the nineteenth century by government officials, and in Cavafy’s time considered de rigueur for high literature, as well as for technical or legal terminology. Mendelsohn has attempted to create a modified version of Cavafy’s ‘hybrid’ language by drawing on resources native to English; in particular by using high-sounding Latin terms to evoke the ceremonious luster of Katharevousa, and gritty Anglo-Saxon words for the idiomatic demotic. Nevertheless, Mendelsohn himself admits that this approach is only an approximate parallel, providing two examples:

In ‘The Seleucid’s Displeasure’, which is set in the time of the crumbling Hellenistic monarchies and the emergence of the Roman Empire, the Seleucid monarch Ptolemy VI is on his way to Rome in order to appeal for aid. Ptolemy refuses to appear before the Romans in his formal attire (as another Seleucid monarch believes he should), but chooses instead to dress as a beggar, setting aside his kingly dignity in a shrewd acknowledgment that there’s more to gain by appearing shabby. For Mendelsohn, the force of the passages hinges, primarily, on the shift from the classical-byzantine word ‘epaiteia’, which he translates as ‘mendicant’, to the demotic ‘zitianveo’, which he renders as ‘to beg’:

But the Lagid, who had come as a mendicant,
knew his business and refused it all; he didn’t need these luxuries at all.
Dressed in worn old clothes, he humbly entered Rome,
and found lodgings with a minor craftsman.
And then he presented himself to the Senate
as an ill-fortuned and impoverished man,
that with greater success he might beg.

In the first example, though ‘mendicant’ is redolent of the formal starch of Katharevousa, its arch-mandarin stiffness seems arbitrarily inserted rather than emerging as part of the established speech pattern, the verbal exigencies and energies necessitated by the voice. ‘Beg’, on the other hand, is a bit too blandly colloquial to stand out from the other colloquial phrases around it (‘knew his business’, ‘sorry state’, ‘they have at bottom’), and the word has become so common and unimportant its force is almost innocuous in conveying this extreme psychological state. Part of the problem is that English is moving between high and low registers all the time, and even a simple sentence can produce this effect without calling special attention to it. Mendelsohn’s impulse is in earnest, but the verse seems to demand a more daringly inventive, and more verbally active, solution, one that would use the vulgar tongue to get at the vulgarity of turning the posture of abject humiliation to one of calculated prostration, regardless of whether or not the word choices fit the macaronic crossword puzzle.

In the second example from ‘Days of 1909, ’10, and ’11’, the shift in diction is between ‘perikalles’, an ancient Greek word that Mendelsohn translates as ‘beauteous’, and 'agori', a demotic term that he renders as ‘kid’. The subject of the poem is an extremely poor boy who works as a blacksmith’s shop by day, and then, so that he can buy the elegant clothes he longs for, sells his body at night.

I ask myself whether in antique times
glorious Alexandria possessed a youth more beauteous,
a kid more perfect than he — for all that he was lost:

The choice ‘kid’ is very effective in the anonymous, streetwise toughness of its demotic register, as well as for the way that its spare monosyllable elicits a delicate, street urchin–like beauty. In the sudden shift from the smooth-limbed vowel of ‘youth’ to the flesh and blood consonants of ‘kid’, it’s as if we had passed from the ephebes of Callimachus and Meleager to the blacksmith’s poor apprentice, as easily as turning a seedy corner in Alexandria. But ‘beauteous’ is problematic – it feels more like pastiche, cut from Wordsworth’s great sonnet on the grandeur of evening and pasted into Cavafy’s poem about dark Alexandrian alleys and constricted lives. The shift in diction has not been forced to the surface by the magma of prosodic (or erotic) necessity, but has been lowered in from above, like a prop for a Greek drama, designed to meet the rigid requirements of the katharevousa/demotic grid.

Nevertheless, history is visible inside the Greek language like gradations of blue in deep water; the very useful division into formal and demotic is not quite enough. Cavafy’s explores Greek iambs – to such an extent that early critics dismissed him as prosaic. Nevertheless, those iambs again might not be easily revealed in the English text. At times, translators catch those perfectly, as in Mendelsohn’s version of the short poem “Voices,”:

Imagined voices, and beloved, too,
of those who died, or of those who are
lost unto us like the dead.

Sometimes in our dreams they speak to us;
sometimes in its thought the mind will hear them.

And with their sound for a moment there return
sounds from the first poetry of our life–
like music, in the night, far off, that fades away.

Elsewhere, though, the lines seem to limp and trip due to the translator’s sticking too close to Cavafy’s syntax. Here, for example, is the last stanza of ‘Sculptor From Tyana’, again as translated by Mendelsohn :

But this work here is my favorite of all,
which I made with the greatest care and deep feeling:
him, one warm day in summer
when my thoughts were ascending to ideal things,
him I stood dreaming here, the young Hermes.

The natural stress of the words (‘favorite of all’, ‘deep feeling’, ‘young Hermes’) pushes against the meter in a way that contributes nothing to the sense; Cavafy’s metrical variations are precisely placed, reflecting the sculptor’s slightly nervous efforts to impress the visitors he is showing around his studio. In Greek it is common to begin a sentence with an accusative pronoun (‘him’) for emphasis, and ‘dream’ is often used as a transitive verb; in English both feel awkward and undermine the suggestion at the poem’s close that the sculptor’s feelings soar before the image of his desire. As an inflected language, Greek has a very variable and expressive word order, which means quite differently from word order in English; to reproduce it literally only flattens the English verse and makes the poem seem construed rather than reimagined. Cavafy’s delicately delineated characters – confections of tone and nuance, allusion and elision – do not always survive their journey into a foreign tongue.

Cavafy wrote about seventy poems a year, but ripped most of them up. Some he put in a drawer and worked at for as long as fifteen years. He never published a word, but distributed individual sheets among a circle of trusted friends. Always he revised and polished, never calling a poem finished, not even the ones he had printed. He lived above a brothel in the Rue Lepsius – about which he said, ‘Where could I live better? Below, the brothel caters for the flesh. And there is the church which forgives sin. And there is the hospital where we die’. On his 70th birthday in 1933 he wrote a full stop and drew a circle around it. That afternoon he was buried, yet his work remains timeless, since its thematic and linguistic interplays with history attach to his explorations a gravity of a higher order, detached from the ephemeral, entrenched in what has survived from the infallible judge that time is.[/et_pb_text][/et_pb_column]
[/et_pb_row]
[/et_pb_section]