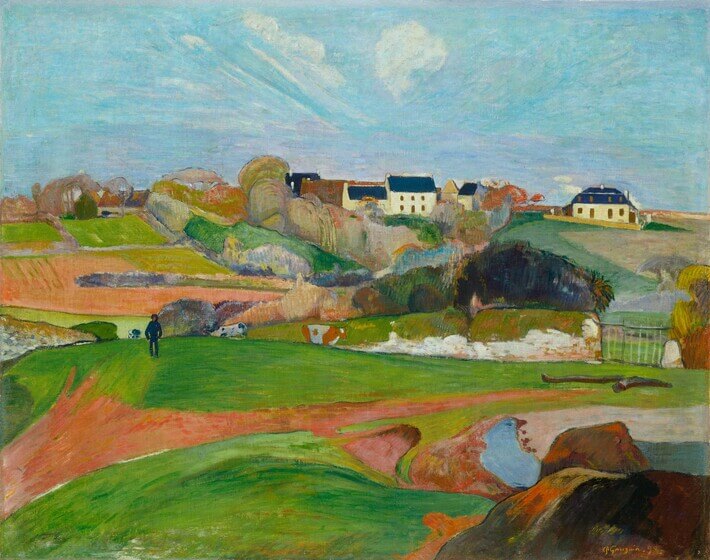 The online recipe calls for vanilla extract but no egg yolks, and substitutes half the (cold) milk for double cream, which (in my opinion) results in a thin flavour and tacky texture. Italian gelato alla vaniglia now – my grandmother’s recipe at least – is more involved, demanding not only the whipping of egg yolks with sugar, but also the infusion of scalded whole milk (no cream) with a vanilla pod and lemon peel. The result is light and smooth, with a nuanced uplifting flavour that never fails to comfort. Both recipes could be termed vanilla ice cream but the first is but a poor translation of the real thing, I think, as the pretty primrose mixture glops into the automated ice cream churn on the kitchen counter. My finger pauses on the compressor switch while I rummage in my mind for what my grandparents called the churn in their shop. It’s unsettling that the word isn’t where I left it, a feeling recalled second hand.

When I was five or so, I asked my Nono what that machine was: ‘Cos’é?’ I remember we were in the prep-room at the back of the ice cream shop grandly named El Salon Italiano, opened some thirty years earlier, in the summer of 1939, in the Spanish port town of Cádiz, to where the failing Italian economy had caused him and his wife to emigrate from the mountains of northern Italy. Nono, baptised Arturo, had also been troubled by Mussolini’s conscription of theyoung and able-bodied unemployed to fight the unpopular Imperialist war in Abyssinia. Nona, baptised Iole, agreed that her red-headed blue-eyed husband wouldn’t fare well in the desert. Besides, she wanted more from her life than tending animals, fields, and children while she waited for him to return from whatever construction job he’d managed to secure for the season. Anyway, I the childasked Nono what the ice cream machine was called, and his face went blank. Then he smashed his fist onto the counter so hard that the bowl jumped into the air and did a spectacular flip before crashing onto the floor, primrose mixture everywhere and a lovely aroma, heady sweet.

I remember how Nono’s mouth sagged, the bewilderment in his features as he cleaned up. ‘It’s azancola,’ Nona reminded him, pronouncing it with the soft z of the Zoldan dialect, a z like th in feather, tongue curling around caramel. The Italian zangola uses a hard z, as in pizza, and awhisper of a g, which gives it quite a different sound compared to the word in dialect although it means exactly the same thing, in the same context. Zancolais a very specific word, a noun referring to a vessel used to make ice cream or butter, unlike the English word churn that can be a noun or a verb and used in relation to angry blood and murky bodies of water as well as those hard steel milk containers. Churn in Spanish is mantequera (from the sanskrit manthaca meaning to mix cream), nothing like zancola, so perhaps it was to be expected that Nono didn’t connect the two. But it wasn’t his last upset atl osing the words that raised him, as his memory failed and new words encroached, hissing scratchy words that his tongue couldn't or wouldn't form. While fiercely resisting being swallowed up by his host country, he worked hard tomaintain what he perceived as himself, and in the ice cream shop Salon he createda domain where his laws alone applied. He remained Zoldan forever, but Nona was happy to blur the edges.

Although Nono named the ice cream shop El Salon Italiano, by all accounts it was Nona Iole who was the visionary for their ice cream-making enterprise. She’d had some experience: as a young woman she’d lent a hand in the gelaterie of various relatives in Vienna,Budapest, and Madrid. After she and Arturo married in 1935, and his construction jobs dried up in the declining Italian economy, they worked the summer together in her brother’s shop in Spain. When Arturo realized the impressive financial returns of this unprepossessing activity, he applied for permission to trade – women had little legal standing at the time. He would have obtained the licence had the suddenly escalating Spanish Civil War not forced him and Iole to flee back to Italy. It was a few years later, in early 1939, after that war ended and a much greater one was simmering, that a letter arrived for them in Zoldo, signed by the new Spanish Minister of Trade, encouraging them to return to Spain. It was a form letter sent across Europe to thousands of business people who had fled the Spanish conflict, but one that Iole had viewed as a personal request. Arturo blessed the timing: making gelatoin Spain for a few warm seasons would raise enough funds for him to start hiso wn construction business at home. That was his dream. He and Iole migrated from Zoldo to Madrid, collected their licence and, after learning the town had no other gelateria, decided to open shop in Cádiz. Thinking only of working hard, they brought with them a few clothes and photographs in one suitcase, together with string bags of food containing wedges of parmigiano, sacklets of polenta flour, and bottles of grappa to alleviate Arturo’s homesickness. Decades later, they’d talk of their life in terms of before and after the war, but in truth it was defined by the time before the move to Cádizand after it.

I relate to that, with my move to America twenty years ago – La Merica Nono called the mythical land in his mind. My move was intended to be a six-month development assignment with my multinational employer, and how easily I jumped the puddle, or saltà al fos as Nono Arturo would have said. Nona Iole outright refused to do so when her husband was approached to build a new city in Venezuela. She did not want to pack her valisa again, valigiain Italian. Of people with few means she’d say their suitcase was made of carton– cardboard, or worse, that they still travelled with a zarlìn, which is a very old Zoldan word for a conical wicker basket that is worn like a rucksack. It’s not the most comfortable of luggage but it is economical, sturdy,and quite capacious. One summer in my teens my brothers and I found one in the attic of my Noni’s old house in Zoldo, and we stuffed it with food, three sleeping bags, and a guitar, and hiked up the trail to the spartan mountain huton Col Marsanch. Although we took it in turns to carry the thing, we all suffered raw shoulders and backs from the rubbing. It’s not surprising that Zoldani no longer use these baskets, except perhaps as decorative features on the outside of their barns – a nod to their agricultural past. Many Zoldani make gelato now for a living, quite a good one, though for some it means leaving home for the warm months to open shop in somewhere like Frankfurt or Vienna, Rimini or Córdoba. For some, it has meant leaving home forever to makea new home and new life elsewhere. I know all about that.

When the music stops: Beethoven’s 4th and the spirit of Romanticism