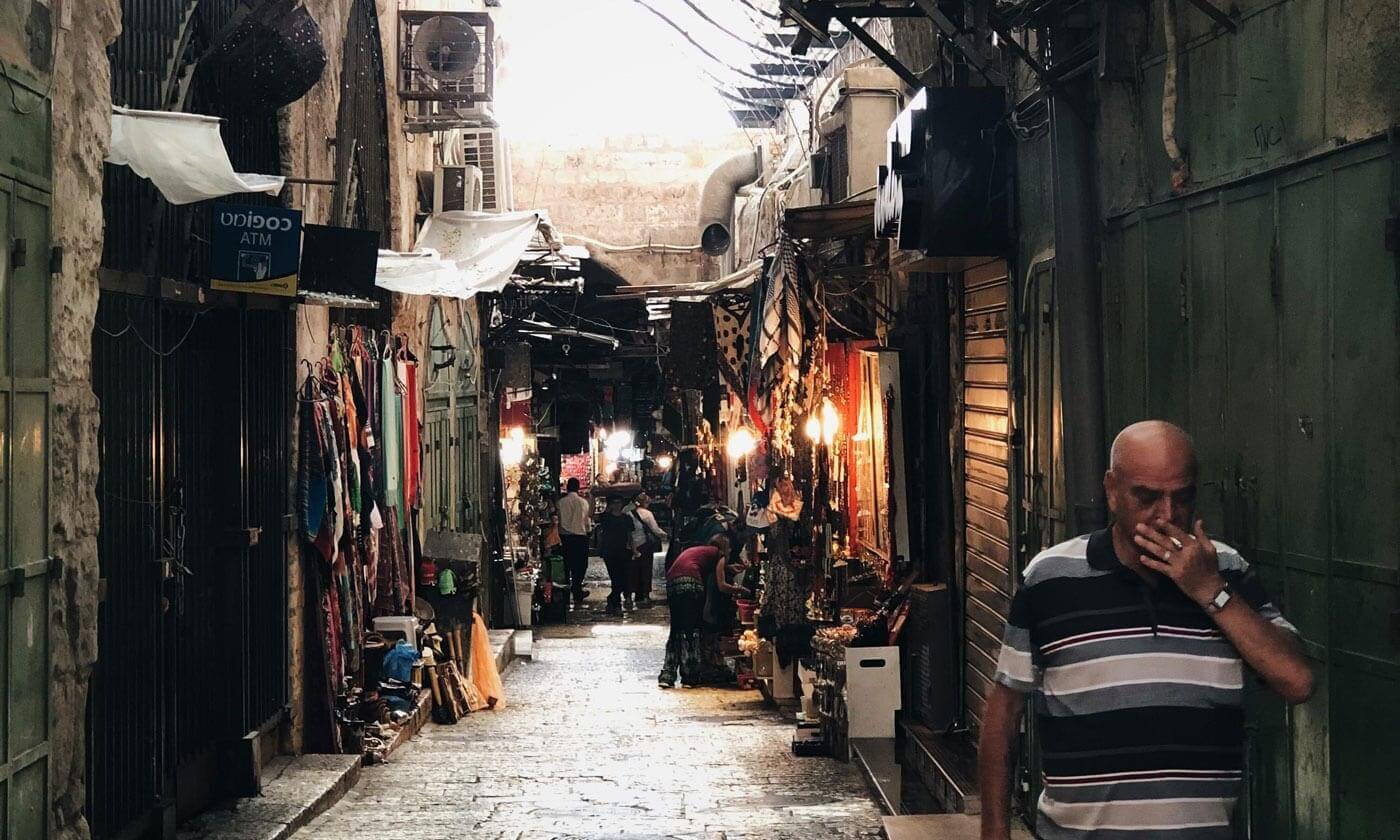 (The writer has spent a month living in occupied Palestine. With writers, activists, ex-fighters, shop-keepers, students. He can only try to do justice to their stories.)

There are things they do not tell you about occupied Palestine.

You see, there are two types of cities. The first is built to be seen, to be gazed at. To have its curved vernaculars adored and to have the words “hundred years” roll off the tongues of elegantly-practiced private guides. The sound of clicking cameras and the smooth sashay into the invisible footpaths crafted by the Administration to smoothen the flow of visitors to the next nearest old relic. These are communities that have been built to be observed. Slick commodity shops with buzzwords like “handmade” and “fair trade” are the barter songs of these cities.

The second is distinct. You walk inside and all notions of stability as a person from another culture are vanquished. The lines are blurred. Safe you a visitor, or a witness? These cities, or I would say, these communities - were not built to be seen. They were built to be lived. I used to think there was some fancy word for “lived”. But there isn’t. You can only feel it in your bones. It is as if all of your five senses are aware that you are suddenly a stranger in a community that does not care for the necessity of your existence in order to survive. And it is not a hostility. But rather, an anonymity you receive. Being ethnically Chinese, I don’t exactly blend in physically. But is not a physical dissonance. It is of emotional and spiritual sort.

You become a witness instead. Occupied Palestine falls into the second category. As if you are witnessing something that must be shared urgently. Not a cathedral or a park you saw ... but a vivid elucidation of the human experience that you are desperate to share. The first thing you notice is the Wall. I have spent many days meditating at the Berlin Wall, so I have tasted what the physical distortion of division feels like with my fingers. But nothing prepares you for the dividing wall between Israel and Palestine. Old churches in the baroque and gothic style were meant to strike fear, architects muse, historians ruminate. But this Wall does not remind you of a higher power or some sort of desert salvation. It is a 3 storey Wall with a distinct gray - uncut at some places, as if people have tried to bring it down and have failed. Vast swathes of the concrete are blackened from Molotov cocktails. Then there are the guard towers - looming post-soviet monsters with small slits in the reinforced steel. You cannot see the interior. The little boy on the bus next to me whispers in broken English. But I understand.

I write about three stories. A little boy, a beautiful actress, a brilliant student.

Every story begins on a decrepit bus. We are on a bumpy yellow bus rolling down a vast judean hillside. Behind, Israel. Before, Palestine. The sun bakes the homes outside a golden-brown. You can see the heat rising from every living and unloving surface from the windows.

Cut to my seat. A little palestinian boy sits across me. He’s probably never seen one of my races in real life. His eyes are a deep blue, a darkened depth. He’s seen a lot. Probably seven or eight years old. He stares and I stare back. A smile breaks out upon his lips. I beckon him to join me on the seat next to me.

“What’s your name?” I ask, slowly, aware that I cannot assume my lingua franca here is a given.

He pauses, as if contemplating the weight of meaning behind his birthright. “Issa.”

He continues. “you play ... guitar?” with his hands he makes strumming motions, and gestures to the travel guitar lodged between my lap. It was given to me a day earlier by a fellow wide-eyes traveller, who beseeched me that all things were gifts from God and that we had no property that was truly ours.

I laughed. and whipped out my brown instrument. handing it to him.

I balled his fingers into the shape of a pick and gently guided his hands down the six strings. The guitar echoed in active response.

Another time. His eyes didn’t open up like the movies. They never do. Eyes merely don’t blink for a longer few seconds. The movies aren’t so true. Nobody really opens their eyes. They were just fixated on his hands - at the amazement of creating something new and precious. Music. I guided his hands to some chords, and he was a quick learner. Muted chords began to sing out of the depth of my little guitar as we sat in the back row, separated by the aisle between humans, creating something special.

And in that moment, I began to sing. Anew song. and every head in that long and dusty bus turned. An Asian boy and a Palestinian boy locked in a harmony of a new song. His hands vigorously strumming chords that didn’t exist, my throat coming up with lyrics that were never sung before.

We are all musicians looking for our instruments. Sometimes we find them in other people. Often, we find them on bus rides into the occupied territories. My harmonica is brought out of my bag and I begin to harmonize with his rigid playing.

Then the wall comes. He quickly hands back the guitar and gives me a hug.

And then he runs out of the bus as it stops, with a life-death urgency, into a checkpoint with a yawning queue that stretches into the desert. Hebrew is spoken there.

And I am left holding a guitar with no player, a song that was not completed.

My colour, my passport? Those are the only things leaving me on that empty bus. Phones are packed up, belongings are gathered. And I chug into Palestine by myself.

We sit on a rooftop somewhere in Ramallah, Palestine. It is the capital of this nation. From where we sit, dusk blurs blue and red in the horizon in far hills ... We have a commanding view of these judean hills from the cushions we sit on.

I am seated across from Alyssa. From the theatres of Berlin, she sits cross legged across from me, with a beer in hand. Her soft features are masked in the muted glow of the sunset - pale skin, an actresses’ complexion, and a warm smile. One of those smiles you rarely see, that make you feel known, that you remember.

That day we had gone together to see a play put on by Palestinian youth. Young people. Barely my age. Alyssa had coached these kids for two months. Teaching them confidence. How to use every inch of the stage as a dominance to speak into the hearts of the audience. It was a play about the expulsion of Palestinians in the 1948 war. I did not understand a word. It was all in Arabic. But communication is not through words, it is through our bodies. And so I observed - the sweat on the pilgrim’s brow, the screams of those left behind, the Palestinian girl’s sobbing. And I tried to understand the struggle through their eyes.

We were ruminating about the things we had seen at this play when I paused.

“The crazy thing about modern society. If I were to ask you if you were an actress, you’d say box a dancer, you’d say no too. Or a singer. You’d think Iwas asking if you were in it as a career. But they’re not. They’re essential parts of our need to be vividly human. The lightness of being in the way we express our loves and hates. But we’re actually all actors, and singers and dancers. Our ancestors danced around fires ten thousand years ago, and songs were sung at dinners and dusk and dusty dawns even if you were terrible at it. These words aren’t a classification of skill - they’re a description of our humanity.”

We looked at the stars.

She asked me to come up with a song for the brightest in the sky. A northern star, slightly shaded by clouds.

And I began to sing.

I’d like to believe our song wafted across Palestine to make people look up and believe in hope. But more likely, it was drowned out by the club music opposite. That’s ok. Heaven hears you trying to put beauty into words. To allow nature to redefine ourselves so that we can help people to redefine themselves.

His name is Anas. Omar. Abdullah. He’s my age. A university student at Birzeit, the biggest and most prestigious in Palestine. We’re sitting in a café somewhere in Ramallah, as he puffs gently on a shisha stick.

We chat about climbing mountains, finding relationships, entrepreneurial ideas and the best food in the world.

He shows me a video of Israeli soldiers kidnapping his university’s student union president.

Are we all actors in a stage play in the desert?