Hidden in the thread
|
Theoni Androulidaki 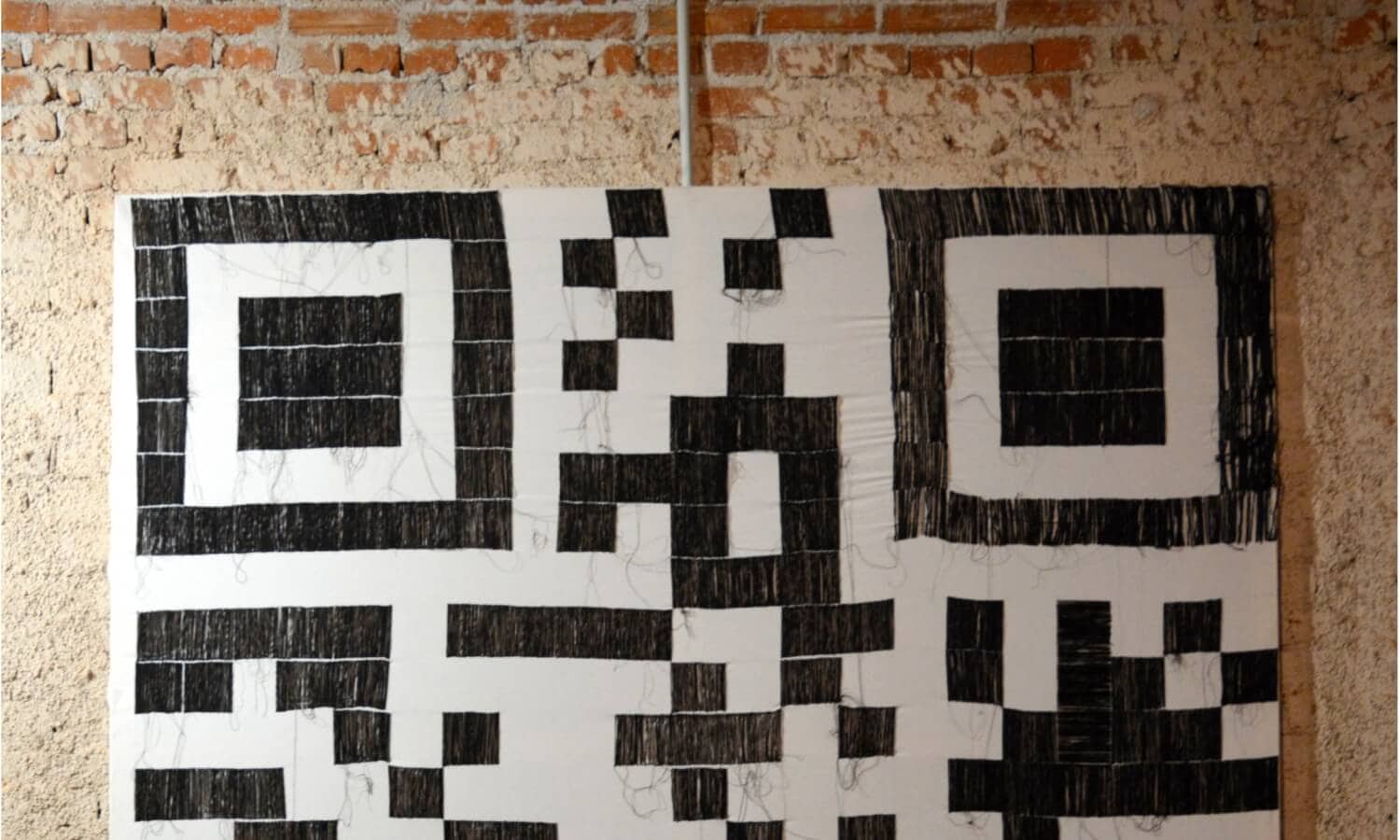 By definition, a code is hidden, and so is the ‘self’. If you scan the ‘code’, the ‘self’ is revealed, or else, you have to scan the ‘work’ in order for the ‘self’ to be revealed. I see the function of the needle - the tool I used to apply the thread - quite contradictive; it can either heal and form, or hurt. Symbolically, external and internal factors can heal us or hurt us, and this is what forms our ego.

A conversation between the artist and a viewer of the piece of art:

Vasiliki: This time you have created a very different, albeit very intriguing piece. You have taken a concept with which all of us are familiar, and had turned it into a piece of art. Why would you say that differentiates the two? Or to extrapolate to another example, what differentiates Warhol’s soup cans from the soup cans we find on the shelves? Why would we intuitively define the first as art and the latter as not?

Theoni: For me, art is not just the piece itself, but also the discussion that accompanies it and which is sparked by it. Similar to Warhol’s concept who depicts repetitive Campell’s Soup cans, the image of my piece is something that one encounters everyday in almost all commercial products purchased and used. A QR code is a unique symbol for every product, so that people can scan it in order to be led to its identity - its website, an image, a text.

Most of my ideas come from combining external stimuli, and specifically the purpose of them, with inner thoughts and agonies. I would name it as a continuous process of seeing things from a different point of view, one that it is affected by externalities and inner needs of expression. Like Warhol’s soup cans which were much discussed due to the appropriation of a commonplace object, the concept of my piece was thought to trigger a similar discourse, omnipresent in the pop and contemporary art era, proving that today’s art also includes philosophy or theory of art.

A common object becomes a symbol, or a work for interpretation, to be understood either personally or universally.

V: You know, at first, only mimesis, or imitation was art - people would represent what they could see around them. Just that. Gradually, we have entered a new paradigm. Arthur Danto wrote about this phenomenon, naming it the ‘death of art’. Danto is not claiming that no-one is making art anymore; nor is he claiming that no good art is being made anymore. But he thinks that a certain history of western art has come to an end, in about the way that Hegel suggested it would. The ‘end of art’ refers to the beginning of our modern era of art in which art no longer adheres to the constraints of imitationtheorybut serves a new purpose. There are no stylistic or philosophical constraints - art aims to serve itself. Do you think that pieces, which do not have this self-referential nature primarily, but other purposes, such as ideological or political, still deserve to be called ‘art’ and if yes, are they of lower quality? Take for instance the work of the movement of socialist realism, whose primary purpose was to produce a glorified depiction of communist values, such as the emancipation of the proletariat. Do you see art or propaganda in it? Or a little bit of both? Can they coexist?

T: By theory, works of art are themselves part of a social environment from which political movements inevitably emerge. They communicate ideas about leadership, authority, desires and threats, which illustrate the past, express the present and suggest the future. Art and the political context in which it is performed construct and renovate beliefs about the social world by determining problems and solutions, whilst offering interpretations of facts or give different perceptions of them. In the context of an international financial crisis artworks can become a compulsory foundation for shared political sentiment. Documenta14, for instance, one of the most renowned and debated contemporary exhibitions worldwide, had strong political and social foundation. In the context of Documenta14 and the economic and political crisis Europe is facing, my expectations of seeing powerful, political artworks were strong, and indeed many artworks exhibited moved the general public, and required its involvement. Yes there is a line between serving art with a political context, and serve the political context using art. But then again, little does it matter, to find the exact definition of art, I believe.

V: After all, the phenomena of art are, by their nature, too diverse to admit of the unification that a satisfactory definition strives for, or that a definition of art, were there to be such a thing, would exert a stifling influence on artistic creativity.

But just for the sake of the discussion, a painter who is paid by the Soviet regime to draw the father of the nation, surrounded by the happy faces of young proletariats, does not convey anything to me - it is a hollow stimulus. Intuitively, I would not name it art, because it has only one surface, nothing to explore, nothing to discover. Everything is given to you, and nothing is left to the imagination.

On the other hand, if an artist wants to politicise his art, he could potentially create something interesting. What’s the difference you will ask? Firstly, there is a definitional difference in politicising and in doing propaganda. But even if there was not, the fact that he is not paid by the regime to do propaganda does not mean that he is not doing propaganda - and if the end product is in both cases, propaganda, then what’s the difference? Well, I believe it does make a difference the fact that in the first scenario, you are constrained and obliged by someone, whereas in the latter, propaganda is your free choice (ridiculous as it might sound). Because in this second scenario, there is a human dimension to explore for the viewer, you can wonder why. But in the first scenario, there is no depth whatsoever - it is a well-instrumented policy by a faceless authority. Probably, neither the personal not the collective propaganda would end up being very interesting pieces of art, but if I had to put them in a scale of a priori artistic value, I would posit the first higher than the latter.

Anyway, the other thing that came to mind when looking at your work, was how fast I immediately recognised that it depicted a QR code, an image which let’s say 10 years ago, no one would recognise. How are technology and the fast-paced rhythm of today’s world intertwined with your work?

T: Technology allowed me to make my piece interactive to the audience. It eased my intention to make the audience involved, and indeed most of them felt surprised when they realised that the QR code actually works. Months of making the work concluded in just two seconds scanning it and make sense of it.

V: When you zoom in, you have the impression that you look at a different piece, since you can only see the white and black tiles. The perspective you gain is very different than the one you receive when you look at the entity of your work.

T: When you zoom in, the white and black tiles do not make sense, but when one sees the whole picture, the QR code is apparent - the code is completed - and can be scanned. Similarly, reactions and single behavior cannot be representative of one self, a number of them are needed for one’s character and personality to be revealed. Indeed, the perspective of the microcosm is much different from the macrocosm of oneself.

I'm a Management student at the University of Bath, with a lively engagement in the field of the Arts, and especially that of visual arts.