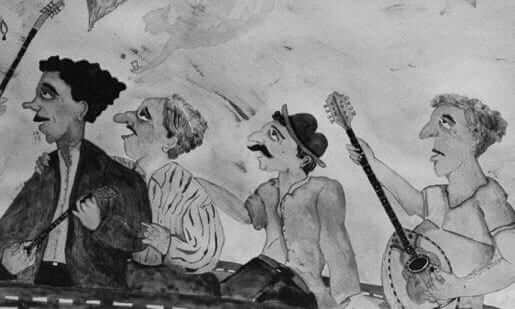 In the Greek port of Piraeus, during the interwar years, amber worry beads kept the fingers preoccupied, carnations instead of lapel badges. Men, and a few women would lead lives on the fringes of society, with no will to comply with the commonly accepted habits and values. Amidst the underlit streets, in the smoky underground taverns, the desire for eternity and the necessity of temporality for those people became externalised. The music of rebetiko was born.

That port became the setting of a peculiar amalgamation, where the locals would blend traditional Greek elements with the melodic lines of Minor Asia and few European rhythmic influences. Modal structures completed tonal ones, performed on tempered instruments, on the bouzouki, the baglama. Boisterous audiences added their own percussion, using anything handy – spoons, glasses, their own feet. The accompanying voices, rough and reserved.

The main rhythm would be that of a slow and heavy 9/8. One single man would dance, whose vivid imagination and desire to improvise would transmute each note to a movement of his body. The players of the music, the singers, the dancers – they all refused unnecessary ornaments and emotional outbursts. There was only life, stark naked and unembellished. An endless sostenuto, whose dramatic force stemmed from that complete lack of passion.

There was nothing loud to provoke the attention – one would listen to them, if sharing the same tranquility. This is why, every time I find myself in discussions about the music of Greece, with interlocutors, who do not speak Greek and/or are not from Greece, I feel that any effort to translate the lyrics of rebetika is doomed. We always end up just listening to those songs and each of us gets what he wants from them. But it’s always intriguing to try.

A first attempt to approach the songs would be the literal translation: find words that paint the image of the original song in an exact way. For instance, let’s consider the opening lyrics of a song by Markos Vamvakaris:

All the rebetiko singers of the world
they like me
once they look at me
they will become a sacrifice.

The literal translation of Greek words, when transcribed to another language, sounds awkward, unintelligible or even farcical. It assumes that the foreign reader will want to engage with the song from the position of an observer with curiosity to make sociological deductions about the genre. As a result, the flow is replaced by a cumbersome reading, which deliberately alienates the reader in order to provide him with words that are more loyal to the original for this technical appreciation of the music.

This cumbersomeness could be avoided, if one attempted to find words that would not be synonymous, but would convey an equivalent sentiment (rather than wording) to the Anglophone audience:

All those than sing rebetiko
they like me,
they look at me
and will do anything.

This second translation reads more naturally and the aura of a man, who has the nonchalant, uncompromised character is conveyed in a firmer manner. Nevertheless, it’s still dry. The word ‘rebetiko’ sounds out of place, the Greek idiom ‘become a sacrifice’ is lost in the altar of this flow. It feels as if I no longer read the lyrics of a rebetiko but of an entirely different song, which could have emerged from any language, from any circumstances.

In the first attempt, the song seems awkwardly Greek, in the second not Greek enough. Isn’t this imbalance a common problem in translations? Each language has an aurality, words that are dissonant, words that are harmonious, words that could replace emotions themselves, words that speak plainly yet fittingly without clouding the outline or blurring the depths. These words are different in each language and the translator needs to make this transition. Shall it entail exactitude? Then, meaning is sacrificed. Shall it safeguard meaning? Then, detail is lost. These are neither absolute nor (always) mutually exclusive, but in both cases, something is surrendered. Something is to be gained, too.

This coexistence of loss and gain is what makes a text translatable for me. Maybe this personal classification of something as translatable does not hold much value, since I have never been able to perceive something as untranslatable, vis-à-vis as something which showcases only loss or only gain. The losses that I might have felt are rather easy to understand. What might surprise is that I tend to ascribe an omnipresent gain to every translation I read – that the reader becomes able to approach a text, not only by listening to it in its original language and feel it, which I by no means downplay, but also by reading its content, which I also value. This reading might be dry or alienated, but it’s plausible. A game of words one might say, but I think it is relevant in order to recognise this very fundamental in its simplicity gain, that the plausible reading, as imperfect as it can be, it’s still better than the complete inability to read - the life that the text acquires, be it imperfect, is preferable from a state of oblivion.

Nevertheless, just because a text is translatable it does not necessarily make it a good translation. For me, a good translation tries to mould the interplay between loss and gain from a mere coexistence into a balanced equilibrium, requiring a gain that exceeds the mere capacity to read the otherwise inaccessible words. I do not think that rebetika are untranslatable, but I do believe that they cannot be well translated, as their gain is restricted to this new window into the cosmos of the rebetiko and no further.

The inability of the translated rebetika to exceed an explication de texte is neither the case for all forms of Greek written word nor is it exclusive to rebetika; I have often felt it when reading translations, of every language. It only happens that I have the Greek experience as a springboard. In Greek prose, poetry, lyrics of songs, the element of Greekness is channeled in both a textual and non-textual manner. For instance, let’s look at the translation of an excerpt of ‘The Last Station’ by Giorgos Seferis:

Now that I sit idle, contemplating
few are the moons which have remained in memory:
islands the colour of a grieving Madonna, late in the waning,
or moonlight over northern cities sometimes casting
on troubled streets and rivers and limbs of men,
a heavy stupor.

In those lines, the Greek sentiment is built primarily through the sequence of landscapes that carry a distinctive Greek colour, which is retained in the English translation. When textual elements dominate, the translations tend, indeed, to maintain the Greekness of the originals. The rebetika, though, employ an abundance of extra-musical significations, which in turn are linked to many extra-textual elements. They draw on the common experience, the collective memory. This means that the words of the translator will never carry the adequate force, as the reader would not be able to process them adequately, unless access to and internalisation of these connotations were established. Therefore, this Greekness in the rebetika, unlike the poem, was never really there, in the text, and as such, it could not really become part of this transition. After all, the translator does not have the power to instill those connotations in the souls of the readers.

And to be fair, it is not only the translations of rebetika that feel drained. The voyeurism of analyzing and decoding them feels draining, too. The more we are talking about rebetika, the more we are losing sight of them. They are slipping between the cracks of our texts, getting lost in their margins, where they belonged in the first place.