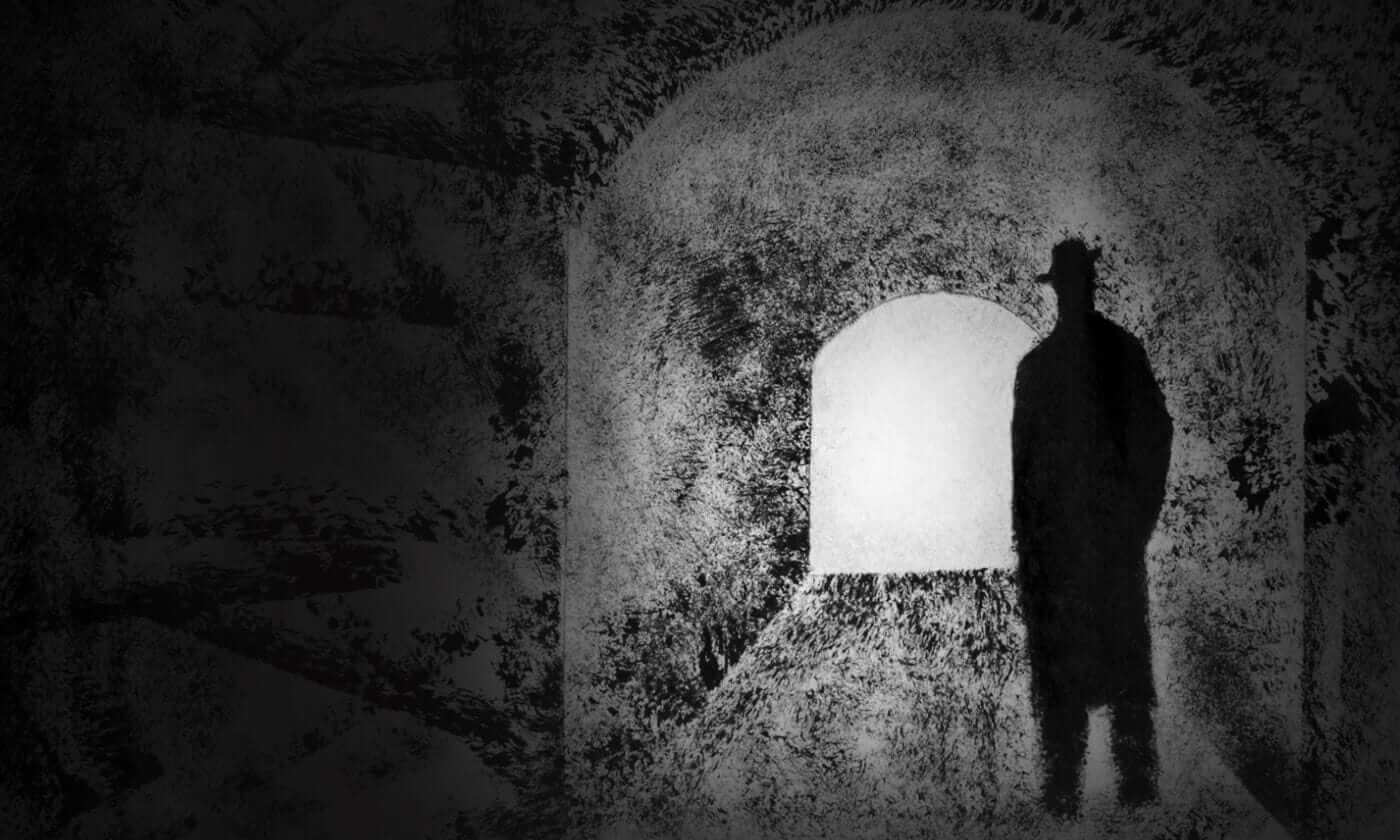 Jan Nielsen was lying in the bathtub, his eyes, tightly shut. It had been over a year since he had submitted something for publication, the past months riddled with sub-par drafts and manuscripts, whose unfortunate fates were apparent from the very first line. It had been over a year, when, having finally cast off the last of his ties to the realm of humanity, the words, for which he had sacrificed so much, decided to abandon him.

Try as he might, all he wrote was mere transcriptions of thought on paper, lines of dark graphite whose meaning was charged only by conventional usage. He could no longer feel the language, see the connections, those ephemeral golden webs, leading you from one word to the next; phrases, with the power to procure worlds to which only the reader was privy.

Jan thought of himself as a craftsman, or, even better, a labourer, poised at the ready to copy the notes played by the muse - from flute, to writing. It was this ability, allowing one to decipher the scores, that Jan had lost. He could still hear the music, a soft din, at the back of his mind, but the notes themselves, were no longer recognisable; the sounds, no longer distinct.

All he could try to do was survey; filling in the blanks in his hearing with his own imagination. With each word he wrote, followed a barely audible ‘snip’; the cutting of a thread, until, by the time the story was over, the intricate web, which he had, with such pains been trying to draw, was barely visible. Disjoint lines, fluttering in the slightest of breezes.

This led to periods of complete abstinence and renunciation, where the mere sight of a pencil would cause him to blanch; only to be closely followed by excessive overexertion, forcing himself to toil over endless sheets of paper, until the tips of his fingers blistered and bled, tainting words which had no life to begin with.

It had reached the stage where he could barely face his desk; the dark mahogany beckoning with foreboding. When finally mustering the courage to sit and write, he couldn’t help but notice the dark shadows, cast on the wall. A figure bent over the table, pencil clutched in hand. The remnant of his past self. The reminder, that he too, had once been one of the select few blessed with hearing, spending hours on end facing the very same wall, sitting in front of the very same desk, bent over his paper, writing with a fervour that was long gone. And at the end of each day, with aching hands he would read over his work, as foreign to him as to anyone else. The moon dimly shining through his window, where in its place, in what he could have sworn were mere moments ago, had been the sun.

The change hadn’t been a gradual process; neither was it a radical transition, from the old Jan to the current Jan. They were, quite simply, two different people, one of whom could write, while the other spent his time lying in a lukewarm bath, staring at the ceiling and trying to summon up the willpower to get back to work.

Jan arched his back in pain, the convulsions causing the tub to overflow. In a few seconds it was over, and he slowly drifted back in the same position, clutching his forehead with both hands.

He wouldn’t be calling Tomas, his editor, to beg for an extension. Nor Eszter, Tomas’ boss, who had taken pity on him multiple times in the past. Two weeks were more than enough.

He had told no one. The truth is, he had no one to tell. With no family to speak off, and few, if any, business associates other than Tomas and Eszter, Jan was alone in the world, with only his writing to keep him company. A pile of Faber Castell HB2 pencils waiting, sharpened, in the topmost drawer of his desk, alongside a tower of lined legal pads.

Stocked with meticulous loyalty, these had once been his guarantors - talismans, assuring him of the efficacy of his projects; promising to complete them in his stead. But, alongside the words they created, they too, had now turned against him. Mocking him. Pointing out the stark differences between the man he used to be, and the one he had become. The man who desperately clung onto the dreams and ideals of another, by means of his pencils.

By now, aged forty-four, Jan felt that he had more or less fulfilled all he had set out to achieve, all those years ago. ‘I wish to write a book that shapes me,’ he remembered saying, ‘I wish to write it for myself, and read it, feeling the fruit of my efforts take seed within, to be writer and reader, simultaneously.’ Coming from a conservative background, and studying history as an undergraduate, he felt that no one would take him seriously, but, with the insistent prodding of an elderly professor, Jan had dropped his doctorate, focusing all his energy on what his peers felt was the naive whim of one scared to take the plunge into academia.

Naive or not, the whim had paid off, for he had indeed written not one, but multiple works that touched him, among them prose, verse, and even a short play, published under the pen-name ‘Niel Jansen’. He sometimes felt that it would be unfair to ask more of life; after all, no one has a right to the eternal favour of the fates. At times like these, his current incapacity would not bother him much, treating himself as an empty husk - his life, void of any significance, having been drained into his writing, which could now fare well on its own.

Whether these feelings were genuine, or merely a defense mechanism to protect him from the existential qualms of a dying man, Jan did not know, and, to be frank, did not care much to find out. ‘Better remain in this state of ignorance,’ he had decided, ‘lest I delve too deep and discover that there was much more I could have achieved, had I the time.’

Lowering his hands with a groan, Jan climbed out onto the soaked bathmat, wrapping himself in a robe. He rarely bothered to wear clothes these days, finding it much more convenient to remain in his towels indefinitely, until, that is, his next bath. In fact, the only time he would venture out of his apartment, other than the occasional visit to the office, was to receive the weekly groceries from the delivery boy, and even then, it was only one flight of stairs down to the landing. Such was the life of a bachelor.

Walking into his study, Jan felt another pain in his temple, causing him to keel over and grab onto the desk for support.

Reopening his eyes Jan straightened up, tightening the knot on his robe.

The doctors had told him to keep count of every attack, although Jan suspected that it was merely to instill a sense of purpose in moments of turmoil; to stop patients from panicking when the pain became too strong. After all, the mild analgesic they had administered was nothing more than a numbing agent, to relieve him in the time he had left.

He stroked the top of the desk with the palm of his hand, the wood smooth against his fingers. This desk had carried all his life’s work, from start to finish. Since the experimental Bachaei in 1974, kickstarting his career as a self-sufficient author, he had not written a single page on any other surface, this being the beginning of his superstition regarding writing materials.

Nestling in his chair, he pulled out a clean sheet of paper.

‘Lort!’ he gasped, through gritted teeth. The situation was deteriorating.

Jan stared at the paper, forcing himself, with every ounce of strength he had left, to pick up his pencil. Thirty minutes and three attacks later, the sheet in front of him was still blank.

A drop of sweat, inching its way down his cheek, Jan began to write.

‘An author never has a final story. All they can lay claim to is the second-last story. For, coax it all you can, an author’s final story will remain a blank sheet, possessing within it, unbridled potential; dreams and ideas, one never knew he had. And merely gazing at it, basking, in the crispness of the paper, accomplishes more than anything one can create. Rather than being a mere imprint of one's current self, the blank sheet transcends time. It contains all that one could be, and all that he could not. Giving one glimpses of a future that isn't writ.’

It was upon this line that Jan lay his head on the sheet, basking in the crispness of the paper, and closed his eyes. His right hand, swaying gently by his side, still clutching the pencil.

The Death of Fellini & Other Poems