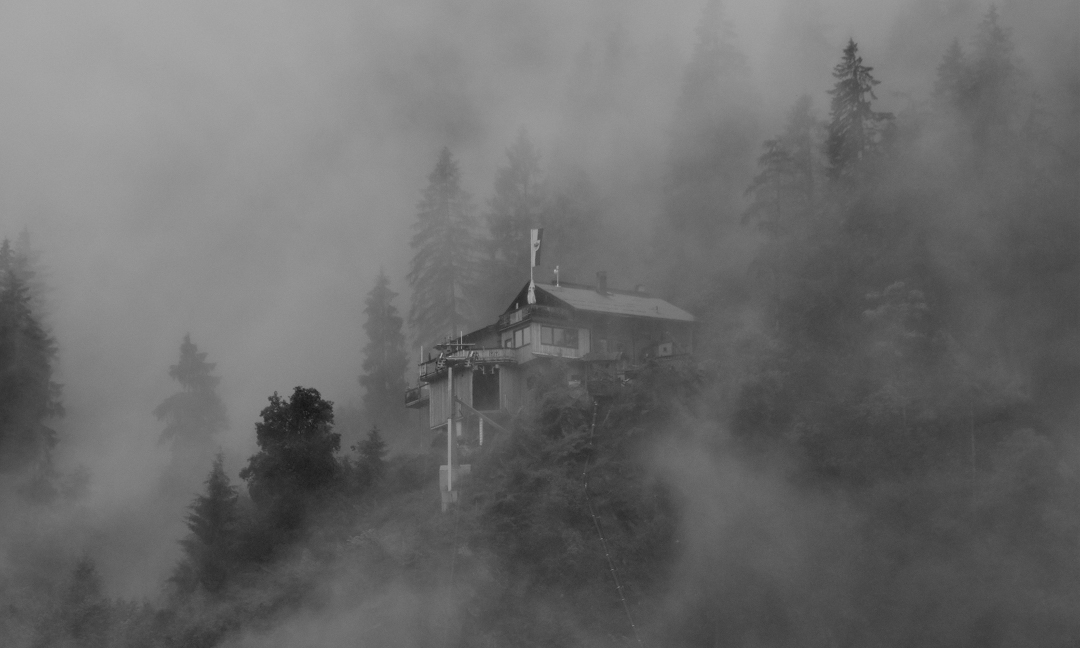 Power left these northern hills that summer’s eve when sun ceased to set and night became all encompassing day. Summertime eyes would not close for fear of flying into dreams untethered to the natural cycles of darkness and light. Myth and magic ruled over the minds of this starkly draped land. Here it was preached and believed that if one were to slip into the stories of sleep during the daylit night, the soul would freeze inside the nightmare of a parallel world of darkness. Officials and clansmen passed down the decree and every winter hence for months on end, hammers would silence, ploughs would lay idle and wash lines hung empty as families, now fattened on the harvest, would hibernate in huddles of fur atop hide seeking to find warmth and recapture months of sleep lost. Evergreens, the only life peeking out from the folds of their cold downy blanket, limbs weighed heavy under frozen clouds. Heard on the frostbitten breeze was a quiet song most cavernous. Nothing could disturb winter’s slumber.

Spring would welcome depleted forms back to daily rigor and routine, the strongest set to survive. Not even the warming cries of the young could stave off solstice, terrorized by days with no nights when any meaningful sleep was forbidden. Villagers’ eyes once lit from the inside during more temperate months, were dulled to a doll’s finish at summertime, a collection of lifeless souls pulled into positions made to look meaningful. Sobbing children of summer, soaked the streets with their tears, too weak to carry their sadness far. Their adults took turns standing watch over them and each other, never questioning the necessity to fight the exhaustive control of their bodies. Protectiveness prevented tired eyes from the deepest landscapes of sleep. Loved ones snatched awake their wives and mothers, husbands and brothers from the clutches of the hills and valleys of rhythmic breath that might ensorcell them away to that foreign land of obscurity. Generations had fed on months of unrest and those lessons taught the townsfolk to dismiss any internal alarms, never to heed calls for change. A public was sworn to their path as wayward as it may be. For how could they ever return to their loved ones if there were no light to see their way home.

Babes of summertime were swaddled and nursed lightly, never fed full. Allowed only moments to close their eyes, new-born breaths deepened, tiny muscles twitched with restful release until their mother’s pinches pierced the town with their bruises and wails. Work was as unrelenting as the listlessness that imbalanced their young limbs. Planting was methodically slow, flattened by fatigue, lumbering became a danger to any who wielded an axe without a steady gaze.

Autumn would sink the sun below the horizon and reclaim the life of the residents. Harvest overfed them in readiness for winter. Talk rarely ensued of the battle they’d just waged on themselves and their families, passively enduring the hardship of warring oneself. As mornings returned at dawn the laborious sounds of sawing and stomping, stitching and stewing, preparation and resignation settled over the town. By fall equinox, bodies hefted and minds had relearned a right to sleep. Feeding on stories of what must be for what has been, villagers awaited the coming chill.

Children born of Yule were nursed continually, lulled to sleep by the collective hum of the huddled masses. By springtime they knew little else but to eat and sleep, draining mothers of health and concern. As the sun reheated and remade the days, young ones with full bellies who had run off to play could often be found deeply asleep under trees, difficult to wake, further proving the pull of the darkness on the other side of dreams. Prayers and chants were praised and sorcery blamed.

Rituals kept hold of the townspeople, funnelling them into ceremonies and practices that encouraged the fear that lived among them. When an adult found sleep, and dreams came upon them, the stupor of being awakened buzzed the body, blurred the vision and tormented the mind. One’s own family could see dreamers of summer when awakened were not themselves. After visiting the other world and returning, demonic quality was assigned, penalty of pain promised and such infractions were publicly demonstrated.

Without the bravery to ride out to meet summer’s Sleep, that goddess and graveyard of dreams, no rest could soothe the wearied villagers. After decades of fighting within and without, eventually madness split their minds, divided families, and sickness seeped into the town. Winter’s darkness devoured poor souls one by one by the first morning of spring, when a lone young mother and her babe peeked out of their folded furs they woke to the rotting lives around them. Body broken by hunger, the young creator cradled her pale child registering the slowing beat of their hearts on their joined march toward death. In her weakness she found her only strength, a soft voice, unwavering in its aim. Singing to soothe, singing to wish her child to sleep.

Of the origins of songs (or La Lopez Pereyra)

A Tomb in the Garden

On The Arrival of Spring