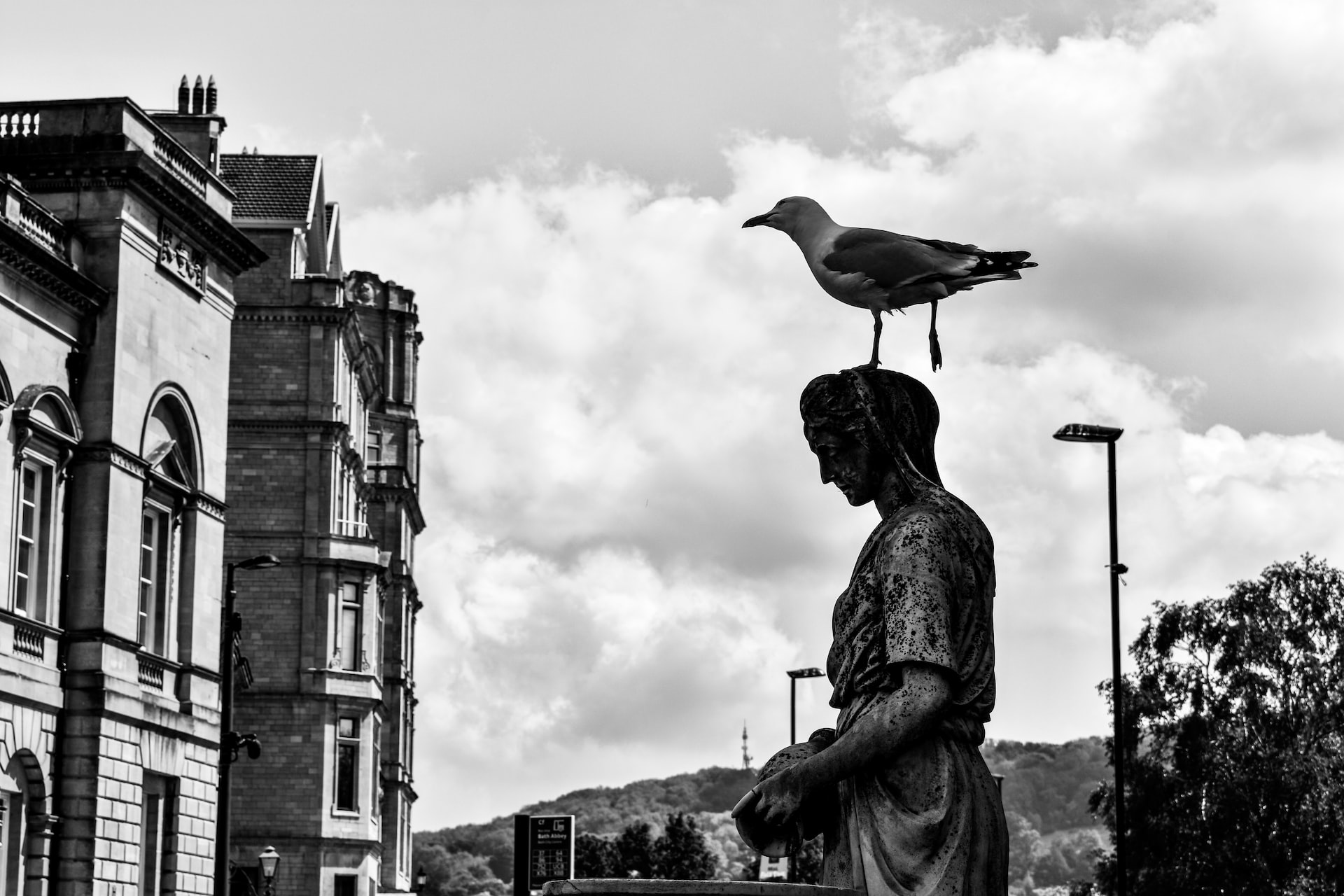 This place is only desolation:

where once were marvellous stones.

In ghostly courts the fragments

that were the work of giants

have found in Fate a feckless watchman

There is an Old English poem, The Ruin, describing a city, generally believed to be Bath, as it was in the Dark Ages. The legions had departed, and there was no civic organization in the remaining tribes to maintain the splendours of a Roman city. Rome itself was in ruins. Bath was not immune from the general European fate of the decline that lasted centuries.

It was a long time before the city of Bath, remade in a Classical style, was to become a paragon of civilized excellence that attracted wealth and fashion to parade in its elegant streets. Bath, named for its natural springs with their healing properties, has a long history, an interesting one, of which the Palladian grandeur is only a part.

It is clearly a special place. The ‘marvellous stone’ of Bath yields to the mason’s blade. Shaped, carved stone, decorated in an antique fashion, creates an ordered, assembled world. Beneath the stone is another world, just as one can walk the city’s discreet and sequestered passages, built for servants and artisans to run errands out of milady’s sight.

No-one can look favourably on the thought of servitude, but as civilization advances, new styles of architecture emerge, both in the literal sense of masonry, and in the social sense of cultivated feeling. New styles of moral architecture are implied when a city is restored. The hope was that the devastated city of the Eighth Century poem would be rebuilt, perhaps not as before, but certainly in a way indicating how life continues, and possibly how life can be better. This is a reflection of the city in history, a history of which Bath is a microcosm.

Sheridan’s The Rivals, a comedy of manners, is a sharply observed portrait of the rising gentility in the Eighteenth Century. The choice of Bath as the location is telling. A memorable character is Mrs. Malaprop whose solecisms gave a new word to the language. Her aspirations to cultivated taste were not supported by an educated sensibility.

Sheridan was not only a man of theatre, and in private life wonderfully romantic in his elopement with Elizabeth Linley (who climbed out of her window in the Royal Crescent). Sheridan was also a serious politician, a Whig in Georgiana Cavendish’s circle of radicals. Behind the drama was a powerful critique of the governing class of his time. Social pretension and hypocrisy were the targets of Sheridan’s acerbic comedy.

Grandeur demands of its denizens an appropriate style. This can be a trap for those who do not measure their way of living wisely. Grandiloquence is always a danger when achievement does not match aspiration. This is the background to Northanger Abbey, Jane Austen’s satire of social conventions. The time of Gainsborough and Sheridan had faded into Regency dandyism. Despite the popular association, Austen wrote little about Bath, caring not much for it personally, and preferring the country where there were less distractions.

An undistracted imagination was that of Mary Shelley’s whose Frankenstein, was conceived in a feverish dream, but carefully composed in the shadow of the Doric colonnades of Bath. Far from its sensationalist reputation, Frankenstein may be seen as a Romantic’s questioning of scientific optimism. Or it may be seen as a rational examination of the Promethean hubris arising from Romantic adventure.

The marvellous stones among the healing springs of Bath were celebrated by so many writers, from Smollett to Dickens, that it rivalled Edinburgh as a place of learned culture. Today one can walk those narrow passages where past lives are sequestered in the fabric of the place.

That figure in the mist may be Coleridge waiting for the mail coach to take him across the county. Or it may be an artist of our time who is about to make his mark. ‘I have seen too many ghosts to believe in them’, Coleridge once remarked.

Coleridge did not catch the mail coach home that night in December 1813. It was cold and wet. Coleridge was feverish from a chill and the effects of opium. With a bag of books and clothes (that seems to have been the order of precedence) a great poet and thinker collapsed. He could travel no further in his imagined realms. Reality was a cold, hard pavement.

But reality, like imagination, has more than one face. A paradox of Bath is that, for all the creative energy associated with the place, there is a languor in the air. And by this I mean in the physical atmosphere. Surrounded by hills the valley traps the air, creating a sultry atmosphere that is not conducive to physical exertion. If you hurry in Bath you are soon perspiring. Life has to be taken at a measured pace. A gentility of spirit is encouraged.

The contrast with London, say, is not lost on successive generations of metropolitans in search of tranquillity. In Aldous Huxley’s Antic Hay the young hero’s architect father constructs a model of Wren’s plans for London after the Great Fire. Of course it was never built. We have many churches, but not the boulevards that Wren envisaged. It would have rivalled Palladio’s Vicenza, as Bath was to do. All we have is the ideal, plans of what never was.

At first reading Huxley seems to be deviating from the narrative of hedonistic young Londoners in search of sensation. Then it becomes clear what Huxley is saying. In the architect’s attic is an unrealized and perhaps unrealizable dream. Wren’s vision of London contrasts with the ad hoc reality of life in a crowded, competitive network of ambitions and betrayals.

Within the city is another city. In the matter of the stonework is a vision of an ideal city, an ideal that occasionally may be glimpsed in the shadows of the indifferent and unforgiving Babylon.