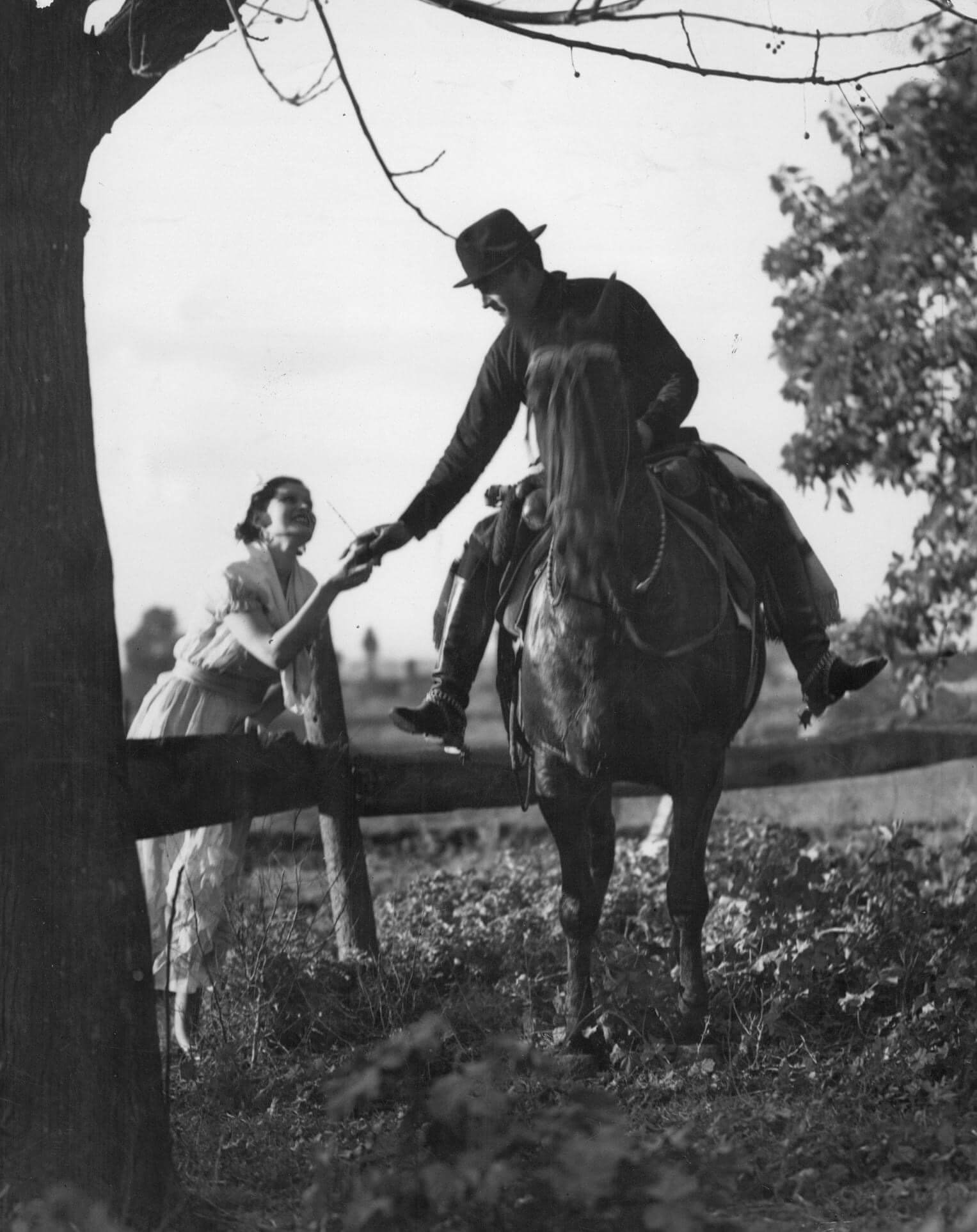 You are so forgetful! Yesterday you left behind
here, over the piano that you no longer play,
a bit of your ailing girl soul:
a book, forbidden, of tender memories.

Intimate memories. I opened it, carelessly,
And knew, smiling, your deepest woe,
The sweet secret that I will not tell:
That you mention me no one wants to know.

…Come, take the book, you faraway, full
of light and daydreams. Crazy romantic…
Leaving all your loves here, over the piano!...
You are so forgetful, absent-minded!

Evaristo Carriego, who was born in 1883 and died in 1912, was an Argentine poet that, in spite of being from Entre Rios, has come to be known as the poet of the – now popular – neighbourhood of Palermo, in Buenos Aires. His poetry, catalysed by J. L. Borges’ reading of it in his book Evaristo Carriego, is generally viewed as the melancholic memoirs of the old neighbourhood in the outskirts of Buenos Aires; as a song to the crepuscular streets that faded into the Pampas. These streets were, in this reading of Carriego’s verses, the setting for compadres, guapos, cuchilleros and other lowlifes. These ‘cultists of courage’, as Carriego calls them in the poem El Guapo, were the Homeric figures of the suburbs that ‘in the corners or in the yards’ with a dagger or a guitar sought each other and fought for the recognition of the neighbours. Victorious, these rural ‘musketeers’ would ‘later sing, congratulated, to the insolent compadraje’.

Yet, this Palermo of dirt roads, uncertain lights, fresh evenings and silent walks was also the place for secret unrequited love, warm beloved hands, smiling eyes and tender words. Maybe because he was less interested in these memories of Palermo than Carriego himself or because he really did think that Carriego’s sentimental poetry was minor, Borges failed in his commentary to see the depth and value of Carriego’s love verses. In these verses, Carriego’s realist costrumbrismo turns into the romanticism of early modernist poets, or the modernism of late romantics. In the first verses of Envios, Carriego summons ‘delicate modernist poets’ who are able to ‘praise in gold’ the ladies’ ‘aristocracy’ and ‘olympic temples’, something which he then sets out to do in Ofertorios Galantes. In this section of Misas Herejes, in which Tu Secreto is placed, Carriego takes the voice of the modernist poet and sings to the beloved, which becomes the intended recipient of most poems of this section, with the hope ‘[t]hat this verse, which you have lost, finds you, as if it was sent from memories left in a land of oblivion’. In these songs, the yards that in El Alma del Suburbio (The soul of the Suburb) were occupied by El Guapo, who sang with the guitar the victories obtained with the dagger, are now taken by the suburban muchacha. In the poem El Patio (The Yard), Carriego describes:

I like to see you like this, under the vine,
Sheltered from the midday sun,
Laughingly bold, gentle, gallant,
As an evocation of Andalucía.

‘When I hear the red violin of your laugh’, adds Carriego, ‘a warm wine – bohemian liquor – fills my brain with crazy melodies’ and as he does Palermo gets tainted by the Filtro Rojo (Red Filter) of young love. In Palermo, ‘it is raining peace’, says the poet, when ‘a guitar, far away, cries and the neighbour makes her piano laugh’. Far from the violence of the guapos, the poverty of the ‘worker’s woman, dirty and tired’, the ‘husband that will come back drunk’ and the ‘silence’ that makes the ‘soul of the suburb, rough and sombre’, Palermo is, in Ofertorios Galantes, indistinguishable from the gallant girl that walks its streets and rests in its yard.

Palermo was, probably, neither the idyllic andaluz setting of Ofertorios Galantes, nor the backdrop of empty streets and unwelcoming corners for the duels of guapos – or maybe it was both. Nevertheless, I take it that Evaristo Carriego’s poetry was never about Palermo. Carriego’s loving poet that sings about the eyes of the beloved, or his compadres and guapos singing coplas about their old victories are heroes not of Palermo but of the tragedy in which Carriego saw himself involved: the tragedy of oblivion. Evaristo Carriego suffered from Tuberculosis and died when he was 29 years old. During his last years, conscious of his tragic destiny, Carriego grew desperate for recognition. He found solace in the hope of literary immortality. Borges says that Carriego used to go to the literary cafes of Buenos Aires and fervently defend his verses and, in Carriego’s words, ‘his talent’. He also made sure, by criticising those who were included in it, that he would have a place in the Argentine cannon. It was not vanity what drove him, but the remote dream:

‘[t]hat this verse, which you have lost,
find you, as if it was sent
from memories left
in a land of oblivion…
as an insinuation to your ear
of its most secret agony,
when in your nights, restless
due to the memories, maybe,
you read, at least once,
the stanzas of the poet.

I? Live with the passion
Of that remote dream…’
‍

I doubt that he ever was part of the Argentine cannon. Arguably, the closest he got to it was through Borges’ book and through the lyrics and sentimental melodies of some Tangos, which found in him an early inspiration. Yet, I believe that Borges thought of Carriego when he wrote:

Blindly the soul wilfully asks for eternity
When its eternity is assured in the lives of others
When you yourself are the realised continuation
Of those who did not know your time
And others will be (and are) your immortality on earth.
‍

Borges thought that Carriego, as well as all those who lived before us, persist in those actions we perform that mimic theirs. In fact, Borges did not think that we engage in a mimetic enterprise when we perform the movements, gestures and routines of Carriego, but rather that, for that moment, we are Carriego and that time is, therefore, non-linear. Borges thought that this identification with people that lived before us proved the circularity of time, as he later argued in New Refutation of Time.

I think that this strict identity in action is dubious, but not so in consciousness. We are, unfortunately, incapable of being materially identical to Carriego in our actions; yet, I believe, we can have an identical conscience to Carriego by seeing and thinking (strictly) the same things that he did at some moment in time. As Allan Bloom notes, ‘when two persons prove the Pythagorean theorem together, they are for that moment undeniably one, seeing and thinking the same things. They are really the same that moment in a way that persons are not in any kind of relationships.’ Surely, if we tried to unify our conscience with Carriego’s and revive it by way of walking in Palermo and perceiving the same things as Carriego perceived, we would dramatically fail. The things that he perceived are no longer, and the ones we perceive were not yet. However, this is not true for incorruptible objects, such as Pythagoras’s theorem or El Secreto. Translating El Secreto is, I believe, seeing and thinking what Carriego saw and thought when writing it, and reading it for the first time is doing what he once did. I hope, then, that in this translation and in its few readers Carriego will, for the length of 12 verses, live again.

After graduating from LSE’s BSc. in Politics and Philosophy and MSc. in Political Theory Facundo is looking forward to starting his MPhil. in Philosophy at Cambridge. He grew up near Buenos Aires, where he wrote his first poems trying to imitate Borges, Vallejo and Paz; now, in London, he poorly emulates Lope de Vega’s verses.

An Object to an Orbit & Boat Going Through Inlet