The Salvage
|
Kimon and Myrtias 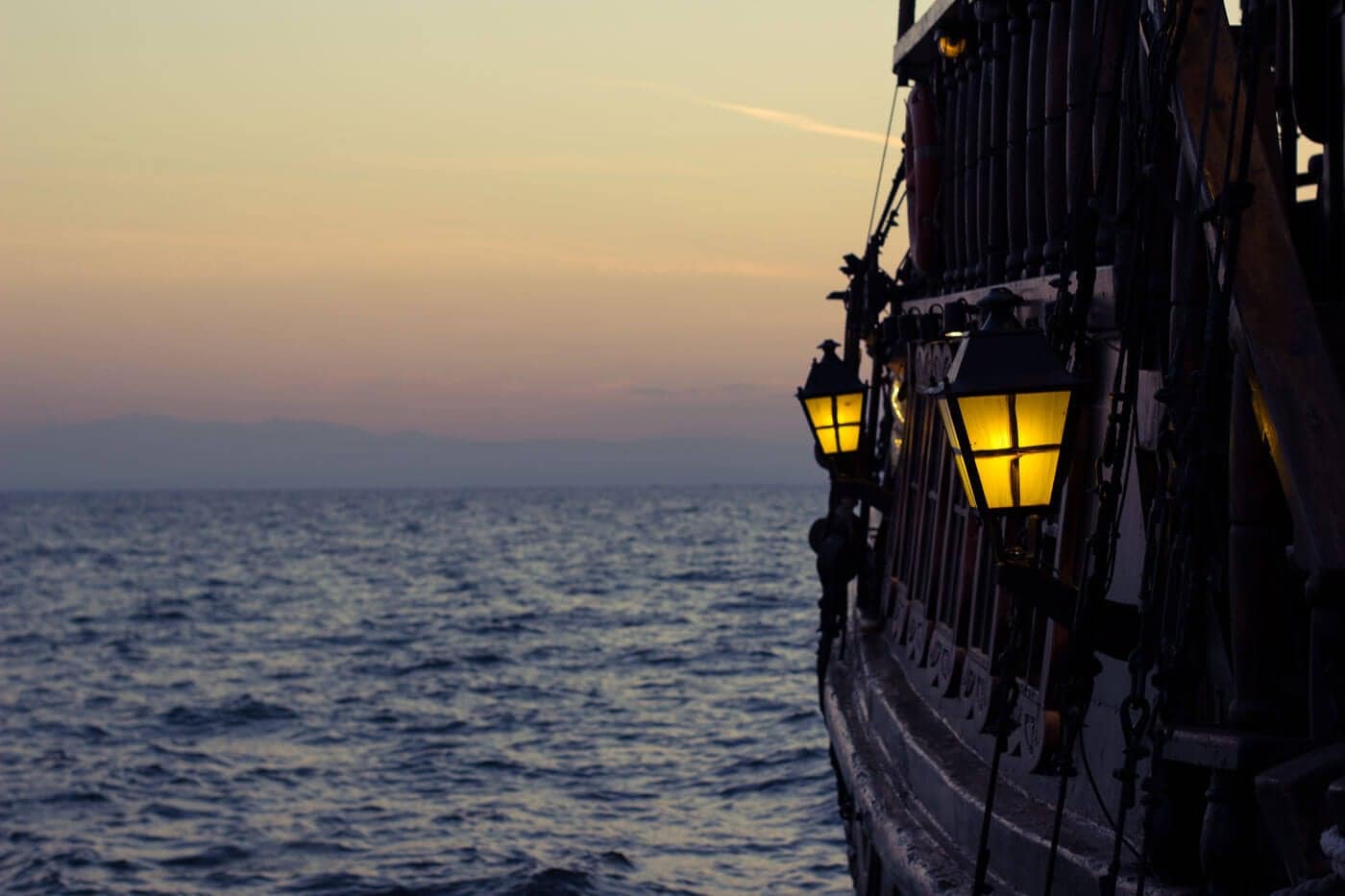 ‘Oh, to be back in the fine days of my youth, there were beautiful ships – clippers with tall masts touching the sky, challenging God himself. Fine strong men in them, men that were sons of the sea as if it was the mother that bore them. The clean skins of them, and the clear eyes, the straight backs! Brave men they were, and bold men surely! We'd be making sail in the dawn, with a fair breeze, singing a chanty song with no care to it. And astern the land would be sinking low and dying out, but we'd give it no heed but a laugh, and never a look behind. For the day that was, was enough.

To be scudding south again with the power of the sirocco driving her on steady through the nights and the days… Full sail on her, nights and days! Nights when the foam of the wake would be flaming with fire, when the sky would be blazing and winking with stars. Or the full of the moon maybe. Then you'd see her driving through the grey night, her sails stretching aloft all silver and white, not a sound on the deck, the lot of us dreaming dreams, till you'd believe it was no real ship at all you was on but a ghost ship like in those tales they used to tell as, once we reached ports of unknown towns.

And there were other days, too. A warm sun on the clean decks. Sun warming the blood of you, and wind over the miles of shiny green ocean like strong drink to your lungs. Work – aye, hard work – but who'd mind that at all? Sure, you worked under the sky and 'twas work with skill and daring to it. And with the day done, in the dog watch, smoking my pipe at ease, the lookout would be raising land maybe, and we'd see the mountains of South America with the red fire of the setting sun painting their white tops and the clouds floating by them!

But now, what's the use of talking? There is no silence upon the earth or even under it like that of the sea. For there is the sea, and on the other side of the sea is the world.’

The wind howled past his head, casting ripples on the sheen of water covering the deck. He tugged the windbreaker closer to his body. The sea, he thought, had treasured his memories deeper than the faithless land, where worms lust under the loam-sweet root and pale land trembles, frail. Time is tamed, as the waves beat out its passage on the rocks and the tides rise and fall as a giant clepsydra. A time older than the time of chronometers, older than time counted by worried men, lying awake, between midnight and dawn, calculating the future, trying to unweave and to unravel, when the past is all deception and the future bears no surprise.

He propped his elbows on the banister, cupping his chin in his palms. He hadspent uncounted hours sitting at the bow looking at the water and the sky, studying each wave, different from the last, seeing how it caught the light, the air, the wind; watching patterns, the sweep of it all, and letting it take him. Even when the sun burned like a flame. When the days had shortened, and night came swiftly. One moment it was light, the next it was dark. The sun did not set but fell into the water like a meteor. Late in the evening, when he would ago out briefly, a hot wind would slap his face and at times, he would hear his name in the clamor, summoning him to join the nocturnal dance.

The sea was dark below, the crests of the waves glistening here and there in the moonlight. She often spoke. Soothing him. Confiding in him. Commanding him. The voice of the sea is seductive; never ceasing, whispering, clamoring, murmuring, inviting the soul to wander for a spell in abysses of seclusion, to lose itself in mazes of inward contemplation. The voice of the sea speaks to the soul, sensuous, enfolding the body in its soft, close embrace. The menace and caress of wave that breaks on water, the distant rote in the granite teeth, and the wailing warning form the approaching headland are all sea voices, and the heaving groaner rounded homewards, and the seagull.

And he in turn responded, finding companionship in the deafening silence. He needed the solitude, as at this time, histhoughts seemed to lie at the very centre of the world, as the ship which carries one always remains the centre figure of the round horizon. The mind moves more freely in the presence of that boundless expanse, that the sight of it elevates the soul and gives rise to thoughts of the infinite. Of the ideal, perhaps.