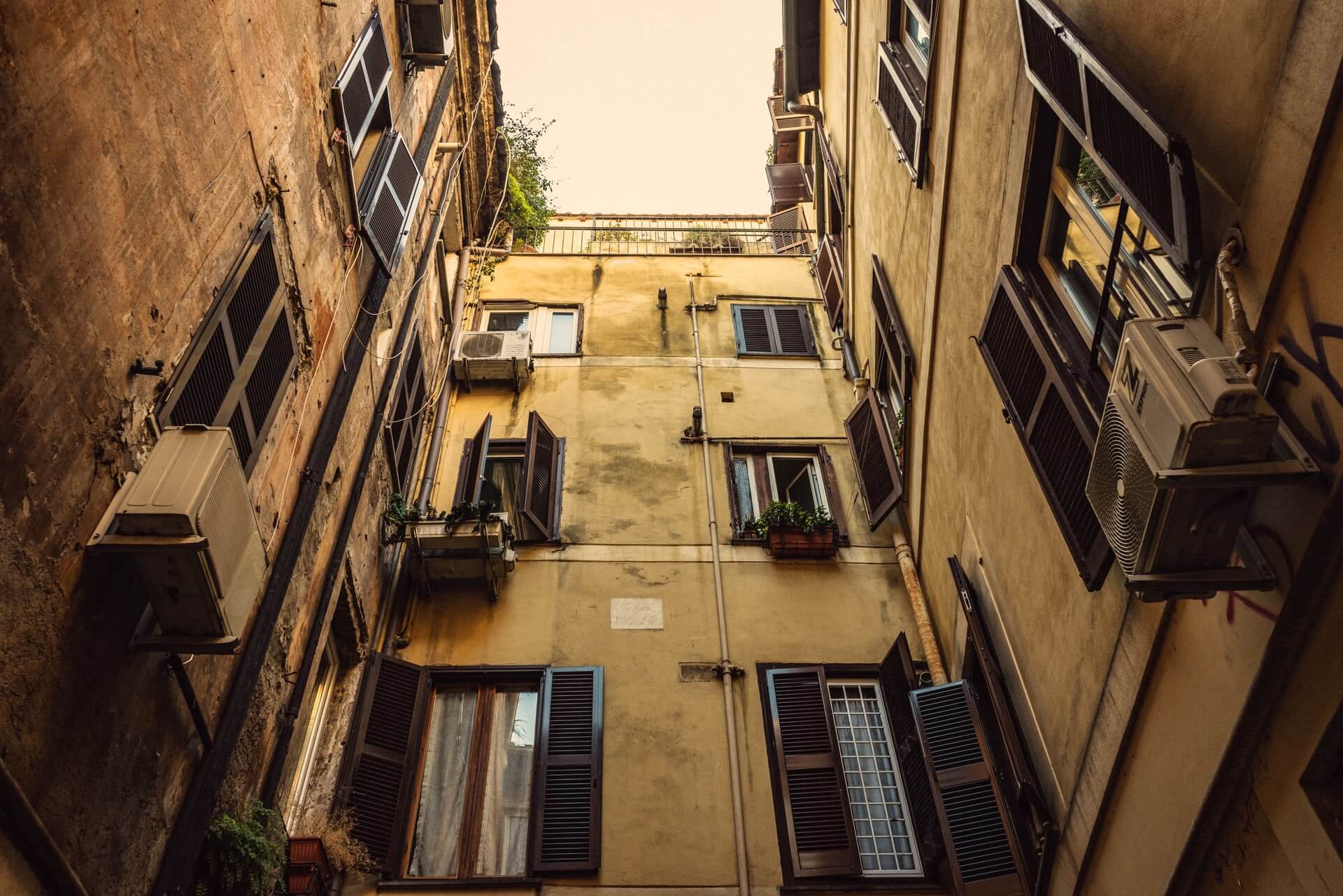 Calm, my creatures, keep calm
Yes, children, be silent, for daddy’s just coming
Oh dolorous Virgin of Weeping
Provide for me you as you can

No, my dear viscera, don’t cry
Don’t make me die heartbroken like this
He will have found something
and we will get the bread and you will eat

If you only knew how much I love you
What do you say, Peppe, you don’t want to be in darkness?
Son, what am I to do if there’s no oil (for the lamp)?

And you, Lalla, what’s the matter? Poor Lalla
Are you cold? Well don’t just stay thereby the wall.
Come to your mother’s arms/lap and she’ll warm you.

The Italian poet Giuseppe Gioachino Belli (1791-1863) wrote thousands of sonnets about Rome during the Risorgimento, when the Catholic Church lost much of its power and the various states in the Italian peninsula were unified into a single state. His quietly revolutionary choice to write in the Romanesco street talk of the time and focus on the underbelly of Roman society created a precious contemporary documentation of a sublimely irreverent people who might otherwise have been lost in time. But although Belli is as well-known and revered by Italians as Shakespeare is by the British, he has not travelled as well. This relative anonymity outside of Italy has been attributed to the ‘dialect’ Belli used – an authentic voice that has proved tricky to translate because of the strictures of literary English and the likely intended subjectiveness of the original sonnets. Inventive translators who turned to street speech and dialect to convey the nuances of Romanesco, however, have demonstrated that a less conventional approach to translating Belli’s sonnets could help export one of Italy’s most important treasures to the English-speaking world. Geordie, from the North of England, is one such dialect. There is something about it that reminds me of the Romanesco I grew up hearing all around me.

Romanesco, or romanaccio, was like a second language to Italians born or resident in Rome. Most could speak Italian as well as the next person, but an earthier way of speaking was often necessary (and preferred) for expressing the joys and frustration of daily living. Perhaps this is was what Gioachino Belli felt also. A highly literate and relatively conventional man, perhaps he felt that only Romanesco provided the sounds he needed to express his outrage over the church and state’s treatment of the poor, the weak, and the disenfranchised. Through his sonnets he satirised the rampant hypocrisy of the Catholic church and commented sharply on the crippling poverty that afflicted the vast majority of Romans. Through poetry, he encouraged his readers to look beyond the gilded trappings of the powerful and see truth and beauty in the lives of the wretched. Consequently, in Italy, he is famed for his often obscene and blasphemous sonnets, and beloved for conveying not only the beauty of the Romanesco language but also of the humble people who spoke it. His introduction to his collected sonnets says: "I have decided to leave a monument to the common people of Rome today…" Interestingly, as he neared death, Belli reconsidered his sonnets to be 'full of blameworthy opinions and thoughts', and instructed that they be destroyed. Fortunately, his son disagreed and ensured their publication. Although the first complete edition was published only in 1952, Belli’s sonnets are indeed a fine monument, and they deserve far wider acclaim.

‘La Famija Poverella’ – The Poah Li’ul Famly in Geordie – exemplifies how Belli could take a situation and reveal its protagonists in all their gritty reality, using the brevity of a sonnet to offer a glimpse into the wretchedness and humanity of daily lives. In ‘La Famija’, the voice is the mother’s, and we learn that her children are hungry and cold, and afraid of the dark. We learn that the father figure has gone to ‘find’ something with which to buy food, a possible euphemism for stealing, and we see how the mother ekes out hope despite her resignation to darkness. Belli keenly observes the resilience of the common people and their resourcefulness: a mother kept her children warm and safe, and a father provided for them as best he could because they could not depend on the responsible authorities or the church. There is an urging here to truly see the people and their suffering, and not walk past them. This would have been a revolutionary idea among many literate people of the time, who were more likely to ignore the poor and instead deify power, riches, and philosophical abstractions. Many of these ‘literati’ might not have understood the sonnets, however, and the poor illiterate Romans would not have been able to read them at all. But it is a function of the beauty and truth of Belli’s work that it is taught in all Italian schools and so persists to this day. Belli’s sonnets deserve to be better known, but translating them has proved tricky.

The substantial difficulties in translating Belli stem from the structure of his sonnets, from the slangy language used, and also due to the plentiful references to Catholic prayers and culture, whose nuances are easily lost in translation. The structure of abba, abba, cdc, ede follows Petrarch’s rhyming rules rather than the English form of three quatrains and a couplet abab, cdcd, efef, gg. Petrarchian sonnet form works well for Romanesco with its plentiful rhyming words but not for the less rhymy English. To deal with the rhyming, the above translation of ‘La Famijja’ into Geordie uses a hybrid Crybin form, which is helped by the more open vowels and emphatic consonants of the Northern dialect. Like Romanesco, Geordie also is characterized by fluid grammatical rules and local words with no easy equivalent. Translating into dialect is not an original approach, however. To avoid the strictures of standard English, inventive translators such as Robert Garioch, Harold Norse, Anthony Burgess, and Peter Dale have previously relied on Lallans, New Yorker, Lancastrian, and Australian ‘Stryne’ respectively to translate Belli’s sonnets, especially the most shocking ones. Standard English is simply too polite to capture the musicality, texture and vividness of Romanesco. Geordie provides an additional vehicle for translating the humanity of Belli, with its particular words and translingualism borrowed from Norse as well as Saxon, Latin and Celt. Further, with its emphatic consonants and wayward endings, the sound of Romanesco is quite different to standard Italian, just as Geordie sounds different to standard English. The deliberate flouting of linguistic rules in Romanesco makes perfect sense for those who know the people of Rome – a people who defied authority, and still do. The Geordie culture and somewhat anarchic of speaking conveys a similar playful irreverence, and Geordie is perhaps more accessible than many other dialects spoken in Britain.

Inventive translators who adopt street speech and dialect to convey the nuances of Romanesco may help to more effectively export Belli’s sonnets to the English-speaking world. These sonnets deserve to be better known since Belli laid the foundations for an Italian literary tradition that moved away from legendary heroes to focus on the real lives of real people. This tradition would later give us directors like Roberto Rossellini and Federico Fellini, and authors like Alberto Moravia who celebrated the ‘little’ person and the human condition. Belli’s sonnets reinforced the idea that common people deserved a voice in literature and art, paving the way for films such as Roma Città Aperta (Rome Open City, 1945) and La Strada (The Road, 1954), and books such Racconti Romani (Roman Tales, 1954) and La Ciociara (Two Women, 1957). Thus, translations with popular dialects such as Geordie could lead to a wider appreciation of Belli’s work and not only provide a window into Italy’s past but also further a broader understanding of modern Italian culture and aesthetics. There are 2279 Belli sonnets – surely a worthy challenge for Geordie translators to attempt!

With thanks to Michelle Egan and Graeme Bell for their assistance with the current Geordie speech.

The soldier poet by Eduardo Gutiérrez

The Bartender, a Monodrama