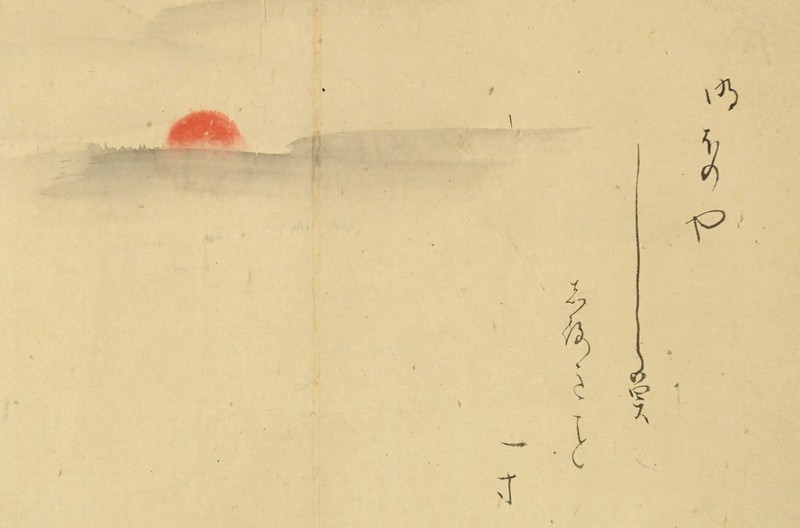 [A haiku and illustration by Basho  on a handscroll of his travel account "Nozarashi Kiko," in Kyoto's Ukyo Ward]

into past water
a frog dives sudden, trembling
hear its song today

The rhythm of Japanese moves much like the sound of water, languorous one moment, crashing into consonants the next. It’s composed of sounds that when arranged playfully, hold the potential for meanings beyond the obvious.

This translation is an (un)faithful one, of perhaps the most famous haiku in Japan. Written by Matsuo Bashō (松尾芭蕉) in 1686, it is composed of three unrhymed lines, the first and third line of five syllables, the second of seven. Haiku is an offshoot, or rather, a little sister of waka poetry, the traditional art of poetic composition in Japan. Waka the 'poetry, or song of Japan,’ evolved into an all-inclusive category, including: tanka (‘short poem’), chōka (‘long poem’), and sedōka (‘repeating-the-beginning poem’). Haiku began as a component of a much longer poetic form called renga, as a prologue or overture of the longer work to come. Now, people in Japan and across the world write poems in haiku’s short form, which requires a writer to follow the 5 - 7 - 5 syllabic format and, in some way, allude to a change in season.

Japanese, unlike English, is written without spaces between words. Words are either written in kanji (symbolically-infused characters, inherited from old Chinese) or hiragana (a phonetic alphabet), though not all words have an assigned symbolic character. For instance, the original haiku begins with a noun, ‘古池’ (ふるいけ), pronounced furuike. It is a composite word of two words, furu (古) and ike (池), which together translates literally into ‘old pond’ (this poem has in fact often been referred to in English as ‘The Old Pond’). The final syllable of the first line, ya (や) indicates a direction (though if written today ni (に) would be used instead, if in casual conversation). Furui (ふるい) for example, the first three sounds of the first line, outside of the context of their kanji can also mean ‘trembling.’

There is a way in which, if one ignores the imposition of kanji, a haiku can be translated to convey more than a poem’s original, or intended meaning. In fact, there’s always a way, in Japanese, for the surface of a poem to conceal other possibilities underneath, based on the composition of its sound. How then, could someone translate this haiku not only in meaning, but into a different language while conveying the multiplicity of interpretations inherent within the poem? Is there a way to gesture to Bashō’s initial, unknowable poetic intention and translate that to our world today?

Legend has it that Matsuo Bashō composed this haiku in a retreat, where writers were sitting together, in a room by a pond. Apparently, the group was tasked with writing a poem using the word kawazu in it, an old word for ‘frog’ in the Japanese language (now, people use the word kaeru). Frogs have tended to be associated with spring, with rebirth. As Bashō became enshrined in poetic lore, others have claimed that this arrangement of sounds and meaning came to him spontaneously, already perfectly formed. Regardless, the intrigue behind the compositional process indicates the cultural relevance and appreciation for this haiku.

But what moves people about this poem? The thought of a playful frog, perhaps jumping in the water to celebrate the beginning of spring? Or the thought of a despondent frog, perhaps jumping in the water to commit suicide, leaving the observer with only the sound of water? Or the possibility that this is an alternative to the age-old question, ‘if a tree falls in the forest, does anyone hear it?’ In this case, ‘if a frog jumps into a pond, does anybody hear it?’ and by extension, ‘is it the frog we hear, or the sound of the water?'

I wonder, also, if this poem is also about the act of artistic composition. The world of poetry has often been compared to a vast lake, containing relics of the past and openings, for future play. Reading this poem as a contemporary Japanese speaker, rather than one of Bashō’s time, I also always notice my mind instinctively correcting the word kawazu to kaeru, as mentioned earlier. Kaeru, incidentally, pronounced with a different intonation, means ‘to return.’ As a reader in 2022, I’ve often read this poem as a challenge. A dare for us all to jump into the waters of artmaking, to plumb the depths of history and come out of it, reborn and scarred and hopeful, with every new season.

A question about the ethics of translation: if I have an interpretation of a work, which may be completely incorrect, but with an interest in conveying what I think this could mean for readers today, is translating it with that as my compass a ‘faithful’ or ‘unfaithful’ act? In other words, if I stretch a poem into a new language, following its form (5 - 7 - 5) but distorting its words, is it ruinous?

Perhaps translation can be a form of arts criticism, of the work it’s bringing into new view, through a language foreign to its origin. Still devoted to an original from centuries past by transposing it into the present, through a mirror that gestures to all of its possibilities.

If I read this poem as a challenge to listen to past artistic work and jump into its fray, how could I convey the feeling of being overwhelmed by its scope? When I think of it all, I tremble. So, obviously, that word had to be included in this English translation, as a gesture to its Japanese counterpart, fluttering underneath the subtext of both the original and translated poem.

That is the approach I took to designing much of the work. In the first line, rather than stating ‘old pond,’ which most English readers familiar with this poem would be aware of, I chose to translate it to ‘past water,’ gesturing to the presence of poetry and art of the past, contained in this real pond in our collective imaginary. In the second line, I chose to use ‘dive’ as the verb to indicate the enthusiasm but also the potentially fatal entrance of the frog into the water. Engaging with art, after all, can bring to the surface unexamined trauma and discord. Though the timing of the leap is never mentioned in the Japanese original, tobikomu (飛び込む) is a kind of jump that indicates an energy and direction. I chose to add the word ‘sudden’ to convey the intensity of the force of the frog’s entrance into the water, that could cause the frog, the water, and the reader, to each tremble at its impact. Finally for the third line, I wanted to ensure that it served as a lynchpin for my interpretation of the poem. Because I had mentioned ‘water’ in the first line, I was able to select a sequence of words that would highlight the existence of the sound of this poem in our minds, even today. To complete the translation, rather than translating oto (音) literally to ‘sound,’ I thought, why not mess around with it? Stretch it to ‘song?’ For isn’t that what Bashō made for us all those years ago, a composition for us to revisit, again and again and again?