Carving Out a City
|
Konstantinos Doxiadis 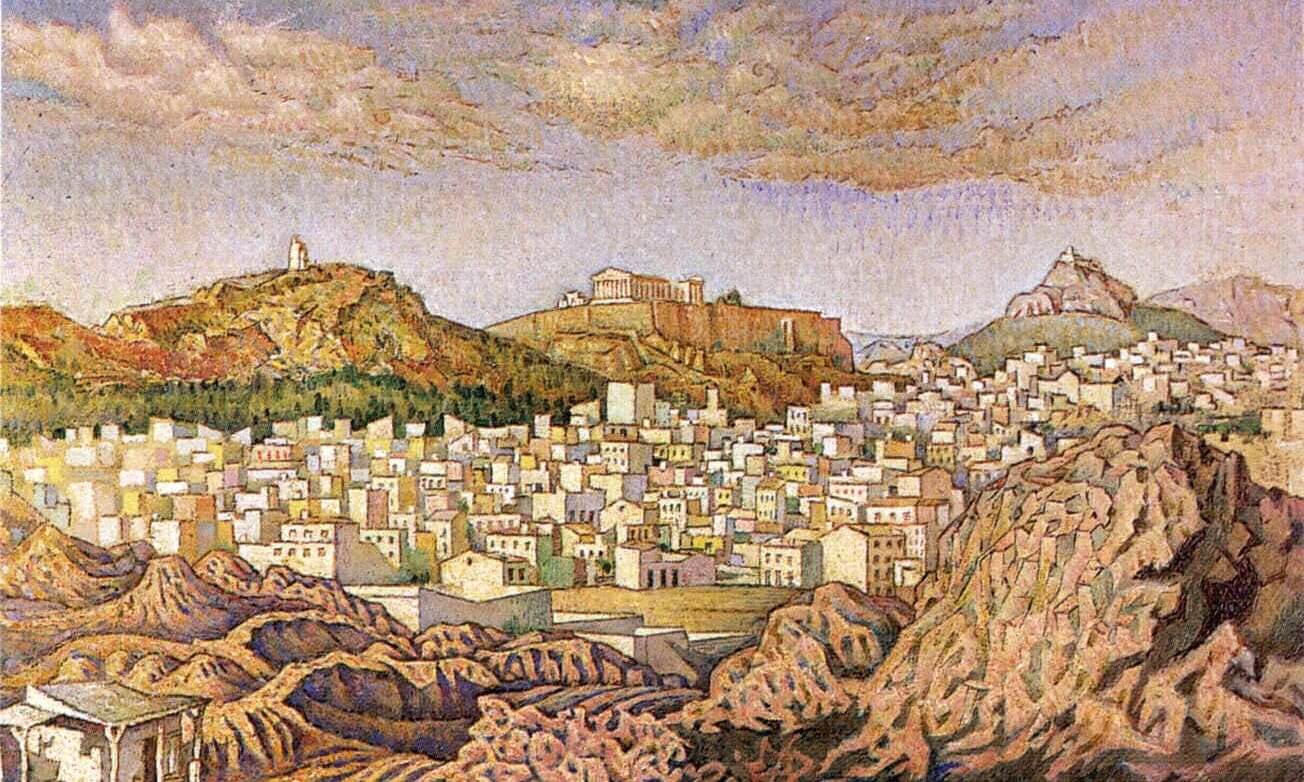 Dawn was breaking over the mountains, its first sheen glancing off the peaks, and then slowly rolling down the slopes, washing over the forests. Below, a city lay asleep. And the dawn swept out across the sea. Rushed clear over still waters, spooling from the harbour’s mouth. And the light extended its embrace around the basin, enveloping the valley in its warmth. The city was rising, its waking groans stirring past the deep silence of the night. And through the faded darkness shone a new blue, a softer blue, drawing its hue from the mounting waves.

Here lay a life, cold, marbled and inanimate. Yet a life like no other. Twining and twisting the fabric of time in its grasp. Here lay Athens, the city that never was, and the city that never will be. Here lay Athens, the throbbing mass of human endeavour, pulsating madly against the frailty of her kind. Here she lay, unmasked and unguarded. That temple of ambition. That relic of purpose, meaning and truth.

But the city was, in fact, merely a village. Condemned, for all eternity, to be nothing but a village. A mere shadow of what its people dreamed for it to be. Home only to that endless desire for change, blinded from its own immortality.

This was a city that strove for the dawn. Willing with each morning for a new day to come and flush out the past. Flush it far from the basin, and far from its shore. So far, that were you to scale the tallest pine atop its greatest peak, you’d see nothing, save for the sprawling embrace of the Aegean Sea.

And come morn, the people would cast away their memories, and with great effort and precision turn their gaze unto the roads. They would fell timber and spool cloth, building and boarding their floating coffins. And with the force of self-delusion they would sail, away from the harbour and out to the sea. But the gales and the salt mist would hound them, and bewildered they would dock on foreign shores. Disembarking to lands of ruin and destruction, whose only inhabitants were the memories they themselves had expelled in disgust.

Oh. Clouded were their eyes and clouded their judgment. For as time passed, and the farers ventured ever further, so too did they forget of their city’s embrace. And anew did they begin – from life unto nothing, and from nothing unto life. Here it was to be erected, their mausoleum of forgotten. Far from the damning glare of Athens. And it was to be left to age alone, as all around them, time began to rot.

And such is their derision, that day after day they chip away at the stone, bloodying their hands from the toil. Until the darkness again grows and befalls them, shrouding their frail eyes from the beauty they have birthed.


II – And The Day Begins

First come the sounds. The early-morning merchants, peddling their wares in the markets; the children pushing past and shouting in the streets; the dogs and livestock, a raucous, endless din, fighting in vain to keep each other in check. And the cicadas. From dawn unto dusk the cicadas… The city is defined by them. A living, breathing, metronome, beating out the people’s pulse. Giving rhythm to the movements of the day.

The old masters used to say that in the moment of creation, in that birthing of new life, it is a single breath which strikes the beginning. The bated breath of the craftsman. The stifled gasp of the pregnant mother. Holding life, and giving life again. Imparting that single breath far into the world. Thus, it is only fit that the children of Athens arise at night, alone against the silence of the sleeping cicadas. Living in the splendour of this moment of creation. And the streets are filled to the brim, late-night taverns spilling out onto the squares, bards and musicians stringing sweet chords through the alleys, and distant travellers dragging weary horses through stables and dirt paths.

But the children do not mind. For through the noise and the turmoil, through the stench and the stultifying air, comes a deeper silence, one that only they can hear. It is a silence without warmth. A silence that commands all who dare speak. And yet, it is only here that the children are once more at home, enveloped in their own solitude. It is in this prison, in this cell without walls, that they’re once again truly free to dream.

More than a Moth