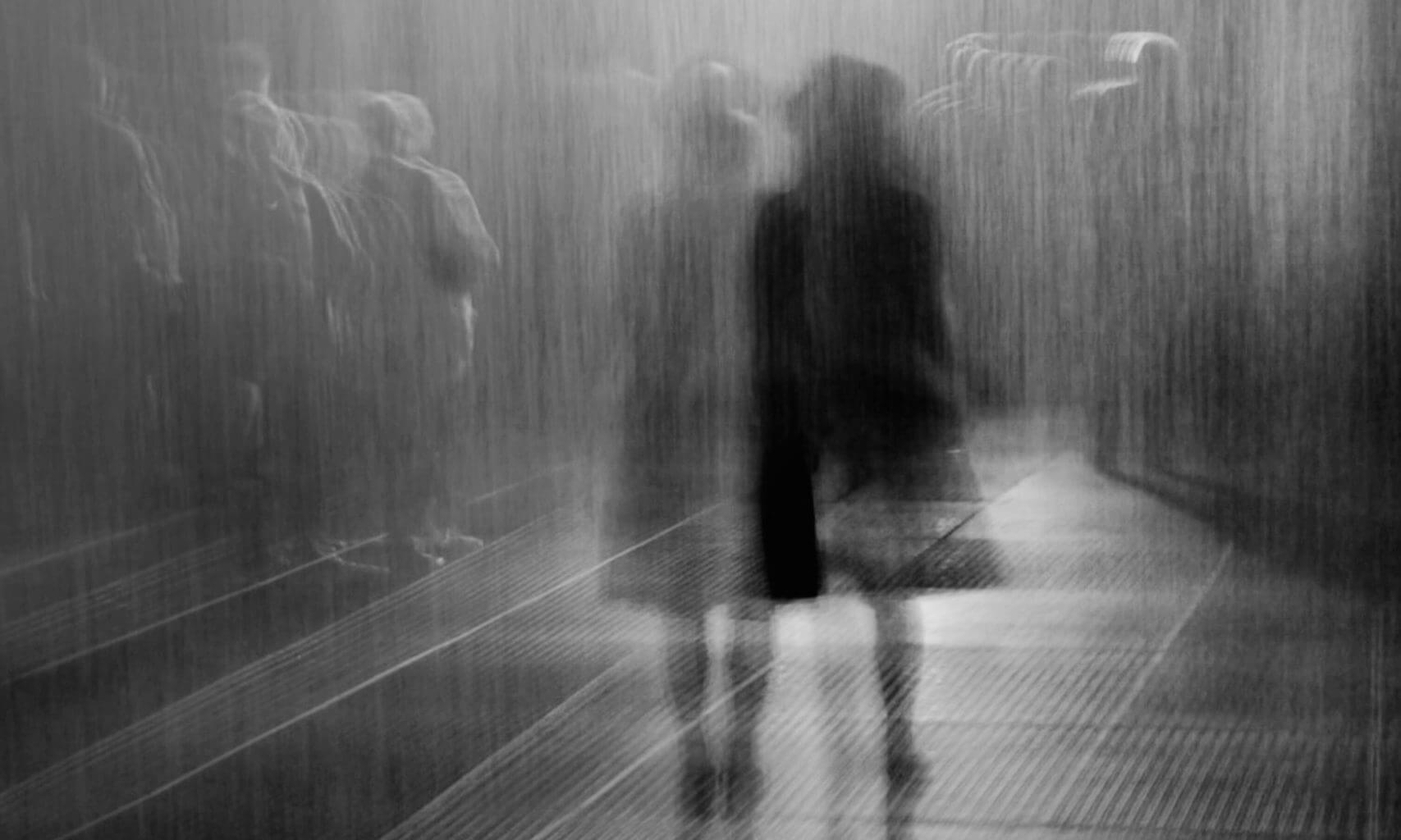 Note the porticos, the stairways and alleys of this unusual city. Its crumbling white outer walls stand resplendent with covert spots of sunlight, with dirt. The denizens of this city nod off in corners, deliver papers, shout and smoke delicious fumes from long funneled pipes. An air of music, melancholic and sweet, flits through the city. Forgotten papers and debris litter the streets trod upon by the thoughtfully busy ladies and men who go about their working day. That the city is high up in the air—in the midst of remote, wispily-clouded mountains—troubles them not the least.

An orphanage stands in the middle of the city. A long, low white-painted building with many windows and a great hall. It was there that Lydia and Antony met for the first time. Orphan children, they began to date as teenagers—having finally found happiness, each other—then were separated, as, rather inexplicably, long-lost uncles found them and attempted to give them better lives.

When Antony and Lydia mourned for each other, many years later, the visage of the other resurfaced in their dreaming minds along with the disturbed cries of that often sun-gauzed city.

At a spa in the mountains, centuries later, we observed that they met again. Lydia played for Antony an air on the viola, a refrain he dimly recognized from his past life in the white city. This incarnation of Lydia, as before, was an embodiment of light, dancing in her graceful expressions, human kindness and musical talent. She had hazelnut-colored eyes. Antony boasted clever, passionate and deeply attractive brown eyes. Unlike his previous incarnation, where he was a bit of a good-hearted rascal, in this existence he had developed a firm—yet always honest—business sense, and was a successful man.

This did not bode well for us, for we knew that Lydia found attraction in a man who was not only gentle and sweet, but practical-minded.

The situation worsened as they talked—he knew the import business her father started, and commended it—she had lived for fifteen years across from the same grand river as he. Many fortuitous coincidences connected them. In the high mountains, they fell in love. Each morning at the hotel, Antony rose at dawn. He paced his room, then went to hear Lydia’s surprising laughter at tea. Each sunrise and sunset existed for the purpose of looking into each other’s eyes.

And yet, they would never fall into one another’s arms, as Antony suffered a massive heart attack on spa grounds, on the seventh morning.

Though it did not shock us, his death shocked all on spa grounds. He was young, and had been considered healthy.

Note the dusty town, its red lowland dirt, wooden buildings and windy streets. In the midst of town stood an old-fashioned bar. A cocktail waitress named Layla worked there. Her only known relation, an uncle, had died; she’d grown up an orphan. Her uncle rumored that she had a long-lost sister—a sickly, emerald-eyed girl, given up for adoption before Layla’s birth and their parents’ death—and this notion haunted her days.

One evening a gentleman named Armand arrived. Unlike the bar’s other customers, he dressed well, and refrained from cursing. A traveling businessman, he requested tea to drink—Ceylon, to be exact. “But we don’t have any tea,” Layla replied. So he sat and talked to her at the bar, resting his legs on the stool and enjoying the shade, for the country outdoors was punishing and hot. Armand’s sparkling brown eyes rang out to her with a certain uncanny familiarity. He wore a navy jacket, with slacks and black shoes, recently shined, though slightly dusty from his walk.

He immediately noticed her laugh and hazelnut-colored eyes.

After serving hours ended, he asked Layla for a whiskey and they continued their conversation at the bar. Unused to alcohol—a feature which endeared him to her immensely—he spilled his life’s secrets, laughing and talking, and they found out strange little coincidences about each other. The world vanished. Then, Layla overheard the bar manager. He was placing a phone call, muttering something about a “dirty foreigner.”

Epilepsy is an incredible disease. A fitful, fulminant explosion of colors on the brain. It is one of the diseases we gods use overmuch, throwing thunder from our heavens to silence the more difficult, willful humans. Take a woman who doesn’t recall the past transgressions of her ancestors. How they fall in love with those they are not supposed to, demand more from existence, cross lines of decorum. Young Evelyn’s epileptic fits raged especially severe. A grand mal could drop her in an instant, and on one such occasion her college dormitory roommate literally felt the tormenting heat swell the top of poor convulsive Evelyn’s head.

The roommate, whom we could not dissuade (our powers being not all), rushed Evelyn to the emergency hospital. There, after she recovered, we observed helplessly as Evelyn fell under the spell of a fellow patient, a brown-eyed man. Before being discharged, she felt the eerie sense she just had to see him again, and asked for his number. Two days after leaving however, Evelyn relapsed and died.

We don’t know what happened to the brown-eyed gentleman.

When the demigod Niobe transgressed against us with her pride, we fixed her by freezing her into the form of a crying rock and by punishing all her children, either killing them or completely ruining their lives. However, our Olympian punishment not being thoughtfully comprehensive, we overlooked Niobe’s sister. Now, we are forever trying to catch Niobe’s sister’s offspring, the two daughters, one named Lydia and another, a sickly, emerald-eyed girl—and stop them from having the same enjoyments—love, child-rearing—that led to Niobe’s pride. We gods do not like to feel offended.

A small city, perhaps in Ireland. An improvised bomb went off in a seedy corner—chaos ran rampant. A journalist named Lydia coped by drinking generous amounts of coffee and meeting her contacts at a bustling café. She hadn’t yet asked Antony about his personal life, but found she enjoyed his company. For some odd reason she kept running into him: at the back of a church with a mutual acquaintance; a restaurant before the attacks; a bar. In addition to discovering strange coincidences they shared, she simply found warm, human comfort in being with him. His face began to haunt her memories, and when she gazed into a café window or leaned over her notepad, she found herself distracted, more so than by the chaos in the city. Was he available? she wondered.

They met again in the public cemetery. Antony offered his hand over the grave of a colleague. Lydia took his hand. She could have jumped for joy, though they stood in a cemetery and should have felt mournful. Antony loved her as well—and they were already thinking of a future family. Perhaps there also was an aspect of pride brewing in them.

A terrorist bomb killed them where they stood. The locals felt so much pity for the dead couple—found holding hands in rigor mortis—that they buried the unidentified bodies and erected two beautiful stone statues.

The statues still exist. They face each other: a man, well-dressed, slightly taller; a woman, with a delicate expression and viola in hand (the sculptor took this liberty after a snippet of handwritten composition for viola was found in her pocket). Truthfully, the statues are a tad bit generic; though pretty, they are not truly elegant. We gods had been keeping track of Lydia and Antony—known, in other ages, by other names, such as Layla and Armand—this couple who have now met their ultimate end. We did feel slight pity for the two lovers, and even for our old enemy Niobe. The statues could have been better fashioned. Perhaps we are able to feel pity now that we have completed our belated sentence against Niobe’s sister, whom we petrified long ago, and her offspring Lydia (the other daughter having succumbed in another city, without much resistance).

The artist made another mistake. The statues were set too far apart, so Antony and Lydia look as if they can never quite reach each other, not even in death. Even the hands, clasped in life, were left reaching, apart; which really isn’t quite fair. When the rain falls upon the Irish cemetery, it falls across their faces. And it looks, almost, like they are crying.

The Sick Child and Silent the Sun Falls