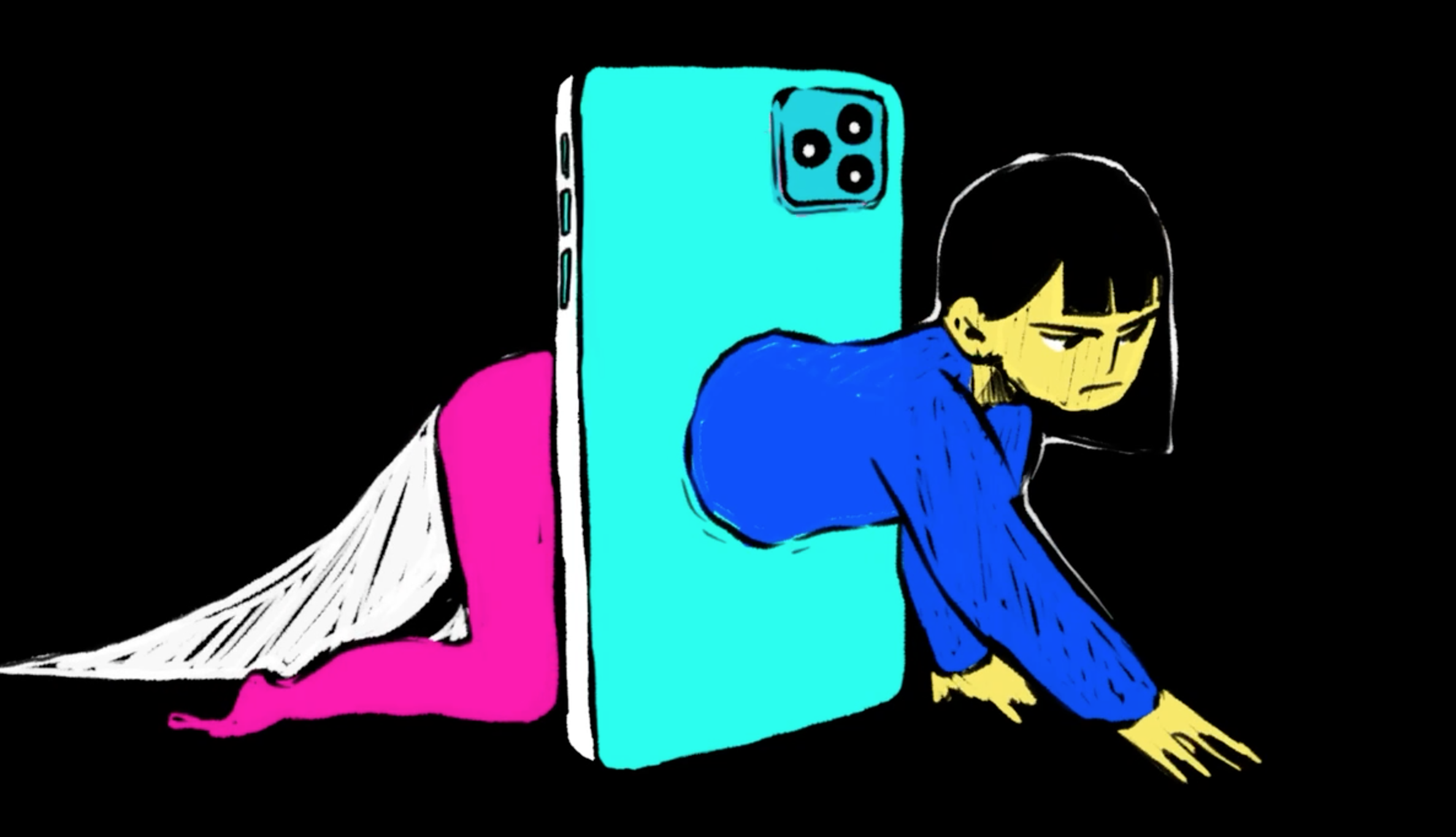 When people watch this I want them to see what their real reaction would be. Because it’s really close to our everyday life experiences.

It is not as ambiguous as how I could have made it. The message is pretty straightforward.

This is part of this continuous effort to continue a series. I find myself going back to it all the time. How we interact with our phone and especially with the Metaverse and cryptocurrency becoming a new wave of a popular topics. A lot more ideas are going to be explored. I’ll just keep doing them. I feel like these are just capturing a lot of my ideas and commentary on what’s going on in the present.

For this one in particular I wanted it to be still a part of what I was making before. Because conceptually it’s under the same theme. The impact of digital programming, social media technology on our personality. So a lot of the motifs are there. Even with the human character, she’s appeared in other doodles as well. The monstrous, doppelganger concept is also something I’ve kept exploring. I feel that they represent very specific concepts to me now, since I’ve been repeatedly using them. It’s just a matter of rearranging these concepts to express something new. So yes. I was consciously trying to make this part of what was before.

Could you see yourself maybe coming up with a sequence where you put them all next to each other and see what it becomes? Or does that not sound interesting to you?

Yeah. That was actually a project of mine. To make these every day or every week animation doodles as a challenge. With the same topic of tech influence. Eventually I’ll probably edit them together into a sequential thing that shares a theme.

Once you came up with the idea of the phone, the monstrous figure and the realistic figure, did how you picture it in your mind resemble what it ended up becoming?

The motion is exactly what I was picturing. This looped back-and-forth. A transformation through a phone. But I didn’t see clearly how each side would look. The initial image was really blurry but the motion and concept was there. But I feel like a lot of the detailing was about designing on the go. Of all the visuals, how each side would look. As I’m doing it I infuse it with more meaning.

So as this thing is taking shape, is there any moment in the creation process where you thought, ‘this is what I think I want it to be?’ Or did you not really know until you were completely done with it?

Especially in the first half of the process, as I was sketching out the composition and the basic line arts, I was letting it flow. I didn’t have any specific gesture or composition in mind. But after the two initial key frames are done it’s a lot more of a brainless job. Just filling in the details and the minor design choices. I feel like the first quarter of this was a lot more meditative in the sense that I let the concept unfold on paper.

It took around ten to fifteen minutes to figure out the color palette. Then afterwards it’s just about colouring in each frame. I started off with the phone. I wanted it to be something neon-ish, that represents a new tech era. So I landed on that neon-turquoise colour. For the two sides of the transformation, I wanted the right side, the ‘reality’ side to be more realistic. In the sense that the skin tone is closer to an actual, realistic skin tone, an actual hair colour, all of that. Then for the left side I consciously tried to keep the palette on each side very distinct [from each other]. So visibly they don’t belong in the same space. That there would be a contrast before and after the transformation. But I also kept some bits and hints of the color consistent, with the yellow. And a different shade of blue. But that was the general thought process.

Also I added… You know the three cameras on the phone?

I added three little pupils in there when I was colouring. It’s kind of like the phone is witnessing this whole transformation this person is going through. That was something I added during colouring.

It all feels like geometry. I have to estimate keeping the proportion right of every shape and estimate the midpoint distance of every frame with consideration for the template. The nice thing about the expression never changing is I just copied and pasted her face. At the end it just has to ease in.

How do you think about animation? Do you tend to think of it as an end product or as more of the experience of discovering the various ideas the product could become as it’s being created?

Oh, definitely the latter. Especially for the purpose of personal art. It would definitely be about the final product if it’s a work-for-hire kind of situation. But the reason I really enjoy these kind of doodles is that I’m able to allow it to be more about the process and having a meditation process of making this instead of having to worry what the product will look like. Because I don’t have any requirement for the end product.

I like how impromptu they are, how simultaneous they are! I think I’ll just keep doing that. Eventually when it gets to a certain amount that could be edited into a longer video I think that’ll be another version of the product.

When I was colouring this I actually had the idea of what the experience of seeing all of these doodles about tech influence would be like in a real-live installation environment. Having these projected on TV monitors. Being more confrontational in a public space instead of the phone. So I was wondering if that could be another way of presenting this or re-presenting these in a physical environment.

I love that you just pronounced it as ‘re-present’ because earlier we were talking about the meaning of represent, pronounced the other way. When we were talking about how animation can show an abstraction. But I love the way you just pointed to how animation is a way of re-writing how things are. These doodles are your way of re-constituting these ideas.

As you were speaking I was thinking about the kinds of narratives that could be written to address the fact that phones drain us of so many things but it allows us to think that we are always the protagonist in our lives. But the way we’re rendering ourselves is so obviously disconnected from our lived experiences. So for you if you could write a narrative piece about these doodles in some capacity, what would you want to say based on the abilities and powers of animation that you just mentioned in your most recent answer?

You brought up Spirited Away earlier. It’s really interesting that back then what was the bath house and the mystical parallel world that humans are not aware of is almost equivalent, if we want to put it broadly, to the Metaverse that people are trying to talk about right now. It seems so mysterious and so distant but so close. Almost overlapping with our physical world. It seems as if it could be a retelling of Spirited Away’s story structure. Just that the bath house is the digital world and the Metaverse, in a way. Exploring both things, good and bad. You know, protagonists and antagonists in that world that we have no control over. There’s so much potential there.

So many people seem to think about animation as just Disney movies and both of us know that’s completely untrue. What are its capabilities that you think so many people are actively ignoring as an artistic medium?

If you think about it, our generation, or the Millenials I’d say, we kind of grew up on animated content. Kind of regardless of what culture we come from. It’s such a huge part of our childhood. We’ve developed this really efficient visual literacy because of that. Now that we’re adults I think there are so many ways this visual literacy and comfort with this language can be used to represent a lot more content infused with ideologies for an adult audience that I think a lot of platforms for media and press are using. It allows for another form of expression that can be taken a lot more seriously than just entertainment.

Compared to more serious, textual representation or live-action representation, animation allows for a more joking attitude or a self-distancing one because it’s hand drawn. But it can also encapsulate so much more seriousness, in messages and thinking in abstract forms. For our generation in particular and for the following generations that grew up on visual literacy, media literacy… it’s going to be a powerful platform for expression.

Mulan Fu is an award-winning filmmaker, animator, and illustrator currently based in New York City and Shanghai. Her commercial work ranges from 2D cel animation, motion graphics, illustration to animated production creative development. She has recently graduated from the Film and Television major at New York University Tisch School of the Arts and is currently pursuing a master's degree in educational game design at Teachers College Columbia University.