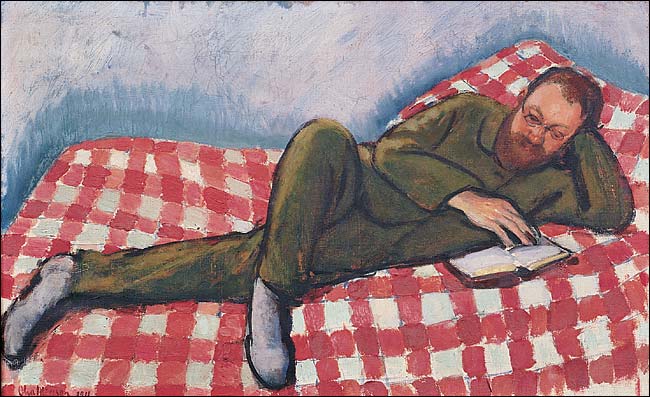 L’Escargot by Henri Matisse is large and immediately apparent to any Tate Britain visitor. It is likely to be either the first thing or the very last that you see in the gallery. Perhaps both. At a casual glance, it is a random arrangement of what seem to be scraps of coloured paper. ‘A child of six could do it.’ You can hear the bewildered or outraged cry from the casual glance.

Look again and you will see how artfully the pieces have been arranged. They seem to turn one way and then another, with the central hub remaining still. The harmony of shape and colour gives the work its sense of motion. It is art pulsating with vitality, like a machine, a beautiful machine. But it has no purpose except to be art, exquisitely simple yet so compelling. You stop and look calmly, carefully to see how it works. It works with you because it has life that speaks to the life that is you. There seems to be something living inside this arrangement of shapes. It is the spirit of Matisse himself.

It is, of course, a late work, a summation of a lifetime’s dedication to art. The artist’s eye sees many things. They cohere into a vision that the artist’s hand can express.  L’Escargot has the innocence of childhood and the maturity of disciplined technique. It has no material purpose, it has a deeper truth within itself.

It is hard work that fashions the art out of that initial moment of stellar conviction. There’s an idea that might work, an image or a sound. It has to be enticed out of its hiding place. The well of pure water is covered in thorns. They have to be hacked away, like all the unwanted emotions that encompass the essence of the senses. Those feelings of desire or jealousy are not what the artist needs. They need a desire for truth.

Later of course the intense emotions return to give flesh to the bones, but only when the water is drawn from the well. The hacking of the thorns and the winding of the water pail are the work that has to be done for the original thought to become a reality.

‘Art is not decorative,’ Francoise Gilot (an artist who knew Matisse well) wrote with her customary perception. ‘It is existential – it is a way to understand oneself, and also to have a transforming effect on others. People rarely get in touch with the forms of the universe. That is what I attempt to do.’

Towards the end of his long life Matisse was cared for by the sisters of a convent near his home in southern France. Matisse was not a communicant, having adopted an interfaith position. However, his respect for the Catholic nuns tempered whatever doubts and anxieties that dwelled in him. He designed a new chapel for them. La Chapelle du Rosaire in Vence is a place of pilgrimage for believers in art as well as faith. It is extraordinary for the sense of light that emanates not only from the windows, but especially from the spirit within the chapel walls. The harmony of light and space gives a sense of peace. It is peace of a kind that is not easily understood. This is not a matter of intellect, so perhaps it is not meant to be understood. It is intentionally mysterious.

To be in touch with the ‘forms of the universe’. That is a task no-one can undertake lightly. Of course we cannot understand others if we cannot understand ourselves. The face at the window, said Sartre, may be God, or it may be an illusion. It is for us to decide. Surely, we each must do this, trusting to our inner resources? The universe is not only out there. It is within us. The task is to reach it.

Such words are not simply decorative. It is more than a question of fine phrases, although these are welcome relief from the raucous cacophony that accompanies life now as it always has. Once there were cony-catchers. They have other names now, but tricksters they remain.

There is no mystery in a wholly material world. There are no faces at the window. All we have are tangible or audible effects. But where there is no area of doubt, there is no room for faith. When everything is decided, when everyone believes what everyone else believes there is no hitherto unknown passage to venture down. Everything is revealed in advance when the sense of mystery is abandoned. The result is not illumination but a life where meaning and purpose is sequestered. You can touch, you can hear but you cannot see.

Slowly the transformation comes about when we begin to understand that we do not understand everything. There are explorations to be made. There are experiences to undergo, enriching at times, but sometimes treacherous. There is an arresting passage in Horace’s Ars Poetica. (I remember reading it, but now cannot find that passage.) Horace says a poet must undergo experiences like shame, embarrassment and disappointment. These are the rites that transform ordinary life into art. We go down like Odysseus to seek advice in the Underworld. Only then can we develop an appreciation of the higher experiences, those angelic presences which lighten the darkness that is the blank page or screen.

Mallarmé wrote of ‘hearing the angel/giving a purer sense to the words of the tribe.’ He was writing among the tombs of Poe and Baudelaire, those wayward and intense challengers to the complacencies of their time. The Narrative of Arthur Gordon Pym, Poe’s great novel of the sea, is a tale not of heroism but of the savagery that lurks within the human mind.

We have been there before. This is not the Underworld perhaps, but the labyrinth. There lurks the monster, part human, part beast. It is a creature who can imagine and reason, but who is controlled by bestial instincts and desires. The Minotaur in Classical legend must be appeased by human sacrifice. Only its defeat and death can lift the power it holds over humanity.

This myth of course can be read in a number of ways. The meaning is not obvious, intentionally so because it is for us, even these many centuries later, to discover for ourselves a way out of the labyrinth. It may be an appropriate way to us and to no others.

The end in view may be a defeat of the lower part of human nature, the animal instinct. Visceral desires need the tempering of reason. When desire overtakes restraining influences there is violence and chaos within the mind and within the world. Recognition of the beast within the human heart is the means by which words (and the thoughts and impulses behind them) can be distilled to their crystalline essence. All incident and trivia can be dissolved by the invocation of the prophetic and the poetic. That is the ‘purer sense’ of which Mallarmé wrote.

It is with that sense we go down into the labyrinth. The trail we follow is a slender thread. So slowly we follow his uncertain and possibly treacherous guide. What we follow may be misleading, though we know it is not.