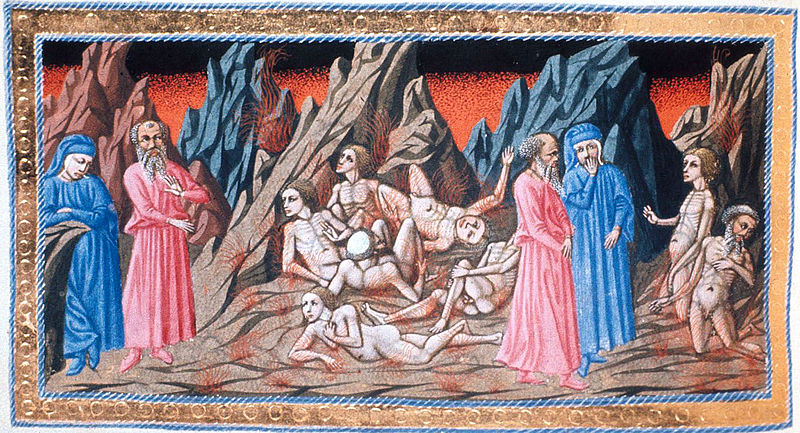 In the eighth circle of his Inferno (the Malebolge), Dante places the sinners that committed fraud in life. It consists of 10 bolge (roughly translated as “ditches”) each containing a mob of tortured souls.
So it is that in the eighth bolgia we find the classic hero Ulysses, bound to lament (alongside with Diomedes) the ambush of the horse that saw the fall of Troy –whence issued forth the Roman´s gentle seed.
Dante can barely contain his desire to speak to the Greeks, and so it is that Ulysses refers his final voyage to western seas, and his death upon witnessing the mountain of Purgatory.

Dear old Ulysses,
that went away to seek new worlds and found the wrath of Providence,

Many sing your living tale –of battles, seas and giant´s rage,
Of wits and noble deeds that earthly glory sought,
Of ardent passion not to yield, to see the southern pole,
To follow knowledge to the edge, meet every peak or shore.

Once, your bright eyes seized the stars–
Those burning stars that gazed upon the flames of Ilion.
The stars, though still the same, proud Troy they see no more,
And bound to Hell your eyes will burn for stars forever lost:

You ventured to the seas that lay beyond the sun;
You sought such things yet un-revealed to Man,
Knew not of faith, knew not of Nature´s bounds,
Knew not in silent nights to humbly read the singing stars.

Your isle gentle stroke, the longing repose
from roaring plains, risky seas and raging oars…
Were you not content to honor the household gods?
To guide your people with the scepter and the sword?

To plant virtue by the law and tend upon the simple goods?
To be a father, to be a son, and devote yourself to a loving wife?
The still hearth burns a gracious flame, the empty day wanes away;
But on your mind weighs the strife of wasted life,

Of old age, of lost days, of boundless worlds untamed.
“The warmth of sea awaits”, you claim, “be it Death
or something else; but let us cruise the path of fame –
idle poets’ songs someday, when we be nothing but a name”.

The humble rocks of your proud isle weight upon the stern,
The winds of Ithaca bid you farewell. Behind your land
Rises the sun, the sail breathes the morning air:
Waters serene welcome the old vessel like an old friend fair.

Eyes fixed on western seas and the world beyond,
You and your mariners abandoned waters known:
No more happy coasts embraced the drifting boat:
Dips the prow, trembles and leers, the wide horizon ever-near.

Every day, upon the left, the very first light: it climbed
the skies, it shone so bright, and came to die in western lines.
And every day, upon the right, a vision did arise:
That you shall set foot on the land beyond the dying sun.

Many faces of the moon counted the eager mariners,
Many miseries unsaid, many yearnings to return.
And every night the silent crew laid over port side
As stars unknown climbed above the dark and sleeping sky.

There is no center in the sea, the ever moving sea,
No place to walk, no form, no home, for the old mariners.
But still the west winds sang the songs that dazzled fickle hearts,
Sweet songs, Ulysses, whispered once by sirens from Greek lands.

Across the silent face of sea, the silver ship did cruise.
Old and slow the mariners, embraced by drifting waters,
Fight the light, the storms, the waves, fight the thirst
And fight their age. No cries of land reached their weary ears.

Every day, upon the left, the very first light: it climbed
the skies, it shone so bright, and came to die in western lines.
But only once, beneath the skies, a vision did arise:
The southern Mountain ever-bathed by the loving Sun.

To gaze upon the land of God being mere mortal man;
To hear not the boundless stars; to cruise the surging waves
And wield the wildest winds, adrift in margins ever ahead…
Not death, but faith closes all.

Thus, joyous eyes–that walked already virgin lands–
Turned to stern in wild surmise, for out of rough seas
A whirlwind rose and wielded the prow of the wretched boat.
Wept the skies when waters closed over Odysseus and his lot.

Why doesn’t he say anything?