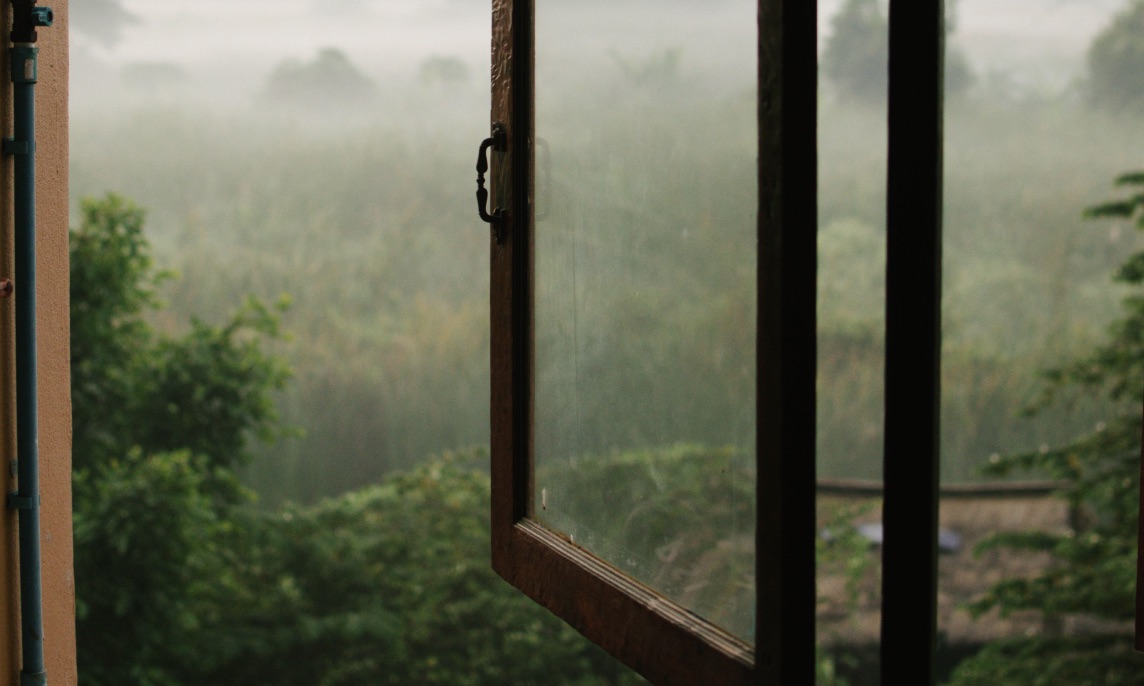 He stood alone out in the field. The wind was heavy, hitting him in waves, and creating in his ears the sounds of distant crashes and roars – muffled by the space between him and them that either lessened or grew as time went on. He wasn’t sure. But he knew that he stood, and looking out across the field he saw movement. First slowly, and then suddenly the scene began to change – first the horses running forwards, driving across the plains and against the horizon. It dawned on him how heavy they must have been then, the raw force of their hooves hitting the floor of the field and digging into the earth, imprinting it with a mark. As they moved across the scene he saw how they left a trace behind them, not just in the earth but also in the air. He could trace the pattern of where they had been, could have followed it to find whatever open place it was they had come from.

And then the people came into view. He could see them across the field, walking slowly. He tried to make out their faces or count how many of them there were but he couldn’t, couldn’t quite see from where he was standing. They moved in time, stepping as one, falling forwards in a single rhythm. And just as suddenly as they appeared they began to shrink out of view. They made no noise – not a sound. And so he was alone again, standing in the field with the cries of a distant ocean ringing in his ears.

In the house things were silent. He looked out the window, thinking of something to say. How to start a conversation, how to speak in the presence of a stranger in such a way that they understand what it is that you mean. There was something to be told, a story – the movements of his life, organised in a vague fashion. But he was too old for that now, couldn’t do it alone. As much as he would’ve liked to – couldn’t be alone.

The old garden was barely recognisable now. It had been twenty-three years since he bought the house. That space – the one out there just beyond the clouded glass – had once been a source of pride. Now it was a headstone to that part of his life that had been drowned. But he had always felt detached from the house itself, from the walls that towered over him still. He didn’t know why. There was nothing in it that he saw himself in, no significant history or memory attached to any of it. Old furniture and possessions filled the vacant rooms, had been a part of his life for decades – longer than most of the people he had known. But when he thought of them all, all those tables and chairs and cabinets filled with things that escaped his memory, the remote feeling that there was something missing returned to him. Not a void that could be filled with a new purchase or the re-tracing of old memories, those fleeting images, but something less easy to name.

“If there was ever a fire,” the old man said. “If there was ever a fire and I – for whatever reason – wasn’t here, and if the flames engulfed the house, and nothing was left behind, and the lot was empty again, I don’t think I would mind. I wouldn’t want it – wouldn’t ask for it. But I wouldn’t mind. In many ways it would be,” he paused again. “In many ways it would be a kind of purification. Something new could – would almost definitely, I suppose, take its place.”

The boy was sat in a wooden chair in the corner of the room. He met the old man’s gaze but there was a hazy look in his eyes, a tiredness. He sat still, waiting for something, and then began to write on a sheet of paper.

“And I,” the old man continued, “and I would… not sure. Wouldn’t come back. Might not. Not now – not once the place is gone. I mean that as a –” he paused once more, then spoke in a voice smaller, quieter than before. “Neutral statement.” Looked out the window again at the garden, tried to summon a feeling. Might’ve felt something if the garden had flooded, or if there was a drought. All those years spent working on it are gone now, yes, and they cannot come back – yes. But they happened, certainly happened – without a doubt. There must’ve been something within him that felt connected to this place, no matter how hard it was for him to access it. But even then – he thought – even then, after all this, after the fires and floods and droughts, they would look at the garden and he would be nowhere to be found. No sign of him at all. They say the home holds the sighs of a hundred voiceless ancestors, and yet here he was, hearing nothing and speaking only for himself, an aged man.

The days spent in the city were hot and suffocating. When he was young he never noticed it, just kept on moving, too caught up in himself to take note of his world – their world. They had always moved together, in a group. Wanted to rally against the shortness of the day with all of their might, the few friends that he had, but in the end they knew they would always have to lose. Back then he thought he wanted to do something. They all did – it was part of their bond, pursuing action and ignoring all else. And all those rattling questions about being something never meant anything to any of them –too hung up on what was left to be done. There was always time to be. It never occurred to them that they would ever run out of time to be.

All he wanted was to leave a trace.

“Walking down the paths and alleyways,” he said to the boy, “that was all I ever thought about. What was left of things – conversations I once had but now struggle to remember. Spending hours with others, speaking the whole time and remembering none of it. It all ran off me and there was nothing to cling on to. And they thought… well, I don’t know what they thought of me. But I thought it would be easy. I look back at the boy I was and barely see myself in him, not in any of the things he said or thought or did – whatever beliefs he held. What did I used to say – it all escapes me now. That’s probably for the better. But sometimes, in certain lights, I can see the seed of how things would turn out within him. A kind of vague outline.” He paused. “Are you….”

The boy continued to write, hadn’t stopped. Flipped the sheet of paper over to scrawl on the other side. His face was expressionless. “No – good. I’m glad you’re recording this,” the old man said. “I’m so glad to have you here. All the time we were together I felt as though I was doing something important – was in the company of people who believed what I myself believed in, whatever it was, and there was no greater feeling that that.”

As he cast his mind out to that distant and lonely place, an image flashed up behind his eyes. He was unable to ignore it; it lingered for no longer than half a second. But that was all it took for him to be drawn into what it held, pulled helplessly towards this one image, a fraction of a life that now arose before him in a colourless daze, a sad dance. “There’s this thing,” the old man began to say, and then stopped. He looked somewhere in the floor, his mouth hanging slightly open. The boy still wrote, didn’t try to meet his gaze, lifeless all but for the movements of his arm. Sitting back, not waiting for the man to put into words the thoughts that had engulfed him.

“There are things my father used to tell me.”

Staring into space, looking across the field. He could see them there. They were riding bicycles. His father and a friend, just kids, cycling through the winding valleys in the north of the town, near the mountains. He knew that one day, on a day just like this, they would meet him there. They would’ve been there now if he could reach them. And the sounds of a rolling ocean came flooding back to him.

The rain was heavy, lashed off the windows of pulled-up cars and lonely houses. It was the shortest day of the year. The northern hills rolled over one another, breaking the flatness of the land in peaks and flowing forwards. Up here the two of them had cast themselves apart from a heaviness that, as hard as they tried, they could never name. But here it meant nothing to them. Hardly a word fell between them, the rest was silence. Those were sacred days, traversing the paths laid out before them with the quiet desire of a thousand rotating suns. Tell them there is something more than this. They cannot listen.

Laid out against a rock one evening, looking out towards the last embers of a faltering day, a wave of sadness overcame the boy who would someday become the old man’s father. He looked towards his friend, knew that this was it. Whatever it was that people passing by said about life, it was this. Only those days in the mountains would ever amount to anything.

These memories were quiet and full of life, but also loud, sad, crying out from the back of his mind with a whimper, or howling. The old man had remembered them as if they were his own. A part of him wished they were – he had taken them as such. And now he told them to the boy. But the boy knew the truth – of course he did – he, too, was a part of him. But the house was not. This life, though it had its moments, was not. An empty gesture for the most part. Something like a shrug.

He closed his eyes once more, knew the boy had gone now, taken into the dark – closed up in the folds of the room along with the empty chair.

In the field none of this matters. The roars of the ocean cannot be traced – you cannot follow the sound. He hums a tune to himself as he stands and looks out across the rolling plains, so vast and unending. He hums because he cannot think of the words. The horses have long since gone now, but the ground remembers they were there. If he stands still long enough then the grass might remember him, just like it remembers them. It begins to rain.

The ocean moves. There is static in the air. And the others, the people have gone, but if you listen quietly you might be able to hear their cheers in the distance. They are celebrating something but it is unknown to you. It is unknown to him too.

Ted J. Gibbs is a Brighton-born writer currently living and working in London, where he has recently completed his final year of undergraduate study at King's College London. When he is not studying or writing, he can be found walking on Hampstead Heath or reading.

On Poetic Natures - In Conversation with Juan Arabia

There Are Certain Verses