The appy polly loggy of a droog
|
Vasiliki Poula 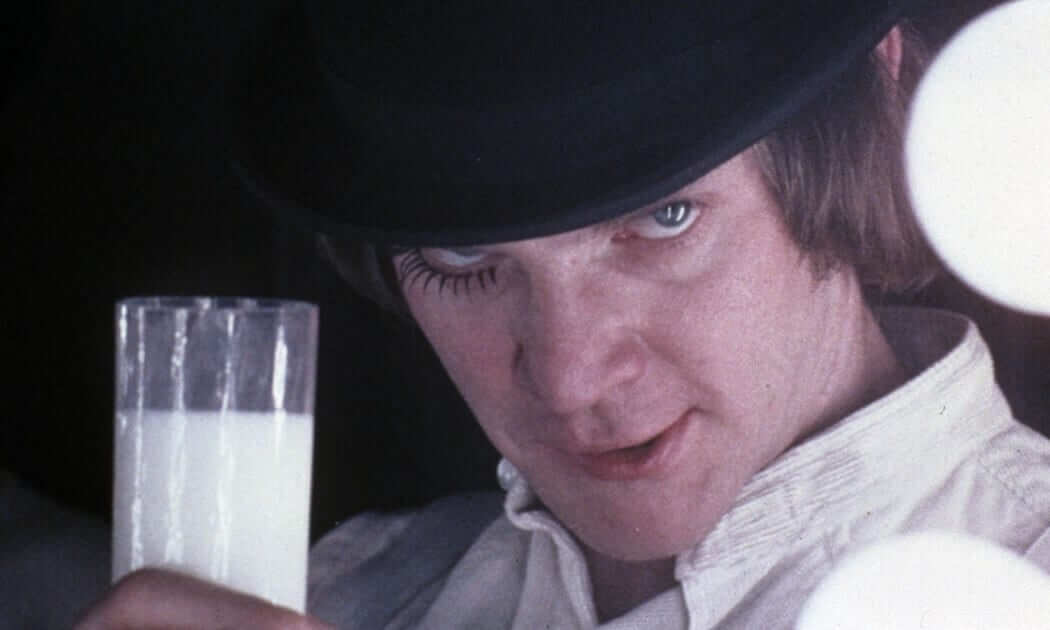 The appy polly loggy of a droog

How you have felt, O my brothers, at hearing the goloss of my accusers, I cannot tell; but I know that they made my tongue stuck and almost forgot who I was. Then, it came. I shall just tell you the facts, as they happened. Oh, bliss, bliss and heaven after this idea.

There was me, that is Alex, and my three droogs, that is Pete, Georgie, and Dim, Dim being really dim, and we sat in the Korova Milkbar making up rassoodocks what to do with the evening, a flip dark chill winter bastard though dry. The Korova Milkbar was a milk-plus mesto, and you may have forgotten what these mestos were like, things changing so skorry these days, and everybody very quick to forget, newspapers not being read much neither.

We found Billyboy and his droogs and punched and nudged. Of the four of us Dim, as usual, came out the worst in point of looks, that is to say his litso was all bloodied and his platties a dirty mess, but the others of us were till cool and whole. It was stinking fatty Billyboy I wanted not and there I was dancing about with my britva like I might be a barber on board a ship on a very rough sea, trying to get in at him with a few fair slashes on his unclean oily litso. He had a nosh, a long flick-type, but he was a malenky bit too slow and heavy in his movements to vred anyone really bad.

And my brothers, it was really satisfaction to me to waltz – left two three, right two three – and carve left cheeky and right cheeky, so that like two curtains of blood seemed to pour out at the same time, one on either side of his fat filthy oily snout in the winter starlight. Down this blookd poured in like red curtains, but you could viddy Billyboy felt not a thing, and he went lumbering on like a filthy fatty bear, poking at me with his nozh. I got bored and left, smiling very wide and droogie. Still the night was very young and we took off.

We played an act, that Dim would faint and I would go the next house, and in a very refined manner of speech, a real gentlemenan’s goloss would ask to use the telephone to telephone for an ambulance. “We do not have one”, said this devotchka, though. I then asked for a cup of water. She hesitated, but went in to bring it. And my three droogs put their masks on, I put mine, too and went roaring in, old Dim playing the shoot as usual with his jumping up and down and singing out dirty slovos, and it was a nice cottage, I’ll give them that. On a table, a typewriter and all papers, scattered everywhere, but there was one little pile of paper like that must have been what he had already typed, so here was another intelligent bookman type, a writer. His rookers were trembling and so I said: “Never fear. If fear thou has in thy heart, o brother, pray banish it forthwith.”.

Farewell to the writer and his lady, I should not take up your time. I was in such bliss, my brothers. The next morning I woke up at eight and as I still felt shagged and fagged and fashed and bashed and my glazzies were stuck together real horrorshow with sleepglue, I thought I would not go to school. And did not go, but because Mr. Deltoid there came and took me. The cat-lady was dead and I was a murderer.

The jury finds the droog guilty.

The droog’s proposal for his sentence

I bet you think that's pretty clever don't you, sir? You needn't take it any further, sir. I expected it, and am only surprised that the votes are so nearly equal. You've proved to me that all this ultraviolence and killing is wrong, wrong, and terribly wrong. I've learned me lesson, sir. I've seen now what I've never seen before. I'm cured! Praise Bog! I'm cured! I am cured, alright?

Anything, anything, but the clockwork orange. That’s a fair gloopy title. Who ever heard of a clockwork orange? Then I read a malenky bit out loud in a sort of very high preaching goloss: ‘The attempt to impose upon man, a creature of growth and capable of sweetness, to ooze juicily at the last round the bearded lips of God, to attempt to impose, I say, laws and conditions appropriate to a mechanical creation, against this I raise my swordpen.’

If man can only perform good or only perform evil, then he is a clockwork orange, he has the appearance of an organism lovely with colour and juice but is in fact only a clockwork toy to be wound up by God or the Devil. Well then, if you let that orange be the penalty, not even that would be of ample security to you.

Because I know what I have to do, and what I want to do, and that was to do myself in; to snuff it, to blast off for ever out of this wicked, cruel world. One moment of pain perhaps and, then, sleep forever, and ever and ever. But where I itty now, O my brothers, is all on my oddy knocky, where you cannot go. Tomorrow is all like sweet flowers and the turning vonny earth and the stars and the old Luna up there and all that cal.

The jury condemns the droog to the clockwork orange

The droog’s comments on his sentence

Oh well, my own healthy inheritance of original sin comes out and I enjoy raping and ripping by proxy. To devastate is easier and more spectacular than to create. What I need now, to give the perfect ending, is a little of the Ludwig Van. And I would always need it. Oh it is gorgeousness and gorgeosity made flesh. I lay all nagoy to the ceiling, my gulliver on my rookers on the pillow, glazzies closed, rot open in bliss, slooshying the sluice of lovely sounds. Yumyumyum. The trombones crunch redgold under my bed, and behind my gulliver the trumpets three-wise silverflamed, and there by the door the timps rolling through my guts and out again crunched like candy thunder. A wonder of wonders.

And then, a bird of like rarest spun heavenmetal, or like silvery wine flowing in a spaceship, gravity all nonsense now, comes the violin solo above all the other strings, and those strings are like a cage of silk round my bed. Then flute and oboe bored, like worms of like platinum, into the thick thick toffee gold and silver. When it comes to the Scherzo I could viddy myself very clear running and running on like the very light and mysterious nogas, carving the whole litso of the creeching world with my cut-throat britva.

But now it is time to go away. Which of us goes to a better thing is unclear to everyone except to dear God. You have been everywhere with your little droog Alex, suffering with him, and you have viddied some of the most grahzny bratchnies old Bog ever made, all on to your old droog Alex. And all it was was that I was young. But now as I end this story, brothers, I am not young, not no longer, oh no. Alex like groweth up, oh yes.

The appy polly loggy of a droog

How to be naïve