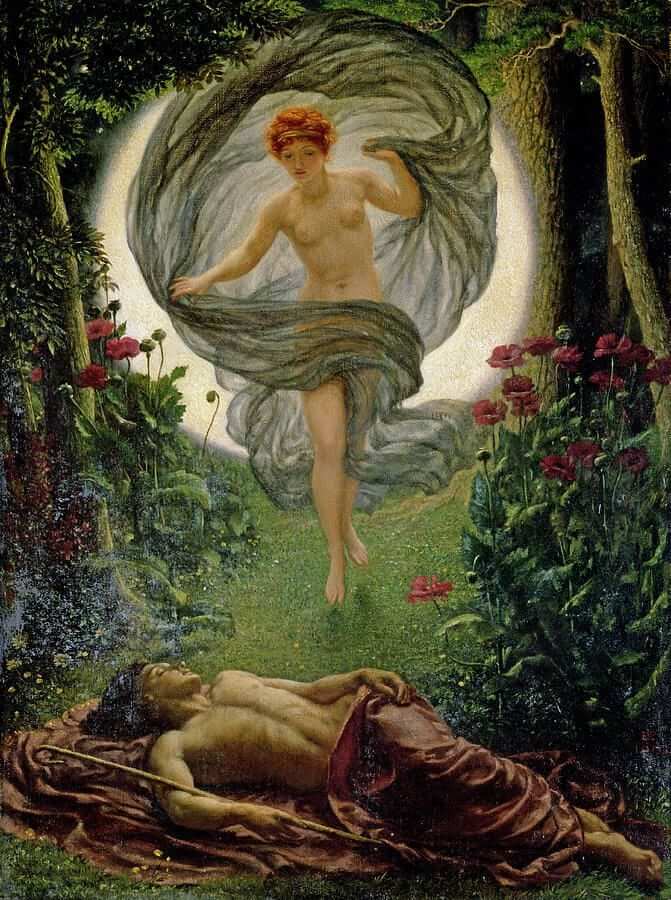 An experiment in rewriting the myth of Actaeon sans thorns

The goddess bathed in the twilight, in the radiance of the moon she was meant to protect, and it was in this light that Actaeon found her, lying idle in a stream. Far from her brother’s prying eyes, and denuded from duty and responsibility, the goddess gave herself to love, and together Actaeon and Artemis roamed – hunting, eating and bathing, always in the night.

In the years that passed the lovers’ passion grew, and as they spent the nights in warm embrace, the moon would inch its way across the sky, devoid of any protection. At first, none dared impede upon the goddess’ domain, but soon enough, the sky and clouds began to test their limits, first obscuring small portions of the moon, and then masking it in its entirety – casting great shadows onto the earth.

But rapture provides its own illumination, and the lovers would hunt and play in the darkness, unaware of the movements of the deities above. But Actaeon was a mere mortal, and as mortals are wont to do, on one dark evening like any other, he stumbled and fell, striking his head upon a stone.

The blow proved fatal, and before Artemis had time to turn and gasp, all life had left his eyes, a weary, flimsy corpse, strewn across the ground. Alone did she grieve in the darkness, cursing the clouds and the sky and the moon for their betrayal. But deep down she knew the truth: it was her complacency that had caused this.

Casting her gaze to the heavens she decried: Actaeon, my love. I can grant you no honours. Your breath is long-gone, so immortal, you cannot be. The land of the dead belongs to my uncle, and to visit you, he shall not permit. And the stars… the stars shine too faintly and too far for me to see. I need you close to me, where your whispers and your touch can reach me.

Thus did she kneel, spreading his drying blood across the cyclamens below, and whispering: These flowers shall bear your name and memory. May they grow in number and vigour and accompany me on my hunts for all time to come.

And grow they did, shining a bright scarlet under the full-moons, and throbbing a deep crimson in the darkness, an eternal reminder of her pain.

The Testimony of a Resurrection