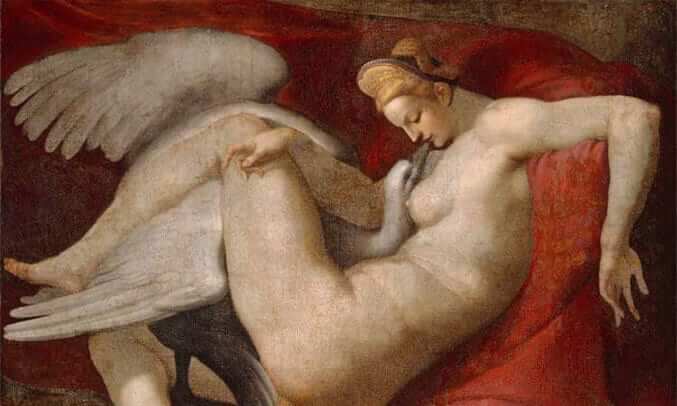 Leda and the Swan
By W.B. Yeats

A sudden blow: the great wings beating still
Above the staggering girl, her thighs caressed
By the dark webs, her nape caught in his bill,
He holds her helpless breast upon his breast.

How can those terrified vague fingers push
The feathered glory from her loosening thighs?
And how can body, laid in that white rush,
But feel the strange heart beating where it lies?

A shudder in the loins engenders there
The broken wall, the burning roof and tower
And Agamemnon dead.
Being so caught up,
So mastered by the brute blood of the air,
Did she put on his knowledge with his power
Before the indifferent beak could let her drop?

Leda and Zeus
By Kimon
It bit, and it cried, and it bit again,
Blood dripping from its beak

The girl lay beneath it,
Clothes in tatters
Eyes wild with fear

This time it charged at her breasts
Gnawing as she shrieked…

Perhaps it was some solace that she took it only for a bird
That insanity was the tribute of depravity
Madness, determined by its affinity to pain
Perhaps it was best that she did not see those black beady eyes
As they feasted on her shredded flesh
That she could not fathom what hid beneath
A power much crueller and harsher
Than that beak, or those talons, could ever be