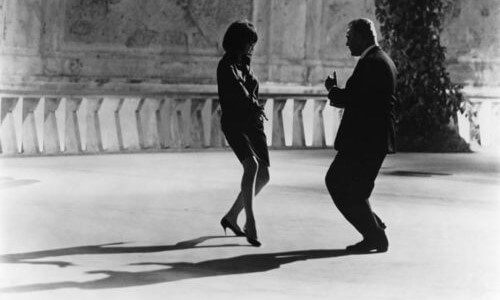 By the time Fellini was working on 8 ½, he couldn’t decide what the protagonist did for a living: “I felt myself blundering, I was on the brink of abandoning the project.” Such pressure may have provided useful material for him to shape his film.

Fellini was a vivid dreamer: he slept and dreamed, and sketched the scenes he pictured. When he was out of ideas, he improvised cartoons, which despite      the superficiality with which they were drawn, ended up being the representation of his deepest thoughts. In dreams Fellini found motives that explained his state of mind, and it is observable how he tried to be true to those sketches: he believed in the truth of dreams. There he could find the graphic justifications of  his sensations and emotions.

He may have felt, say, a pain in the stomach, of stress and concern over a whole production that had been entrusted to him, and in dreams, this pain could created specific emotions with similar expressions. This way, the shame for being an acclaimed director translates into the opening sequence in which Guido is stuck in a traffic jam, not going forward or backwards, and where everyone around him stares at his faceless man: the celebrity, an apparent figure. Such harassment may have caused him to experience some sort of smothering, translated into the sense of suffocation that forced him to escape the car through the window. His stomachache may have been turned into a fear of heights, shown at the end of the same sequence.

His images were sketched immediately after he dreamed them, a habit from      his childhood days. If not, he would draw what his memory picked up from years earlier. I can’t supply specific information about the date and circumstances of Fellini’s nightmares since the drawings are very difficult access, but I have seen some frames that appear in 8 ½ previously drawn by his hand as cartoons; those two named above, the character of Saraghina and her presence at the beaches, a woman climbing up the stairs of the harem... The Saraghina, for instance, was a childhood memory that obsessed him, and in his reconstruction and casual dreams about her, he affected the appearance and attitude into that sort of giant circus woman whom we finally meet in the film.

In the same interview in which Fellini expresses his fear, he tells us how he came up with the idea of 8 ½: “the simple fact that I couldn’t face telling my loyal troupe that I was about to abandon a film whose subject I knew nothing of revealed my subject to me: a director who no longer knows what film he wants to make.” Between his creative drought and his new idea for the script, I don’t find it impossible for Fellini to dream those scenes that appear almost exactly framed, at the beginning of the film.

Therefore, the film has two seeming starting points for creation: the director’s dreams and the director’s personal life. Both sources are reflected in the film as subject and inspiration for the main character: Guido, a director who doesn’t know what film he is going to make.

And being the story a mirroring of his own self, Fellini does not divide his life into dreams/real life; he does not work these two areas of experience in different manner, but mixes them up in structure and, most importantly, in form. When it seems that the sequence belongs neither to Guido’s dream nor his hallucination, the dreamy sensation appears: a lack of plausibility in the sounds; unusual behaviors and ridiculous looks; a lack of spatial concordance, caused by cutting music abruptly, or suppressing the sound, or making the mouth movements not match the dialogue; the circus-like choreographic movements of characters; the camera’s unpredictability, which makes characters and space appear as it pans, thus suggesting it is not being handled by a human hand, but is floating  with the airiness of dreams. Look at Claudia Cardinale’s first entrance, for instance.

It is said that the film seems empty, and that may be true from a structural point of view. No plot, we may say, but we would not be discovering anything; Fellini would agree, since he is the first to admit it. There is nothing in Guido’s project. We know it is something about a spaceship, some old characters, at least sixty years old, a French actress… but apart from the participation of those elements and some more, the film does not exist.

But showing his character incapable of justifying his work is not Fellini’s way of being humble, but rather he is pointing out something more important which is: that which he is, is his style. Fellini is showing himself as an artist working on a film, thinking the film, trying to do it. And we may be many things, but the artistic angle is defined by style; the rest is cloth that can be cut away. Style reveals the artist like the step revealing the Goddess; Virgil’s vera incessu patuit dea is Fellini’s Guido humming and dancing while he walks down the corridor.

His cinematographic self-portrait has, then, almost no plot and no real conflict, the same way a portrait has no story line or time. And it is such the belief of this precept that at the end of the film he reduces all in a pretty rough way: when both Guido’s and Fellini’s films end, which logically they do at the same moment, we are supposedly upon a finished production, a picture soon to be shown to the world. At this moment the film folds to itself and the final mirroring passed film/incoming film takes place, and we realize that Fellini wasn’t going to say anything, and it was all about the fun.