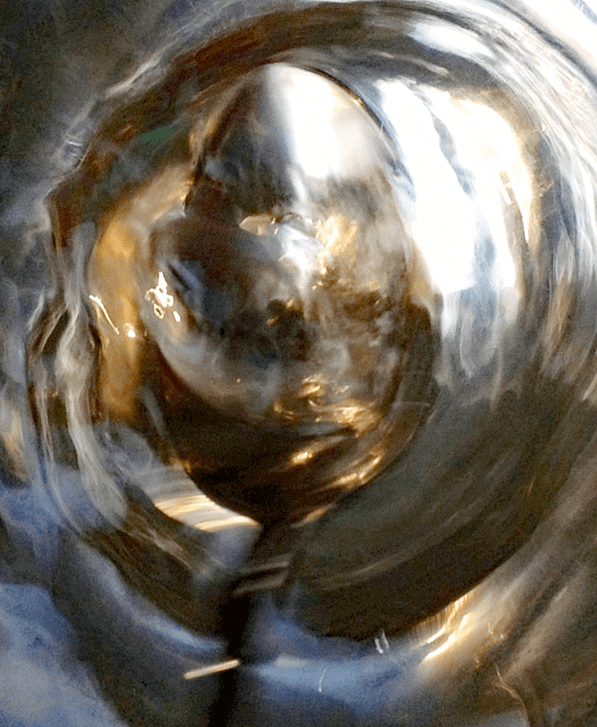 Faces are appearing again. On the ceiling. During a power outage, as she lies on the bed. Before, it was during an ice storm, in winter. Now, it is during a heatwave, when heatwaves threaten to never break but instead swell and gather over vast spaces of time. She lies remembering, the faint notes of a song coiling in her inner ear.

She must have drifted off to sleep. Now, she has not yet awakened; is, instead, somewhere-in-between. Rapidly morphing figures form on the insides of her closed lids. She is conscious of deliberately keeping her eyes shut to preserve the figures a few seconds longer … in case they hold clues to the mystery behind mundanity or to mundanity itself—to the adverse miracle of breath. She exhales, letting go of tension but not without first noticing that the figures, letters, that float under her lids look like contortionists. She follows them until she falls asleep again … plunging headlong into a dream.

On the shortwave through the eye of water, something is coming in from the west by northwest, from Louisville, Kentucky—invisible light, made visible, caught in the receiving dish of vertiginous currents swirling counterclockwise. A brown horse, black mane, and the head of a man with a face paler than the horse and a black mustache and a monocular bubble floating over his eyes, disguising his identity. The horse’s turned head eyes, not a headless rider, but a bodiless one. His master? Or a jockey? Or a racetrack spy? A spy who sees what? A dark horse candidate? The fixers who plan the terror, the boxing in and forced crash on the racetrack? The tumble that lames a horse for life or breaks its legs? The jockey hanging upside down in space, stomach exposed, like a washboard, to the light? Or the drug that disguises evidence of pain and was used to disqualify the winner?

Less than a century earlier, Lincoln sits atop his future monument about to issue the Emancipation Proclamation, an alchemist in a stovepipe hat with a potion whose effects remain to be seen … an elixir atop a boiling cauldron. What does become apparent is that the black jockeys remain some of the best in the country. They win the majority of the Kentucky Derbies for the first thirty years until the Jim Crow segregation of Reconstruction and the Progressive Era blanche the tracks of their presence by the early 1920s.

What is freedom without opportunity? The dreamer shifts on the bed, turns on her side, Lincoln still before her … so still, so quiet. She wonders how he can sit without moving, a spectator at a farcical comedy or a prisoner in an electric chair before the executioner flips the switch. Something perches on his shoulder. An eagle as yellow as its own eyes? A tornado funnel descending from a stormy sky?

As if from behind a scrim, as if in a daguerreotype, a young man looks out questioningly. What day is this? And, where is he? He is here. But, where is here? And, from where is he coming? From Lexington, Kentucky where he died? From May 1875, twelve years after the Emancipation Proclamation? The day Oliver Lewis and his horse, Aristides, won the first Kentucky Derby, pulling two lengths ahead near the finish line in front of ten thousand spectators? Then, there had been the roar of the wind and the roar from the stands; now, only the rise and fall of cicadas in the heat and the interior of a darkened room like the obscurity he remembers upon retiring from the dangerous sport, for unknown reasons, after that first shining season of gleaming trophies. And, in the U.S. from 1921 to 2000, black jockeys were “retired” from horse racing by systematic racism.


The dreamer stirs, rises from the depths of her slumber toward her momentary 3:00 A.M. waking, sits up in bed, swings her legs to the floor, reaches for her glass of water on the night table, takes three swallows, and lies back down again, on her back this time, pulling a sleep mask firmly over her eyes to descend into a deeper darkness for the remainder of the night. Head cushioned on her pillow and absolute darkness beyond her lids, she sinks, like a deep-sea diver, into another realm.

A door opens in the unguent darkness. She becomes aware of a snow-white goat—or is it a lamb?—staring at her with … large, pale, kind, and slightly mischievous eyes. She stares back in wonder. It takes her a minute to see that the goat is not alone. It seems to her that it is accompanied by a man with a face borrowed from a classical bust and a woman in a black top hat, one eye visible and the other covered by her cascading hair. Past the man’s face, that of a prize fighter knocked on the bridge of the nose or of a big cat, perhaps St. Mark’s lion, strolls, half-camouflaged, something winged. The woman in the top hat seems to be smiling at that or at the words the dreamer hears pass between her and the man: “You’re never safe until you’re with the angels.”

The dreamer notices little tongues of flames above their heads, red and orange and gold, like the curtains and the decorative motifs of the theater where they are seated, a theater from 1906 that had once been a church where, later, people had come to watch “photo plays with concert organ” and now art house films. The dreamer feels herself to be with them in this church-turned-movie-theater, a theater with nine lives into which she has trudged from a snowy evening around Coolidge Corner, Brookline, MA. just in time to hear the woman in the top hat observe, “Happy to be home.”

And then the movie theater’s red curtains part to reveal another set of curtains, a waterfall arching like a rainbow, from behind which steps, smiling, the first black opera singer to debut at the Metropolitan Opera House in New York. The date: 7 of January 1955. The part: The “negro” medium in Verdi’s 1859 opera Un ballo in maschera (A Masked Ball). This part is based on a historical figure from the court of King Gustav III of Sweden, an eighteenth century patron of the arts. But, Verdi does not set his opera in Sweden in the eighteenth century, but, instead, in Boston, Massachusetts where the medium fortune-tells in a role similar to that of Reverend Parris’s Barbadian slave, Tituba, in Arthur Miller’s 1953 play The Crucible about the 1692–1693 Salem witch trials as prefiguring Joseph McCarthy’s 1950s persecution of those seeking to create a more inclusive society. The dreamer hears the singer whisper about that evening, “I was there on stage, mixing the witch’s brew.” And, this time the D.A.R. does not bar her from singing as they did in 1939, from Constitution Hall in Washington, DC. The man with the prize fighter face winks at the woman in the top hat; they share the memory balm of the singer’s divine aria soaring upwards. The dreamer swears she sees a white ibis hovering beside the opera singer, like the kind that often accompany the wild Spanish horses on the Southern barrier islands. And, furthermore, she spots a sturdy ram with one watchful eye and nearly human lips lower down beside the singer whose arm passes lovingly behind its head. The ram looks calm, alert, and knowing—a bodyguard, a willing sacrifice.

The remotely viewed performance has ended and the red curtain closes, covering the silvery screen. The woman in the top hat and the big cat prize fighter get up to leave the theater. The dreamer’s heart skips a beat. She must not lose sight of them! She follows them out of the theater into the cold winter night of distant stars. They walk several blocks and climb into a Meteor hearse. The dreamer hurries close upon their heels, quietly slipping into the hearse’s second row of seats. Three car doors synchronize shut.

Not very long after, the hearse is rolling across the Mystic River Bridge, northbound toward Route 1 North before the lane closures and the frantic bridge work on “The Tobin Bridge” rotting in the sea air. Emerging from tunnels and high walls, the dreamer catches glimpses of dark waters glinting far beneath. She has cracked a window. The cold night air whistles in as the car rhythmically rises and dips across the segmented asphalt. She tastes the salty sea air on her lips. She inhales, filling her lungs with a long, deep draught. Her heart is pounding, unbridled horse on a road at night. Suddenly, it seems to her that someone is seated beside her—a phosphorescent woman looking out into the night at a pale horse galloping faster than the hearse itself. And, in the next moment, the woman in the top hat seated in the passenger seat beside the big cat prize fighter who is driving, his tawny hands on a wide wood wheel, turns around with a glimmer in her eye and inquires, “What time is it your time?”

María DeGuzmán is a scholar, conceptual photographer, creative writer, and music composer / sound designer. Her photography has been displayed in galleries (e.g., the ICA in Boston and the Golden Belt Studios in Durham, NC, USA) and in literary journals and on the covers of academic books and books of poetry. She has published a creative nonfiction essay in Callaloo; a creative nonfiction photo-text piece in Oyster River Pages; photography in the North Carolina Literary Review, The Grief Diaries, Coffin Bell, Typehouse Literary Magazine, Map Literary, Two Hawks Quarterly, Harbor Review, and The Halcyone as well as Alluvian (forthcoming); poetry in Empty Mirror; and short stories in Mandorla: New Writing from the Americas, Huizache: The Magazine of Latino Literature, Sinister Wisdom, and Obelus Journal. Her Soundcloud site may be found at: https://soundcloud.com/mariadeguzman.