A Refutation of the Road
|
Asa Murphy 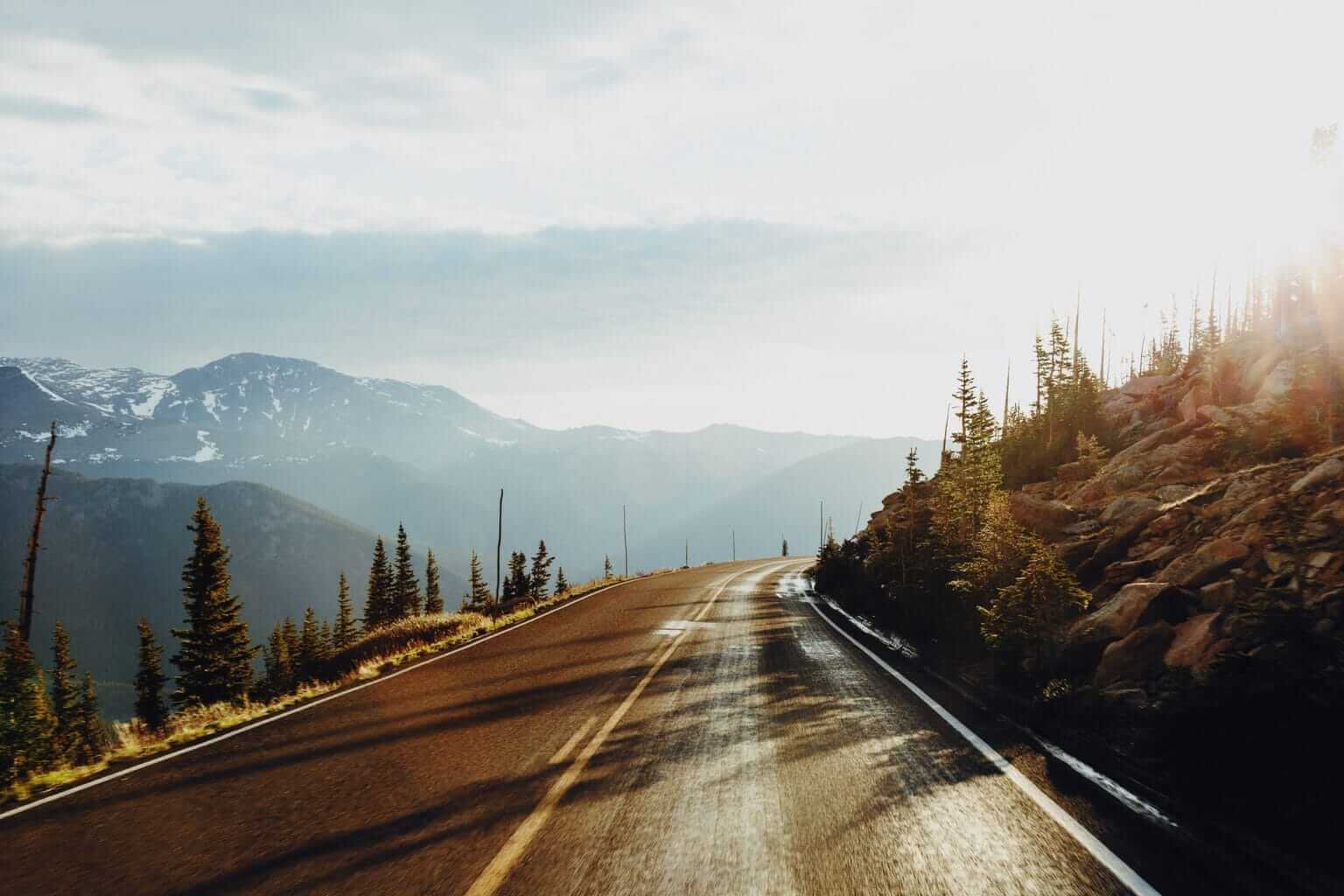 I have never, not once in my adult years, been on the road. I have left the house, you understand. I have driven and been driven to schools and offices, weddings and anniversaries, christenings and, lately, a funeral too. I have nothing against the occasional change in scenery, nor do I feel attached to a single place; in the past ten years, I have moved six times. But I have not, and will not, be on the road.

It’s not the roadstead I object to, the access way, the thoroughfare. I cannot summon a concrete argument against a highway’s metal skeleton, its slathering of asphalt, its on-ramps and off-ramps. What I am talking about here is not any road and not the road as surface term; what I am talking about is this nation’s pilgrim legacy, an obsession that still bears the stamp of Lewis and Clark, a longing as American as Super Bowl Sunday. It is Sullivan’s Cross Country, it is Steinbeck’s Travels with Charley, it is Kerouac’s road I’m talking about:

‘“Sal, we gotta go and never stop going 'till we get there.

Where we going, man?

I recorded the first entry in my notebook of road refusal when I was eight. It was during a road trip my father initiated with great fanfare in Greece, a Homeric adventure we were to undertake for the sake of travel and absent of destination, a wandering of the mainland; our vessel an old Citroën that smelled of burnt diesel. My father’s enthusiasm managed to pack two families in that car: four of us, including my sister, and three on my aunt’s side. My mother spread herself in the passenger seat, Father took the wheel, and five of us squeezed in the back. I argued against sitting in the middle, or worse, on my aunt’s lap, and my wish was granted. The trip’s highlight occurred when my father, in dire need of a bathroom, and having lost hope of a rest stop in a countryside marked by stretches of dry bush and rock, finally brought us to a halt in front of a country house with a crumbling wall, ran outside holding his belt, and banged on the door as if he were about to pillage and ransack the place. The shrunken, older woman in a black headscarf who appeared in the doorway, looked up at him wide-eyed.

What happened once back on the road deserves closer attention. It could have been carelessness on our part—everyone was getting tired and grumpy by then—or it could have been that particular car’s idiosyncrasy: it was during a tight right turn, my head leaning against the window, lulled almost to sleep, that the rear door suddenly flung open. I was tossed on the road. I rolled and tumbled and I remember watching my father drive ahead, blithely unaware, before coming to another sudden halt that must have thrust everyone to the dashboard, this followed, once they got out, by my mother’s hysterical screaming, my aunt’s lamenting, my older cousin’s snickering.

To say that my adult heart has never fluttered at the prospect of a journey would be a patent lie. I have swum in the warm waters of Mexico thrice: twice in the Pacific, once the Caribbean. I once skied in Bulgaria. I have floated in a tube down Arizona’s Salt River, and climbed the rocks of the Pinnacles. I am no stranger to the wonders of the Appalachian Trail, or the intimate corners of Le Marais. And on two occasions during adulthood I willingly embarked on trips that had the makings of road trips

The first took place when, as a student, I left Arizona for St. Louis and a summer internship. Caught in an exploratory mood, I promised myself I wouldn’t rush to my destination; I wasn’t to start work until two weeks later. I would stop for the sights, unsuspecting of exactly how meager and barren I-40 would prove to be. I would veer off course for Santa Fe and Albuquerque; Springfield, Missouri sounded appealing to my naïve twenty-something-year-old self, too, and I marked it on my map—no Google map or smartphone—as a sight of interest, having calculated it would take two days of comfortable driving from New Mexico. All comforts, or whatsoever may be considered a comfort to a student, came to an end ninety miles inside the Texas panhandle, in the town of Bushland, on the southwest corner of Potter County. It was in front of Bushland’s Best Mercantile and Hardware (the owners’ claim of superiority of said enterprise rather pointless, I feel, in light of the fact that this was Bushland’s only Mercantile and Hardware) that my Chrysler suddenly coughed and spit and, like an ambushed horse, came to buck. The thermometer under the Mercantile’s tin roof registered 103 degrees. Paralyzed, I watched as two armadillos, perhaps a couple, hard to tell, came to rest in the shade of my front bumper.

It took twenty-four hours to leave Bushland, which wasn’t equipped with an automobile repair shop or gas station, and a week before I could depart Texas—though my memory maybe hazy on this: it may have only been a couple of days. In any case, by the time my tires touched the freeway again, I was more or less convinced it had been precisely the freedom to roam that had brought my car’s demise, and no promise of Spring nor Field was enough to make me stop again. I raced to St. Louis.

The last of these unfortunate road ventures I undertook during the time I lived in Seattle. My sister was visiting, and, unwillingly at first, I bought into the idea of a leisurely trip along the Pacific coast. We had only a vague sense of destination, our goal to head south. The car ride was pleasant enough at the beginning, and while the state of Washington streamed by our windows, cedars and Douglas firs and ponderosa pines, the snow-capped peak of Mt Rainier in the distance, I recall a certain euphoria, an elation that reached its apex while my sister and I head-banged in unison for the best part of the five minutes and fifty-five seconds it took Freddie Mercury to wrap up the Bohemian Rhapsody. Things soon took a turn.

It was a vague feeling of plunged mood that circled me at first, hard to attach to anything specific. As mile after mile clicked on the odometer, the trip’s aimlessness started to eat at me. Having lured me in its entrails, the road was finally revealing this terrifying truth: it was endless. It was entirely possible we could be driving forever, unable to stop, evermore seeking. It was a boxed-in feeling: the confinement of anticipation.

The minute we crossed the river to Oregon, I landed on the urgent need of extant and final destination. “Woodland sounds appealing,” I said, looking sideways at my sister. Shortly after, still waiting for a response from my dearest sibling, I pretended to consult the map. “Jesus, there’s a Columbia City in Oregon! Who would have thought. How about it?”

At around the same time, my sister, having traced the diametrically opposite emotional arc, sat up and clapped her hands. “Disneyland!” she exclaimed, putting on the same cartoonish voice we had continued to assume years into adulthood anytime something appeared particularly exciting. “Minnie! Mickey! The rides!”

This was my baby sister, you understand, and part of me, it needs to be said, felt that a mission embarked ought to be accomplished, even at a high enough cost. By the time we pulled into the parking lot in Anaheim, all five acres of it packed corner to corner, the noon sun ricocheting off the car roofs, I was fighting back tears. My sister and I did not drive back to Seattle. Having bought one-way plane tickets, we left the car in the hands of an ex-classmate’s brother, an eighteen-year-old with a protruding lower lip and acne-scarred forehead who promised to deliver it to my front door “zippity and in mint condition.”

Given my history, I find it impossible not to embrace this simple principle: the best way—the only way to endure the road is to not get on it at all. To me, real freedom begins the moment I get to unpack my bags, hear the whisper of the pines, smell the saltwater, or catch a glimpse of skyscraper, and declare each new place my home. The dark secret of the road is it is the same road everywhere, whether you call it Interstate 40 or Highway 1, whether in this continent or one afar. Parts of it may look different—the flora and fauna, the flatlands of Texas and rocky parts of Greece—but the essence of the road, its true nature, is frightening everywhere. An unremitting danger lurks beneath the gravel, a subterranean sepulcher; it takes a blink of the eye to plummet, despite the markings and signposts, the lighting and off-ramps. The road will trap and engulf you, and it seems to me its mission is to consume you, and do it speedily: before you reach St. Louis, a ways ahead of Puget Sound, long before you have a chance to glance the coast of Ithaka.

Asa Murphy has published in 7X7, and her fiction has been nominated for UCLA’s James Kirkwood Literary Prize. She is completing an MFA in Creative Writing at San Jose State University.