A one-man dialogue
|
Kimon and Myrtias 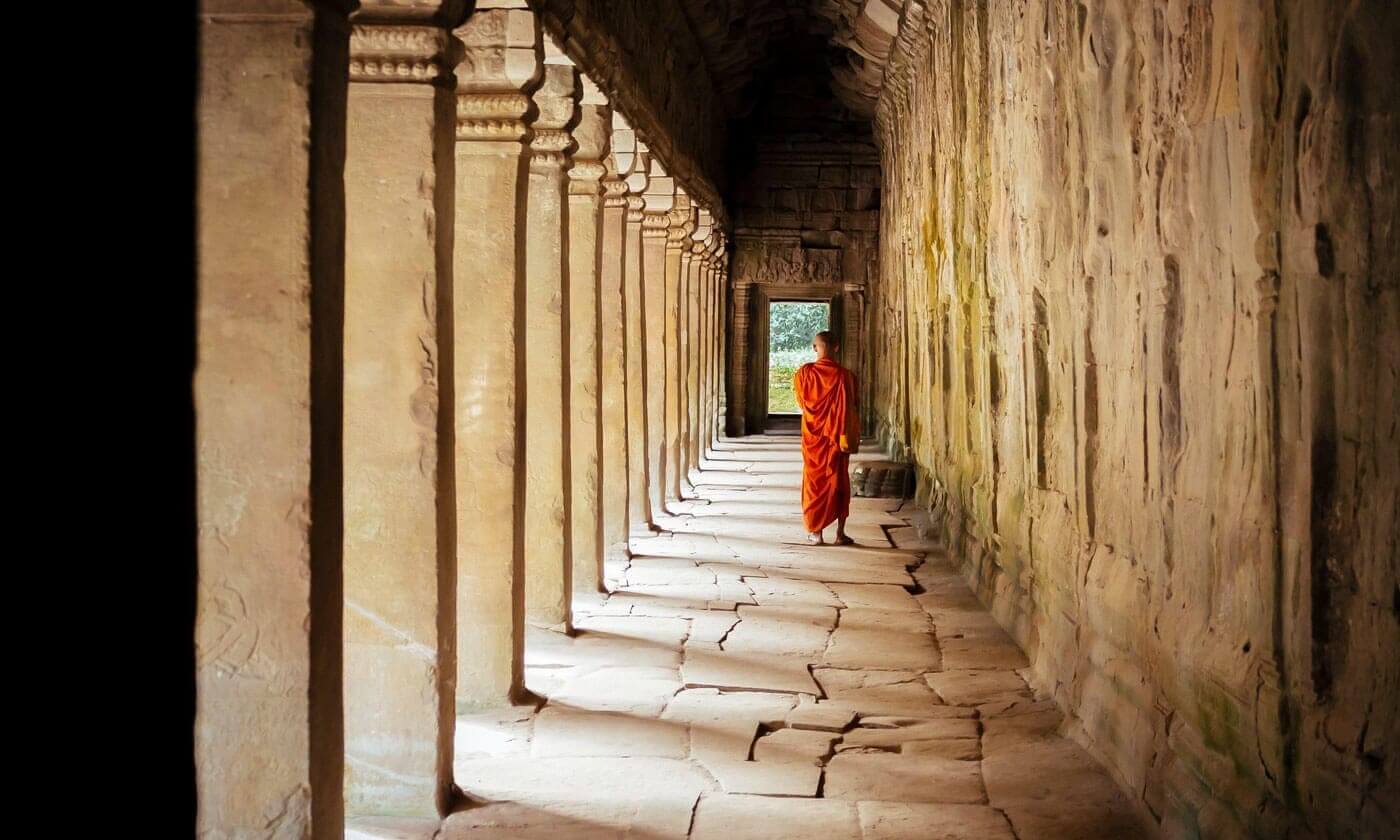 My grandmother’s favourite story was that of my birth and she would tell it to anyone who would listen. For I was born beneath a rainbow and she would always cherish the fascinated eyes moving along her crooked finger, while tracing its line through the air, from the river to the fields, with the entire village under its arc.

Zhangmu was a small village of no importance, dotted with green fields of barley, peas and mustard. Its most exciting feature was the river that crossed it, sometime shallow, allowing you to see only the shimmering ripples flowing gently towards. When the water was low the villagers would simply wade across to the other side and take their animals to pasture. But if a shepherd failed to bring back the animals at the right time, the river became impossible to cross, and he would have to wait for three or four days to find a ford.

My grandmother would, then, describe how the lama of our tribe had dangled two rosaries in front of my eyes, and how my tiny hands had jabbed forward and snatched one. ‘A good omen’, she would affirm, setting out to enumerate all the other auspicious signs that accompanied my arrival.

Who does he think he is? This ‘lama’? Dangling rosaries in front of me… of me! Always wearing those ridiculous robes… ‘Omens’… Pah! I spit upon your omens! They don’t know who I will become… No… None of them know… They talk of reincarnations and spirits… of the soul and of forgiveness. Let me tell you something about the soul… the soul is a LIE! We are nothing but husks, left hollow for the demons to inhabit. And those without demons… they are worse off than the dead.

I feel you Ekajati, I feel you take root inside of me… But I won’t let you gain control. I am a husk, huh? I’ll show you what a husk can do! Not like those craven fools in the village, preaching away at empty stars… No… the true gods rest in the ground… I can see you there, as I tread barefoot through the night, I can feel you stirring from within, laughing at their idiocy. Well, I am not like them… And once you face my wrath, you will rue the day you thought to strike me!

Ah… You know that place between sleep and awake, where dreams feel tangible, and real life drifts away – it’s there that I see her crystal clear. Surrounded by attendant clouds, with sheets made of rain, the ancient goddess lies dry, all clean and bright, over the freshly cut waves. Yet the sea was friendly no more. It roared and bellowed, it bit its teeth, it shook its mane of seaweed fibres.

Each night, a new promise to myself, that I would never pursue to gaze across those waves. After all, I was happier in the monastery than I had ever been. As a herdsman, my life was full of anxieties; I had to worry about protecting my yaks from wolves, and I had to look after my sisters, parents and grandparents, as the only young man in the family, while life in the village, for all its beauty and its nomadic spirit, was quite lonely.

But as a monk you just have to cry with the sinners and laugh with the saints, working towards enlightenment. My mind became clear of the vanity of pleasures, my problems washed away with the austerity of the hermit life. I would lift my eyes to the sky, an action repeated by millions of human eyes, and I would find something in it, it was part of the air I breathed, a crackling tension in the atmosphere, always ready to erupt in showers of sparks or discharge itself in thunderous peals.

Ohhhh… WHAT are you talking about? As if I ever cared about them… No, it was much better then. I rose whatever time I wanted, and spent the day lying in the fields. Now it’s all: nothing, nothing, nothing. Sit here and do: nothing, pray and think of:nothing. You know why they tell you to think of nothing? Because they don’t know. They don’t know the true form of the gods, they haven’t seen them as I have, as wehave. Nooo, they mask their blindness with their own eyes. Hah, they close them and humm, and hope that the gods will hear them. What idiocy.

You know what she told me yesterday? Ekajati? She came as I was tending the gardens with Rabten, that snivelling degenerate. Kill him, she told me, kill him, and then she laughed. I won’t be taken by you so easily Ekajati, laugh all you want. I am not as fool as them. No. If I killed him they would lock me up. Up there in the tower, with no windows and no door. Three-feet of stone are the walls. I counted them. Do you think I could hear the melody in there? Do you think I could hear the music? I will not be deafened by your tricks… and certainly not for the sake of a miser like Rabten…

After all, rage is a powerful energy that, with diligent practice, can be transformed into fierce compassion. The secret is to remove all ideas, all thoughts, in order for the truth to have a chance to penetrate, to reveal itself. I just stood still, just as the garlands and the wreaths were lying dead on the bench that I shared with my dear friend Rabten. I prayed as I breathed, forming no words and making no specific requires, only holding my heart for the gods, like broken birds in cupped hands.

I could not hear Ekajati any more, as my ears were meant to hear only the tongue of the bell, which was wetting its round lips. Its metal sides were covered in scenes, bas-reliefs spreading their greenish lace over the bronze dress. The bronze was a wild orgy, a drunken, obscene carnival; Rakshasas, Dorje Shugdens and Maras all swirling round the bell, its curve giving them an insane movement. A true frenzy, as the demons looked as if they were each discovering their naked flesh, which was not yet ripe for sensual pleasure. Sin was everywhere triumphant, howling cynical to fill the vacuum of the meaningless nights, since long is the night to him who is awake, as long is life only to the foolish who do not know the true gods.

Curiosity is gluttony… Ahh, they say it again and again, all day long. Words stripped of any essence. They pierce my ears, they devour my inners. Slowly and painfully. A true torture, do you hear me? They eat me alive. They rip the flesh of my brothers. Brothers? Huh, NO! Rather cement faces and eyes of hate covered with graves’ dust and age, the ugliness and rottenness of old abominations. The mouths only left to never stop repeating the words… The sacred words… The solemn words… The cavities of their teeth moving up and down, their griming uppers and lowers empty and at the same time, containing all the emptiness of this world. Of the entire universe.

And their dead lips disfigured. And their saliva flowing down the dirty floor and waiting there like dew drops for the warmth of mornings. But those puppets will never live to enjoy them.

But I am constantly craving, not just the mornings, but life itself. Even the berry that breaks upon the tongue, the taste refracted into luscious juices, endless hues and savours of ripeness.

And I cannot taste any of that. Life in the monastery is mocking me, projecting its tongue out proudly – TA DA! Death is buried there in the ancient spirits, hunger strikes on its own last breath, no spine to shiver, no heart talks. The wind is tearing off my voice, is gagging my mouth, with my own blown hair, but the hair violently shaved by the same razor that threatens the throat.

Stop… stop please… so many voices… I can’t stand it. I don’t know what’s real and what not. Just let me think for a second… Finally. This is me. This is trulyme. These urges… I don’t know where they come from, but I lose control - all control. I no longer recognise what I’m doing. Then suddenly I’m back, and the memories I have aren’t mine, they can’tbe mine, yet I remember them. Only the bell grounds me. Whenever it strikes I know it to be true. Everything else is just passing. People, voices, the light… None of it resounds within me. Not like the bell. Maybe I’m going mad. Is this what people who are mad feel like? I don’t know...

Perhaps I should meditate. Clearing my mind, from good and from bad. Starting anew on a clean slate. I know if I did that I could purge the other voices. This is the true me. How could it not be? I can reason. I can think and imagine and remember. The rest is a disease. A virus - IT IS A - No, stop. Relax. There. Listen to the bell. One. Two. Hear the depth of the striking. How true it sounds. Five. Six. Oh… that’s it. Is that it?