A Cabin in the Fog
|
Vladi Voinich 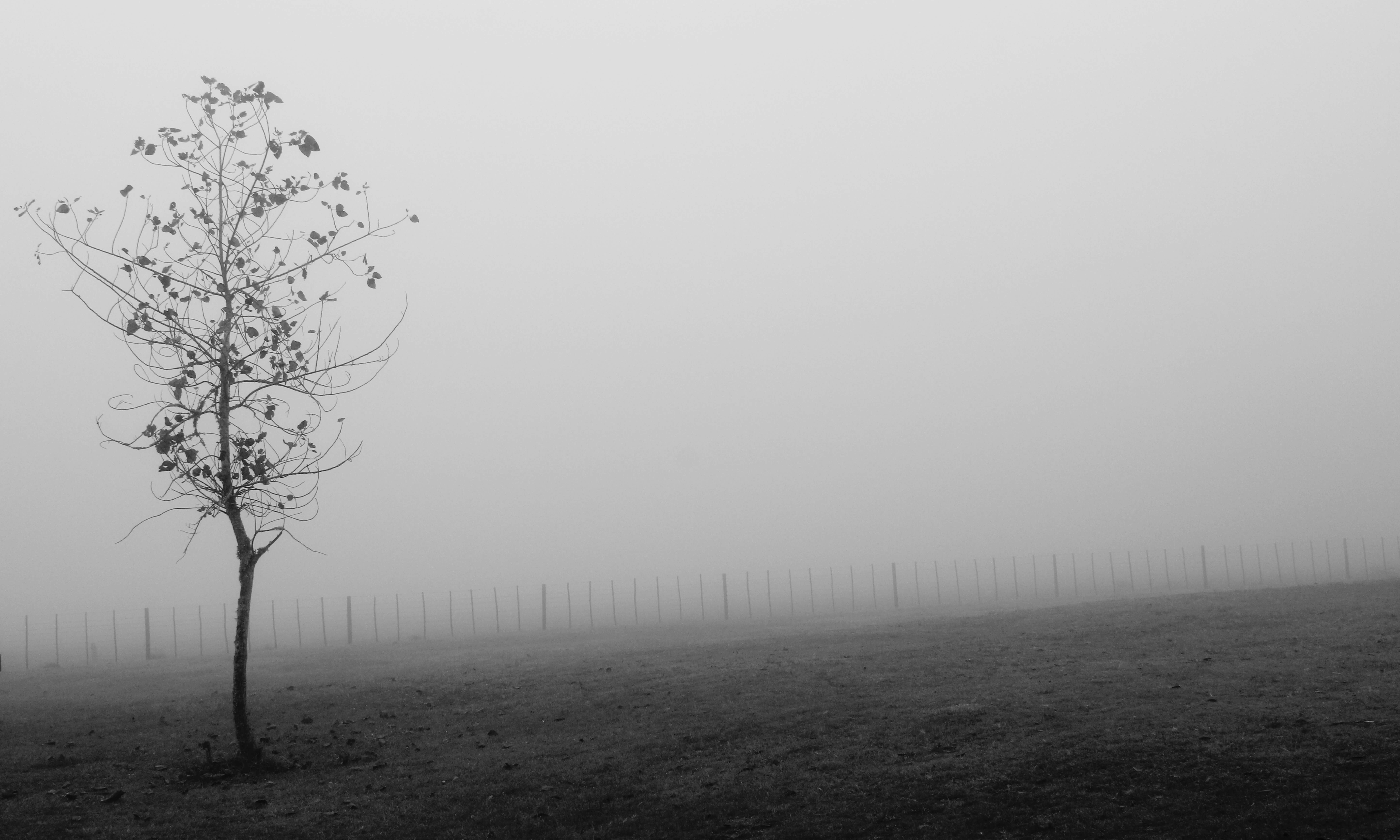 A Cabin in the Fog

“Thus, I’m fighting for myself when I ask you to stop,” said the last sentence of the letter. Drizzle and a thick layer of fog. Leaning towards the warm fireplace of the moderately comfortable cabin, he intends to get that log fixed so that it won’t dirty the floor or perhaps cause a fire that would consume both of them gradually and bury them alongside all those books that would turn into ashes and blend with human ashes and create a flaming-hot and light-grey amalgamation of past knowledge and unrealised potential. Somewhere in the background, probably not very far from the cabin though it is impossible to tell, a wild animal was crossing a creek to get back to his family and tell all six of them about his horrendous day at work, how the enterprise is experiencing a recession and how some idiotic narcissist was busy chopping wood and stocking it inside a strange wooden construction. What kind of place does he live in? The animal made an irritated noise – probably thinking of all the unnecessary pleasantries and interactions he would have to confront once at his habitat – and kept on stomping out of the mad creature’s zone. The log finally caught on fire and started cracking up with the laughter of an experienced smoker. Yes. It has been an insightful read.

“Don’t you find personifications odd?” inquired his companion. “I mean, every time I read about some object, a log say, or a piece of paper being described as a human I freak out for a while. What is so special about us that we want to simulate everything in our image, hmm?”

“Ah, yes, the great old vulnerability. Something everyone can afford but not everyone enjoys the payback time. Enough about that. Well, actually, what was that poem?”

“You recited it to me some time ago,” and she looks at him with a mute question in her eyes combined with an attempt to remember the words. “The one about the night and the pharmacy.”

“Oh, Blok, why would you want to hear it now? Aren’t we too sober to read poetry anyway –” But the pop of a cork interrupts him and a bright smile on her face illuminates all corners of the room.

“Always ahead of you.”

He begins reading the poem, she sinks in her chair and her proximity becomes so palpable all of a sudden. Like a cat, she follows the words as if they were some kind of reflections of the sun, yet she does not allow them to trick her fully, she chooses to be tricked. The drizzle is over. Time to go outside. It’s not that they wouldn’t enjoy getting wet – unlike cats they don’t mind being struck by droplets – the simple truth is: the poem is over. Though the drizzle is no more, the fog is strong as ever, covering the mountains around them in what looks like clouds of ashes.

“From dust,” says his companion and turns to face him with that cat’s grin of hers. She starts walking towards the creek and realises they are not alone in the woods, they are being watched by eyes of all sizes and colours. And then, she feels the warmth. Maybe because of that realisation, maybe because the wine kicks in again. “What would Kafka say to Milena about this?” Indeed, what would he say? Because he sure did not feel like saying anything. Instead, he looked at the ground at their feet and noticed the footprints of the unnoticed working-class animal. For a second there, those footprints looked like his own and the place felt like he’s lived there all his life and all he’s known were those hills covered in the remains of dead books. What kind of metamorphosis was that? An almost undetectable cough on his right: “What are you thinking about? That letter still?” He responds with silence and a foggy smile. “Okay, I admit it was pretty touching,” says his companion and starts walking back to the cabin area where the fog has not yet completely consumed all the stars. Always ahead of him. Like some ominous presence that only brings about positive self-consciousness. He was truly curious as to why she would spend her time in the middle of a forest so far away from the city she presumably loved and cherished. But then, who doesn’t like listening to the language of birds, and the howling of the wind, and being watched by thousands of eyes. Watched without condescending motifs, or personal motifs, without any motifs really.

He inquired, “Do you ever wonder about all those stars and what they mean?”

“Every now and then, yes. But isn’t it such a cliché: enjoying something so distant and impossible? I like the sensation of bathing in the air. It’s all around me and you sense it too. This is proximity.”

“Perhaps we need that distance to appreciate the proximity…”

The log is now turned into past knowledge and they have to sacrifice a new one. In the cabin, the laughter starts again. It fills the mute room with patient and pensive atmosphere. This log could have become a page in a collection of poetry and yet it stayed at home, enjoying the belonging and feeling appreciated by those who rubbed their backs against it before returning to their business as usual. Unrealised potential. The fear of non-becoming. Overpowering and untamed. The last sentence of a different letter said: “And when you go to bed tonight, as a good wish from me, take in – all in one stream – everything I am and have: all of which is blissfully happy to rest in you.”

“Why are you crying?”

“Look who’s asking,” said he, rubbing away his tears with his right sleeve and giggling, though it was hard to do with his throat stuffed with reserved emotions.

“I’m telling you, honey, those humans are strange creatures,” mumbled the animal and walked towards his sleeping offspring. His companion was uninterested in his earlier observations – she’d grown accustomed to his constant musings and vain attempts to comprehend others. The creek was more enjoyable to watch, to listen to: always fluid and never the same. She, too, stargazed and stared at the fog hoping that one day something would come out of it and tell her partner to be silent and shut up for once. Dreams. The cabin is full of dreams, warmth and passion.

Vladi Voinich has spent most of his life in Belarus, Turkey, Italy and on the road. Now, he is based in the USA where he studies French and English at Whitman College. His main inspirations and influences come from (Italian neorealist)* cinema, (modernist) literature, his travels, (post-punk) music and critical theory. In his writing he explores such themes as solitude and belonging, home and exile, and love and alienation. *the brackets mean "not exclusively but predominantly"