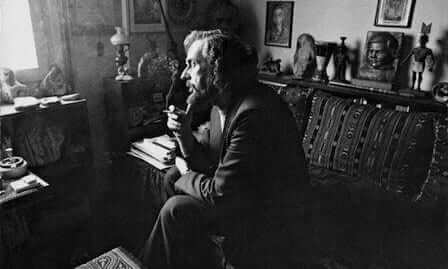 The three of them sat before the window looking at the sea.
One talked about the sea. The second listened. The third neither spoke nor listened; he was deep in the sea; he floated.
Behind the window panes, his movements were slow, clear in the thin pale blue. He was exploring a sunken ship. He rang the dead bell for the watch; fine bubbles rose bursting with a soft sound- suddenly,
‘Did he drown’ asked one, the other said: ‘He drowned.’ The third one
Look at them helpless from the bottom of the sea, the way one way look at drowned people.

[from the collection Gestures]

The city all lit up under its evening sky;
Two bright red lights blink inexplicably high up;
The windows, the bridge, the streets, the taxis, the buses.
‘I too had a bicycle’ – he said; - ‘I was dreaming’ he said.
The woman in the room looked away; she didn’t say a word;
Her dress was unstitched on the right side; if she stood
One could see her shoulder was bent. As for the rest,
One can’t talk about them – he said; you keep them like broken water glasses;
You take them down yourself, when the rubbish collector passes,
With a guilty eagerness, early in the morning, the beautiful water glasses
Wrapped in old newspapers, always anxious
You might knock them against the rails of the staircase, because they still ring
With a deep sound, penetrating – that unbreakable sound
As if conspiring with the window panes, with the wind, with the walls.
The blind musician then goes up the stairs exhausted; he puts down
His violin case on the chair; he opens it; in it
Are two of the three water glasses, glittering, whole.

[from the collection Muffled]

The sun sank, pink, orange. The sea,
Dark, azure green. Far out, a boat – a black rocking mark. Someone
Stood up and shouted: ‘A boat, a boat.’
The others, at the coffee house, left their chairs, they looked.
There was a boat for sure. But the one who had shouted,
As if guilty now, under the stern looks of the others,
Looked down and said in a low voice: ‘I lied to you.’

[from the collection Testimonies A]