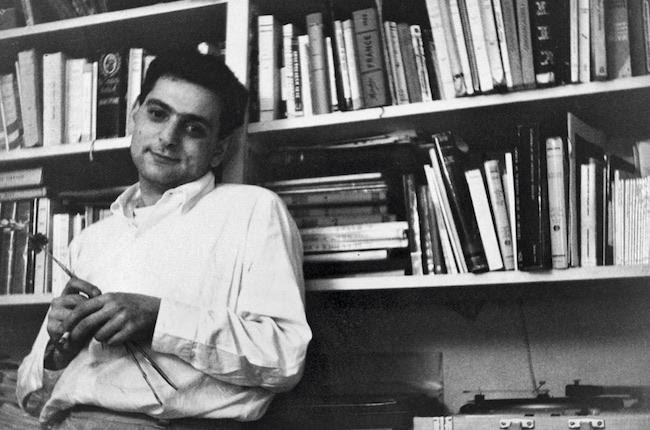 An introduction to the French Oulipo

Since 1960, the French Oulipo (short for Ouvroir de Littérature Potentielle) has brought together an eclectic bunch of writers, poets, and mathematicians all united by a passion for writing under constraints. According to the Oulipians, setting constraints—such as the absence of the letter ‘e’ in a novel or replacing every noun in a poem with the seventh noun after it in the dictionary—allows writers to produce uniquely creative literary works. Georges Perec, one of the most prolific Oulipians, was also a dedicated cruciverbalist. He constructed at least one hundred crossword puzzles and sold them to the puzzle sections of French newspapers. Perec even embedded crosswords within his literary works. La vie mode d’emploi, Perec’s most well-known novel (translated into English by David Bellos as Life A User’s Manual), contains an unfinished crossword puzzle, and his essay ‘Sur l’art et la manière de croiser les mots’ explores the complexity of building an elegant crossword with the help of several examples. However, no translator has published a translation of even one of Perec’s puzzles from his anthology Les mots croisés, perhaps because translating a pattern of interlocking words and their respective clues seems an impossible task. The crossword is indeed an extreme example of the Oulipian constraint, relying more on the placement of individual letters than on the coherence of the overall text.

Translation and the Oulipo movement have much in common with each other. In her essay on Oulipian translation, Alison James argues that all translation is, by its very nature, constrained writing: ‘Rather than representing cases of absolute untranslatability, these texts present, albeit sometimes in extreme form, many of the difficulties that confront all literary translation’ (James 137). Adhering to literary register and poetic form, replicating word play, and translating cultural references are only a few of the skills translators must employ when rendering a text, Oulipian or otherwise, into the target language. Can the translator harness these same skills, then, to translate a seemingly untranslatable crossword puzzle?

Hans Vermeer writes that the skopos (or the aim) of a translation bears an effect upon the translational action, or the creation of the target text. While his essay is primarily concerned with translation as commissioned work, his skopos theory equally applies to the translation of literature and literature-adjacent texts such as word games and puzzles. Vermeer explains that, to produce a translation, the translator must approach the source text with a specific function or goal in mind for the target text. The translator may also divide the source text into sections with different ‘sub-skopoi’ (194). The skopos (or skopoi) for the project subsequently dictates the translator’s strategy and influences the form of the final product. Henri Picciotto and Arthur Schulman, who respectively come from mathematical and puzzle-writing backgrounds, decided that the skopos for their translation of Perec’s essay ‘Thoughts on the Art and Technique of Crossing Words’ was to produce a translation with crossword examples that might serve as an instructional guide for amateur crossword builders. They specifically mention in a footnote that their aim is to recreate ‘Perec’s puzzle constructor’s ethos’ (10). Perec notes in this same essay that Anglophone cruciverbalists have different standards for their puzzles than the French. In one of the annotations to the translation, Henri Picciotto elaborates on Perec’s observation:

English-language crossword constructors value symmetric diagrams, and are concerned about the number of ‘unchecked’ letters. (Letters that are not at the intersection of two words.) If these concerns are addressed, the number of black squares does matter, and ‘wide open’ diagrams are valued. In the end, differences in geometric constraints and in the available lexicon lead to different compromises. American crossword editors forbid unchecked letters altogether, require symmetry, and enforce a three-letter minimum word length. (Picciotto and Schulman 10)

Picciotto and Schulman’s footnotes regarding the ‘rules’ of English-language crossword writing make clear their intention to create high-calibre English puzzles rather than pay homage to Perec’s French puzzles. Furthermore, the authors note in response to a comment from Perec about using backward words in grids that ‘English language puzzle constructors would never use a word spelled backwards when conventional efforts at grid filling fail’ (11). The rigour with which the translators construct their puzzles according to English crossword customs implies that they intend their translation for a serious puzzling audience. The skopos of my translation of Perec’s Puzzle N°8, however, is to highlight the literary merit of the clues rather than to build a well-arranged grid.

In his article tracking the importance of grids in Perec’s oeuvre, Warren F. Motte notes, ‘The form of La Vie mode d’emploi is remarkably similar to that of the crossword puzzle, as well as to that of Perec’s [anagrammatic] poetry: it constitutes a heuristic (and ludic) system wherein the grid serves to structure the play of combinatory poetics’ (Motte 830). In a broader sense, this observation describes the entirety of the Oulipian genre: intellectual and rigorous in its form, yet imaginative and playful in its content.

As is the case with most Oulipian translation, the rigid constraints require the translator to either forsake form to keep the literary content or rework the content to fit within the form. Because I approached my translation with the skopos of highlighting Perec’s esoteric clues rather than assembling a perfect grid, I have opted for a free-form puzzle, eschewing both the French and English crossword conventions, and staying as close to Perec’s definitions and word choices as possible. Vermeer explains in his skopos theory that different skopoi for translating the same source text can cause translators to produce significantly different final products: ‘…source and target texts may diverge from each other quite considerably, not only in the formulation and distribution of the content but also as regards the goals which are set for each’ (Vermeer 193). The original puzzle, a tight ten-by ten grid, has only seven black squares:

In my translation, I have kept all of Perec’s clues instead of creating my own to fit the grid. While Perec emphasises the importance of beginning with grid construction and fitting words together letter by letter, then writing the corresponding clues, my process reversed the two steps. I translated the clues, then inserted them into an online crossword software. Picciotto and Schulman note in their annotations that many crossword writers today opt for such software when constructing their own grids (10).

In terms of clue translation, the most straightforward clues to translate were built around proper nouns or recognisable cultural references. One such clue, ‘Go West!,’ with the solution MAE, required no translation at all. I also found a simple equivalent for the clue ‘C’est la Dolorès à Vladimir,’ referring to LOLITA: ‘Vladimir’s Dolores.’

The most difficult clues to translate, however, relied heavily on French idiomatic expressions. The clue ‘Un baba, un soufflé, et même un peu de flan !’ for example, has the solution ÉTONNÉ, meaning surprised. The clue mentions three traditional French desserts, but Perec relies on the reader’s knowledge that all the desserts figure in expressions meaning to be surprised: ‘être baba’ (to be flabbergasted), ‘être soufflé’ (to be taken aback), and ‘en rester comme deux ronds de flan’ (literally, ‘to stand there like two circles of flan,’ meaning to stand there dumbfounded). I thought about finding idiomatic expressions in English that also mention dessert, but then thought of three expressions all containing the word struck and evoking feelings of surprise and awe: dumbstruck, awestruck, and thunderstruck. So I then constructed the following clue: ‘Dumb, awe, thunder.’ I am proudest, however, of my translation of clue 1-Horizontalement, ‘cherche à vous faire la peau.’ The expression faire la peau à quelqu’un, which literally means ‘to do someone’s skin,’ is a colloquial way to talk about killing someone. It translates to ‘doing someone in’ or ‘bumping someone off.’ Perec takes the expression literally in his clue and provides the answer SIMILICUIR (pleather). I decided to find an English idiom using the word ‘skin’ and came up with ‘no skin off its back’ for my clue. The reader may at first read the clue to mean ‘of no interest or concern,’ but in this context, it means no animals were harmed to make the answer: PLEATHER.

I had no choice but to replace Perec’s clue ‘Chaussée… par Dagobert,’ which relies too heavily on cultural references that would be impossible to decipher for an Anglophone audience. Perec’s solution, NITNA, is the name Antin spelled backwards. Chaussée d’Antin is the name of a street and surrounding neighbourhood in Paris’s 9th arrondissement. Perec’s puzzle demands that the reader not only know this geographic reference, but to make matters worse, the clue also requires the puzzler to remember that ‘le bon roi Dagobert’ wore his breeches backwards in a French children’s song. Therefore, any time Perec invokes the good king Dagobert in a clue, the reader can expect the answer to either be backwards or scrambled. Such a complicated and culturally specific clue would have been completely inaccessible to an English-speaking puzzler, so I thought of another ‘good king’ from an English song and came up with the solution WENCESLAS. In case the reader wishes to play along and discover how I have rendered the remaining solutions, the answer keys for the English puzzle is attached above.

Although translators have attempted to render a few of George Perec’s smaller crossword grids into English, no translator has translated a full-sized Perec puzzle complete with clues (or at the very least, no one has published or publicly shared such a translation). Both Bellos’s puzzle and Picciotto and Schulman’s puzzles are embedded within larger texts—a novel and an essay—and form hurdles that the translators must surmount to translate the literary work in its entirety. Perec’s standalone puzzles themselves deserve focus, not as pieces of a larger work, but as literary amuse-bouches: exquisitely crafted snapshots of Perec’s playful mind and impressive intellect. In his essay on translation under formal constraints, Bellos concludes by saying that ‘the only impossible things in translation are those that haven’t been done’ (‘Custom Cuts’ 145). My translation of Puzzle N°8 is proof that translating Oulipian crosswords is, in fact, a possibility, if only translators are brave enough to accept the challenge.

- Picciotto, Henri and Arthur Schulman, translators. Georges Perec. “Thoughts on the Art and Technique of Crossing Word.” The Believer, no. 37, 1 September 2006. https://believermag.com/thoughts-on-the-art-and-technique-of-crossing-word/.

Maggie Vlietstra is an MFA candidate in literary translation from French at Boston University. She is interested in the translation of slang in contemporary literature, and is passionate about all things Oulipo.

Marina Jarre: A Writer for Our Times - A prologue by Marta Barone