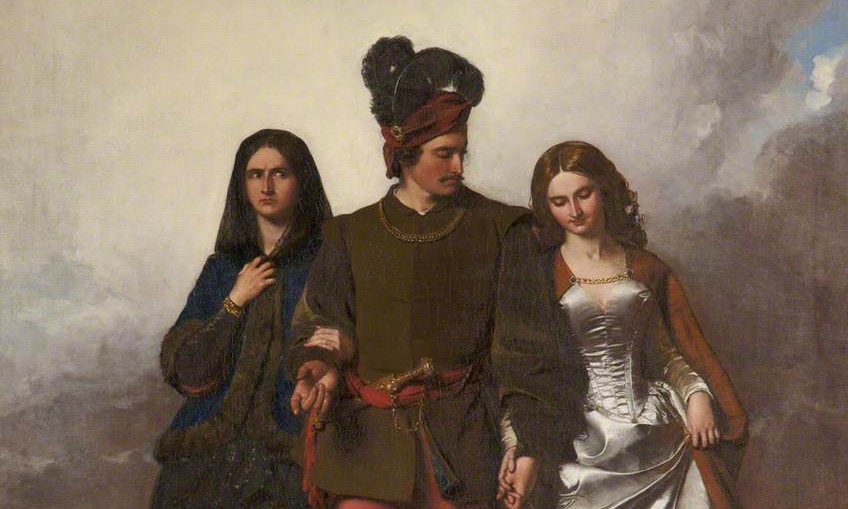 This story is based on the group of murder ballads known as “The Two Sisters”, found in various forms throughout Europe. The version most often sung tells of a man who courts two sisters and falls in love with the younger. The elder kills her sister for love of the man and marries him, but she is publicly accused by an instrument made from the younger girl’s remains.

There were two sisters lived in a bower,
Binnorie, o Binnorie

“You’re none so fair they’ll look at you,” my mother said. “Send your sister. They’ll take kindly to her.”
“And what of me?”
“Play for them. Your voice is soft enough, for all they’ll care once they see her.”

The youngest was the fairest flower‍

I was a fair harper. And so, I played for my father’s guests while she sat among them, tossing her hair and laughing. I sat among them when their minds had dulled enough to sing the charms of any old crone, and when their hands wandered, I went to sit alone.

He came after that. He was young, not like the merchants with the wandering hands, and dark, as I was. He stammered when he spoke, for aught I cared. His voice was low and gentle.

I loved him then. And yet I should have seen that he was no different from the rest; his eyes wandered, even if his hands were too pure to do the same. Rings he gave me, and my sister tender looks. Beautiful rings, to be sure, but I had enough of those. I did not want those.

Of course I said nothing, and they never knew. She asked me, the next night as we were in bed, whether I loved him. I feigned sleep. But I knew he would ask for her hand, not mine, and it would be his voice and his heart in those words which would never be mine.

So she pushed her into the river to drown
O the wind and rain
Watched her as she floated down,
Crying o! the dreadful wind and rain‍

You see then that it was quite simple. I did kill her, oh yes, the harp spoke truly enough.

She offered me half of her land, dying and drowning in the sea. As if I would have taken it from her living hands. If she thought to save herself by it, it was a futile wish.

Your houses and land I’ll have and more
And your own true love to keep me warm.

Perhaps she guessed what it was I wanted in the end, but then it was far too late. Once she had drowned (what easier than to run screaming up the riverbank, terrified and grieving, near-escaped from drowning myself?) I near forgot her. The cursed miller’s daughter, always so fanciful, found her body and showed the harper as he passed. I had ever disliked him.

He made a harp of her breast bone
And its song would melt a heart of stone.‍

I thought that perhaps once she was gone I might have peace, or at least once I was wed that I might sleep. But of course the damned harper came to my wedding.

The first spring that the bonnie fiddle play’d,
‘Hang my cruel sister, Alison,’ it said.

Oh, how he looked at me. And yet it went on.

The very first spring that the fiddle did play,
‘Hang my auld sister,’ I wad it did say.
‘For she drowned me in yonder sea,
God ne’er let her rest till she shall die.’

The third string sang beneath his bow
And surely now her tears will flow.

They never did understand. I did not weep, even when they put me in chains. I never lied. I had always hated her, after all. They ought to have known that. I suppose, that like him, they never cared to see.
They’ll hang me for this, I suppose. Or burn me. It hardly matters. He no longer looks me in the face. Perhaps it’s as well.
For I think I no longer love him. And that is too dangerous. If I am to be further sunk in sin, it were better that he not pay the price.
I shall burn this once I have done with it. I do not mind ashes so much, at least they are dry. I dream too often of drowning. I hope they do not drown me.

Allison King is a writer and musician from Ottawa, Canada, currently pursuing her passion for beauty through the study of interior decorating. She enjoys using her writing to explore the complex dynamics of interpersonal relationships and places she has never been. She is now at work on her first novel.

How We Remember The Dead