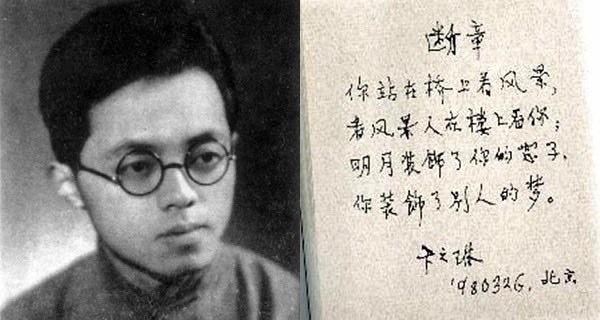 You are standing on a bridge enjoying the view;
Someone’s watching you from a balcony.
The moon adorns your window:
You adorn someone else’s dream.

[Published in The Anchor Book of Chinese Poetry - from ancient to comtemporary, the full 2000-year tradition. Edited by Tony Basrnstone and Chuo Ping. Anchor Books, NewYork, 2005.]

Bian Zhilin was a poet and a translator of French and English literature into Chinese. He was born in Jiangsu and studied Western literature at Beijing University, graduating in 1933. Under the patronage of Xu Zhimo, Wen Yiduo, and Shen Congwen, he began writing the new, vernacular poetry of his day. His early books, generally considered his best, include Leaves of Three Autumns (1933), Fish Eyes (1935), and The Han Garden (1936), which included work by He Qifang and Li Guangtian; his last book was Poems of a Decade (1942).

Bian was a schoolteacher for some years and then supported himself as a freelance writer. As Bonnie S. McDougall and Kam Louie write, "Out of intensive study of nineteenth- and twientieth -century English and French literature (and his own much-praised translations), against a general background in classical Chinese poetry and Buddhist and Daoist philosophy, he had perfected a strongly individual style". Like other writers he joined the revolutionaries in Yenan in the late 1930s, but in 1940 he left for Kunming, where he taught literature. He joined the Communist Party in 1956.

Born and raised in Taiwan, Dr. Michelle Yeh received her PhD in comparative literature from the University of Southern California and is Distinguished Professor in the Department of East Asian Languages and Cultures at UC Davis. She is a world-renowned scholar, translator, author, and editor in both English and Chinese, who has published more than a dozen books and more than a hundred articles.