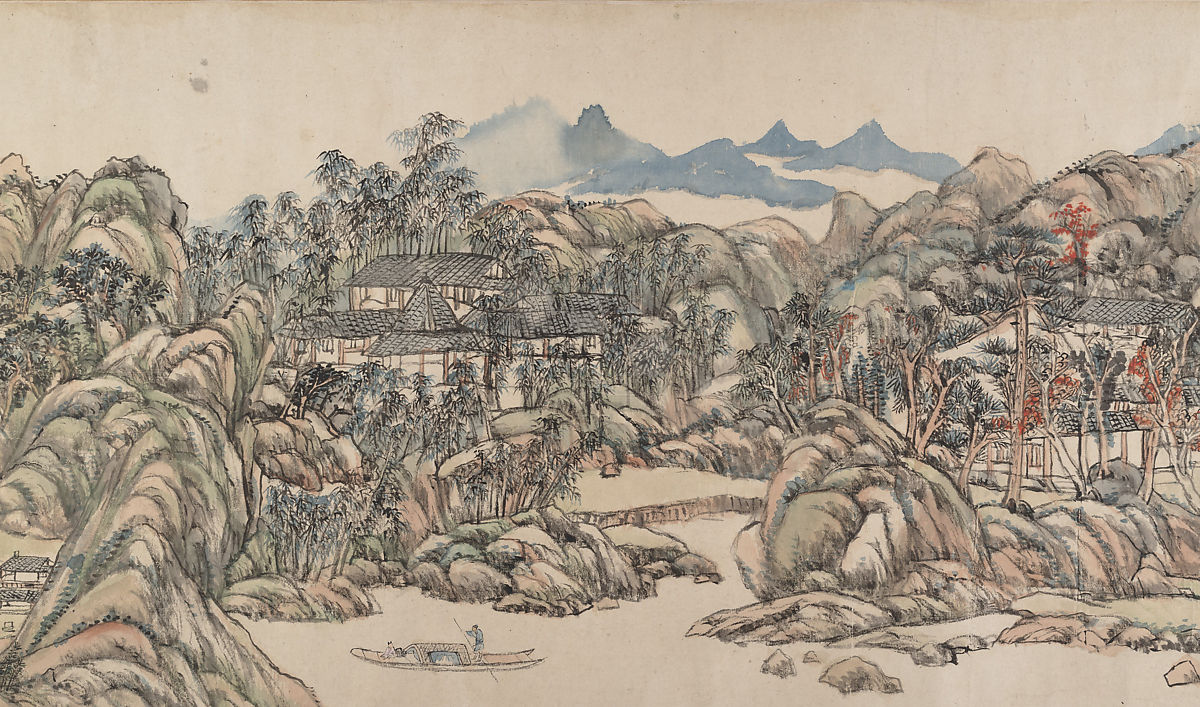 Written During a Long Rain at Wangchuan Villa

Swelling rain, empty forests — smoke and fire are slow in coming;
Steaming herbs, cooking millet: rations for eastern laborers.
Quiet, misty rice paddies — the flight of a white heron;
Through shaded summer trees warble golden orioles.
In the mountains, studying quietude, watching the morning hibiscus;
Beneath the pines, quietly abstaining, gathering dewy sprouts.
Wild, old — done vying with people for status:
Why should the seagulls and I doubt one another?

* “Seagulls” pulls a reference from the Liezi in which a young man walks easily among the shorebirds. One day, his father asks him to abuse this trust and catch one of the birds; upon his return to the sea, the birds, aware now of his intention, come to him no longer.

Reluctant, tarrying to stir horse and carriage —
Melancholy in leaving the lichened pines.
To endure departing the blue-green mountains,
Go on, just as the emerald waters do.

Quite simply put, there are writers that one feels one knows. To state that thought in yet another, more long-winded way, I’ll lean on one such author in my life, Lin Yutang. In the preface to The Importance of Living, he writes that a reader “will often be astounded to discover how another writer said exactly the same things and felt exactly the same way, but perhaps expressed the ideas more easily and more gracefully. It is then that [the reader] discovers the ancient author and the ancient author bears him witness, and they become forever friends in spirit.” These souls, he goes on to say, are then joined in “the only form of spiritual communion that I recognize as real — when two men separated by the ages think the same thoughts and sense the same feelings and each perfectly understands the other” (Yutang, p. vii). This was precisely how I felt upon first reading Wang Wei’s poems concerning his estate at Wangchuan.

Wang Wei wasn’t the first poet to inhabit the Wangchuan estate, though he was the one to immortalize it. Originally belonging to Song Zhiwen, the villa likely came into Wang Wei’s possession sometime in the early eighth century. Nestled into a river valley in the Zhongnan Mountains fairly near to the Tang capital at Chang’an, the villa quickly became something precious to the unwilling statesman. Like Wang Wei, I think many of us (certainly myself) feel as though we inhabit a point between tensions: on one hand, we long to go out into the dust of the world and make a mark; on the other, we desire to transcend it and sit among the clouds. Many of us never find that balance — perhaps Wang Wei himself failed to.

Yet, when on leave from his work at the capital or making tours of various cities and provinces, he found respite at Wangchuan, carefully observing nature’s tendencies with the literary kinship of Pei Di. The two shared an ideal poetic friendship and explored the natural world around Wangchuan together, but, as Wang Wei grew on in years, he sank deeper into Buddhist thought, which “taught him the world was empty and offered the promise of freedom and release from that world” (Hsieh, p. 30). Wangchuan’s setting then became multilayered: it was a hermitage built for communion with nature and the mysteries of friendship, and it was also a place for settling into emptiness, realizing insights into the nature of mind, suffering, and impermanence. Many of his poems are tinged with these insights, yet firmly ensconced in naturalistic imagery, and this is what gives them some of their (dare I say?) permanence. Wang Wei has been read for over 1,200 years, and this doesn’t seem likely to change, especially as his works are translated into new languages, at different times, for different generations.

In terms of translation, I suppose I work within the “no frills” school of Chinese translation as espoused by Wai-lim Yip. As he lays out in Chinese Poetry, his method (which is also mine) is to lay out each poem in three parts: the poem in the original Chinese, the poem as a series of word-for-word translations, and lastly as a fluid translation “with minimal but workable syntax” (Yip, p. xiii). This setting forms the space in which the poem leaves one homeland for another. And this journey is not an easy one, as distant linguistically and aesthetically as English and Chinese are — Chinese poetry is far more sparse and ambiguous than traditional poetry in English and its intimations subtler. Yet we must, in the end, ferry readers from one worldview to another. So how best to build an imperfect bridge? English cannot do what Chinese does, though it can be approximated. What the Chinese poem does, in Yip’s words, is create “an indeterminate space for readers to enter and reenter for multiple perceptions rather than locking them into some definite perspectival position or guiding them in a certain direction” (Ibid.). It is this indeterminate sparseness which invites readers in and keeps them there, and the vagueness is not a bug but a feature. In the end, what I’ve striven to do — through minimal, workable syntax and, I hope, my literary friendship with Wang Wei — is build the best imperfect bridge possible. My desire is that such a bridge supports the reader during the crossing, but crumbles almost underfoot, leaving them a bit stranded (though not unhappily) and a bit unsure as to how to return home.

Concerning home, the poems I chose are particularly poignant to me as they together represent the three acts of coming to dwell in a place: the arrival, the living, and the departure. Given the nature of Wangchuan as a retreat, we can imagine Wang Wei coming and going from his estate many times over the course of years, each time more joyful in the coming, each time more melancholic in the leaving. And settling into these poems after our tenuous crossing, poet and reader might just become forever friends in spirit.

Talbot Hook is a PhD student and occasional writer currently living in Connecticut. His poems, short stories, and other writings can be found scattered across the internet.

Marina Jarre: A Writer for Our Times - A prologue by Marta Barone