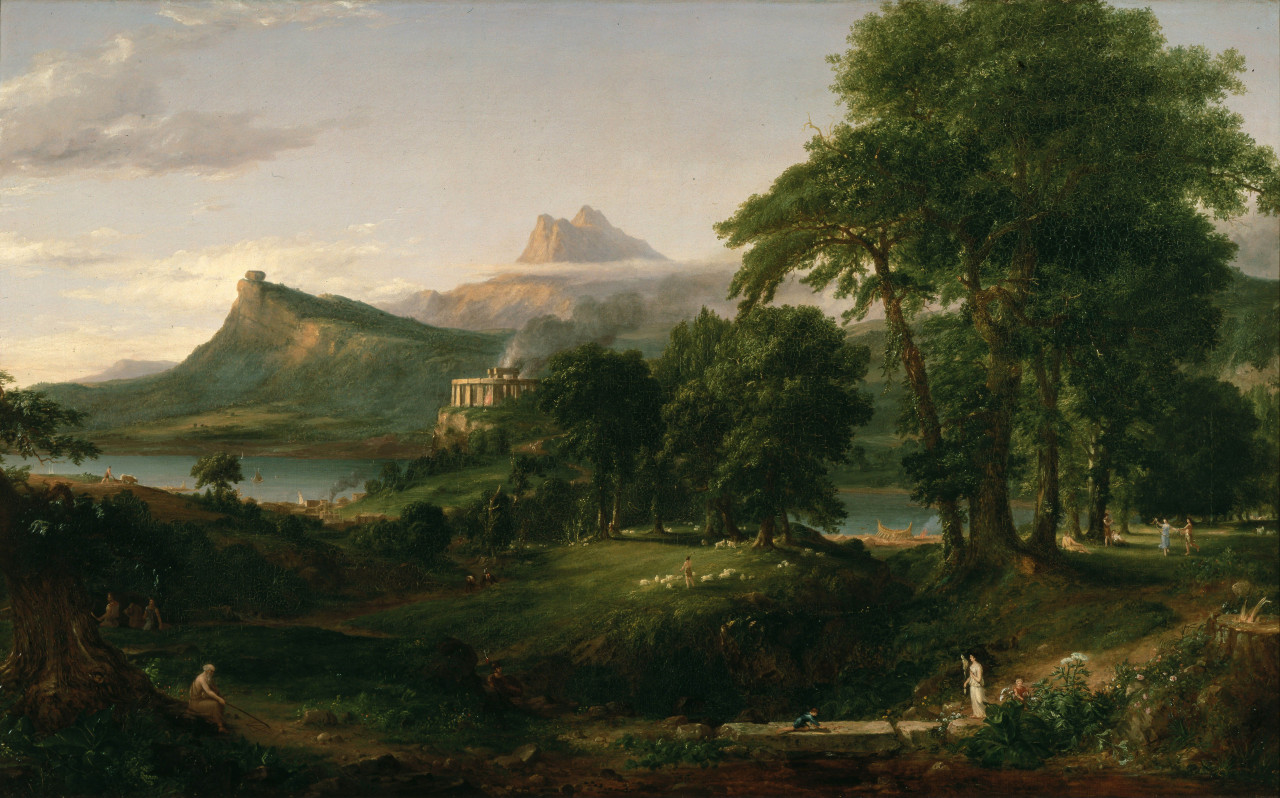 (The Course of Empire, painting by Thomas Cole)

Quid πλατανῶν opacissimus?
‍
Sleep wrapped you like a tree in green leaves,
you breathed like a tree in a quiet light.
In a diaphanous spring, I saw your form,
your eyelids closed and eyelashes carving the water.
In the supple grass, my fingers found your fingers,
there I held your pulse for a moment
and felt your heart’s pain elsewhere.
‍
Under the plane tree, among the water and laurels
Sleep moves and dissevers you
about me, near me, I am unable to hold you whole,
you are one with silence.
I watched your shadow lengthen and lessen,
lost among other shadows, in the other
world that forsook you and held you.
‍
The life which they gave us to live, we lived.
Pity those who wait with such patience
lost among the dark laurels, under the heavy plane trees:
they alone speak with cisterns and wells
and are drowned in the circles of a voice.
‍
Pity the companion who shared our loss and sweat
and dove into the sun like a crow beyond the ruins,
without hope of delight in our reward.
‍
Give us, outside of sleep, serenity
‍

Born in Smyrna in 1900, Giorgos Seferis would become one of the most prominent Greek poets in the twentieth century. Seferis worked in the greek diplomatic service for much of his life, witnessing the flux and fissure of the Greek State at close quarters. By the time he received the Nobel Prize in 1963, Seferis had lived through the fall of a monarchy, mass constitutional reforms, the first Balkan wars, the Greco-Turkish war, two world wars and a civil war.
‍
Pulblished in 1936, his collection Mythistorema comprises of 24 rhapsodies, mirroring the 24 book division of Homer’s Odyssey. In many ways, Mythistorema is an Odyssey Redux, a modern poetics of displacement. Written in the aftermath of the Turkish capture of Smyrna, Seferis’ homeland and an event that caused the mass exodus of 1.2 million Greeks and Turks, history haunts Mythistorema. The loss of an Ithaca and the dispersal of a people can be felt throughout the poem’s course. Describing the collection, Seferis wrote that he had tried ‘to express, with some coherence, circumstances that are as independent of myself as the characters in the novel’.

However, poem 15 of Mythistorema presents a strangely insular interlude in the collection. Here, the exile turns inward. Seferis' reader finds two people drifting from one another, dissevered as gently and definitively as shadows in the afternoon light. Although Seferis never specifies the poem’s address, its persistent ‘you’, the poem seems to conjure Seferis’ personal life, particularly his romance with Maria 'Maro’ Zannou. When they first met in the early 1930s, Maro was married; it would take a decade for their lives to reconcile, and, ultimately, Maro would become the poet's lifelong partner. Nonetheless, in the period before that- during the composition of Mythistorema- their relationship was characterised by fraught letters and distance.

In poem 15, we find ourselves in a vague Arcadia, where quietude becomes silence, patience the attrition of the soul. The word which closes poem 15, which also ends the collection, "Γαλήνη", "serenity", seems more a plea than the poem’s reality.

Ollie is a freelance writer currently living in Athens. Her writing has appeared in the Oxford Review of Books, Oxon Review, JAR and Ash. She studied Classics and English at the University of Oxford, where she first encountered Seferis. Since, she has spent much time with Seferis, Cavafy, Ristsos and Liddell & Scott. To her, translation is not simply an act of conversion, but a practice in seeing. It is in it's moments of "ἄῗδρις" (the ancient greek term for 'un-seeing' or 'unknowing') that translation most excites her.