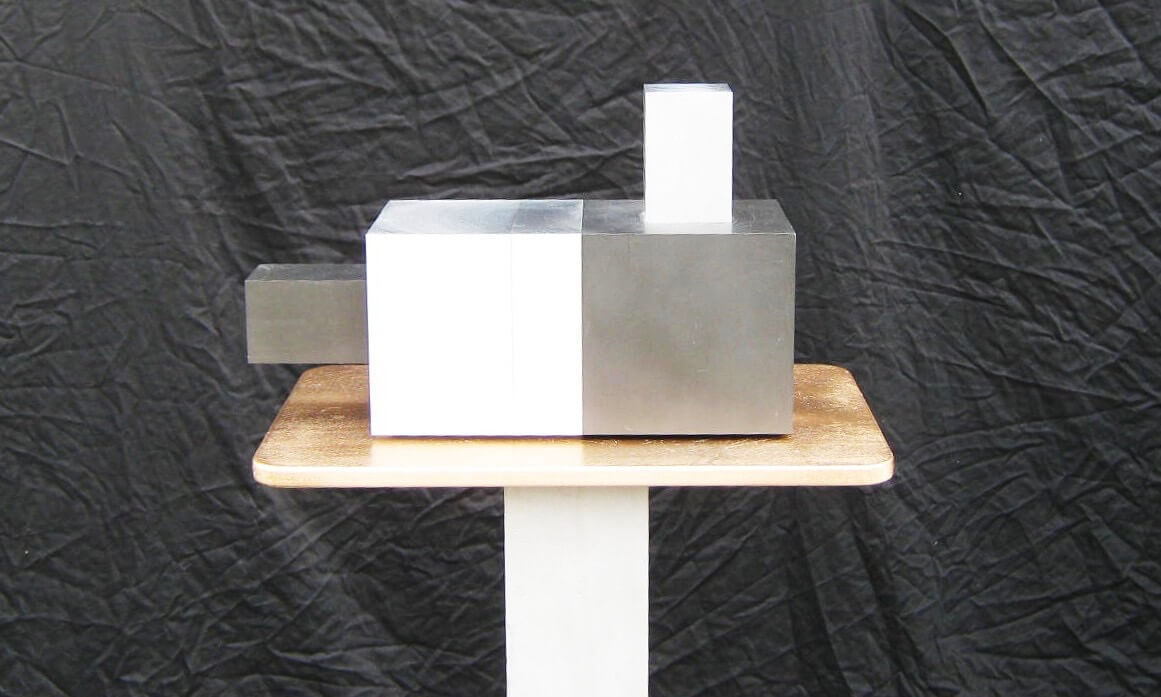 My original intent for creating this piece was to inspire the viewer to think.

I chose specific materials and geometry to urge beyond the casual glance. Solid billet aluminum and graphite are both metals, but in their natural state differ very much from each other. Their appearance is, fair to say, visually opposite, which provides a perfect contrast. Creating precise geometric blocks of them, exact replicas to within one thousandth of an inch, was quite challenging. Graphite is extremely messy to machine, since it deposits very fine black dust everywhere. Aluminum, on the other hand, is one of the easiest of the metals to machine, so putting them side by side was additionally appropriate. Another element of this work is that each block has a portion of the other rising from it. One rises vertically while the other extends horizontally. Why?

Faith is clearly represented here, as is reason, but which is which? Does it matter? Does one eschew the other or is each needed to understand the other? Does faith need to be unreasonable? Must the foundation of reason always be empirical? Surely, they can be understood independent of each other, but what happens when they are examined as a unit?

My personal impetus for creating this work was a casual conversation with a gentleman who has since died. We would often get into very enjoyable but heated arguments as to the nature of things from differing philosophical perspectives. I recall a specific instance when his reply to me was: “As I see it, there are two alternatives here. I could be right and you could be wrong, or vice versa. Would you agree?” I thought for a moment and responded that there was a third possibility. “What’s that?” he asked. I said: “We could both be wrong!”

Tony Murray is a self taught artist whoʼs work has been in over 75 Nationwide and Regional juried art shows and exhibits. His eclectic works involve various media such as drawing, scratchboard, painting, videography, sculpture and photography.