The Grasshopper and the Bell Cricket
|
Yasunari Kawabata 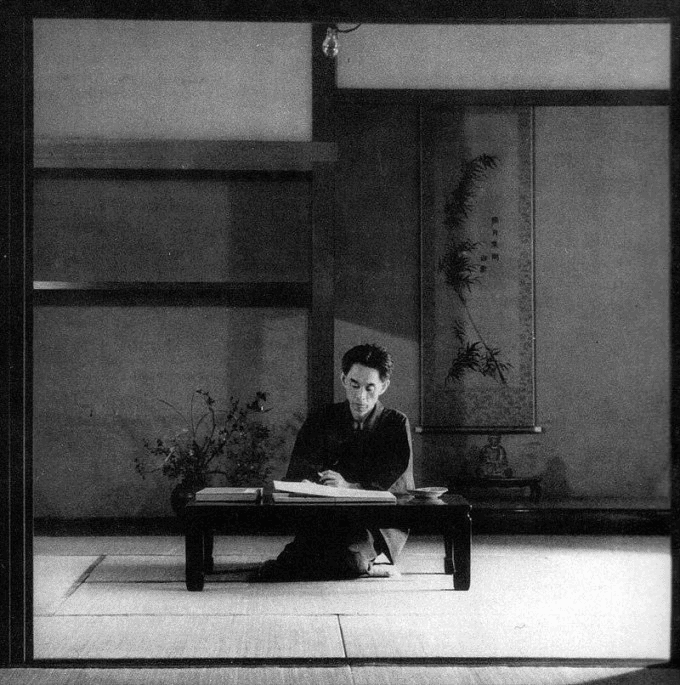 The Grasshopper and the Bell Cricket

This story was translated in 1988 by Lane Dunlop and J. Martin Holman. They reserve all rights.

Walking along the tile-roof wall of the university, I turned aside and approached the upper school. Behind the white board fence of the school playground, from a dusky clump of bushes under the black cherry trees, an insect’s voice could be heard. Walking more slowly and listening to that voice, and feeling reluctant to part with it, I turned right so as not to leave the playground behind. When I turned to the left, the fence gave way to an embankment planted with orange trees. At the corner, I exclaimed with surprise. My eyes gleaming at what they saw up ahead, I hurried forward with short steps.

At the base of the embankment was a bobbing cluster of beautiful varicoloured lanterns, such as one might see at  a festival in a remote country village. Without going any farther, I knew that it was a group of children on an insect chase among the bushes of the embankment. There were about twenty lanterns. Not only were there crimson, pink, indigo, green, purple, and yellow lanterns, but one lantern glowed with five colours at once. There were even some little red store-bought lanterns. But most of the lanterns were beautiful square ones that the children had made themselves with love and care. The bobbing lanterns, the coming together of children on this lonely slope - surely it was a scene from a fairy tale?

One of the neighbourhood children had heard an insect sing on this slope one night. Buying a red lantern, he had come back the next night to find the insect. The night after that, there was another child. This new child could not buy a lantern. Cutting out the back and front of a small carton and papering it, he placed a candle on the bottom and fastened a string to the top. The number of children grew to five, and then to seven. They learned how to colour the paper that they stretched over the windows of the cutout cartons, and to draw pictures on it. Then these wise child-artists,cutting out around, three-cornered, and lozenge leaf shapes in the cartons, colouring each little window a different colour, with circles and diamonds, red and green, made a single and whole decorative pattern. The child with the red lantern discarded it as a tasteless object that could be bought at a store. The child who had made his own lantern threw it away because the design was too simple. The pattern of light that one had had in hand the night before was unsatisfying the morning after. Each day, with cardboard, paper, brush, scissors, pen-knife, and glue, the children made new lanterns out of their hearts and minds. Look at my lantern! Be the most unusually beautiful! And each night, they had gone out of their insect hunts. These were the twenty children and their beautiful lanterns that I now saw before me.

Wide-eyed, I loitered near them. Not only did the square lanterns have old-fashioned patterns and flower shapes, but the names of the children who had made them were cut in the squared letters of the syllabary. Different from the painted-over red lanterns, others (made of thick cutout cardboard) had their designs drawn onto the paper windows, so that the candle’s light seemed to emanate from the form and colour of the design itself. The lanterns brought out the shadows of the bushes like dark light. The children crouched eagerly on the slope wherever they heard an insect’s voice.

“Does anyone want a grasshopper?” A boy, who had been peering into a bush about thirty feet away from the other children, suddenly straightened up and shouted.

“Yes! Give it to me!” Six or seven children came running up. Crowding behind the boy who had found the grasshopper, they peered into the bush. Brushing away their outstretched hands and spreading out his arms, the boy stood as if guarding the bush where the insect was. Waving the lantern in his right hand, he called again to the other children.

“I do! I do!” Four or five more children came running up. It seemed you could not catch a more precious insect than a grasshopper. The boy called out a third time.

“Doesn’t anyone want a grasshopper?”

It was a girl, who just now had come up behind the boy who’d discovered the insect. Lightly turning his body, the boy gracefully bent forward. Shifting the lantern to his left hand, he reached his right hand into the bush.

The boy quickly stood up. As if to say “Here!” he thrust out his fist that held the insect at the girl. She, slipping her left wrist under the string of her lantern, enclosed the boy’s fist with both hands. The boy quietly opened his fist. The insect was transferred to between the girl’s thumb and index finger.

“Oh! It’s not a grasshopper. It’s a bell cricket.” The girl’s eyes shone as she looked at the small brown insect.

Glancing with her bright intelligent eyes at the boy who had given her the cricket, the girl opened the little insect cage hanging at her side and released the cricket in it.

“Oh, it’s a bell cricket,” the boy who’d captured it muttered. Holding up the insect cage close to his eyes, he looked inside it. By the light of his beautiful many-coloured lantern, also held up at eye level, he glanced at the girl’s face.

Oh, I thought. I felt slightly jealous of the boy, and sheepish. How silly of me not to have understood his actions until now! Then I caught my breath in surprise. Look! It was something on the girl’s breast that neither the boy who had given her the cricket, nor she who had accepted it, nor the children who were looking at them noticed.

In the faint greenish light that fell on the girl’s breast, wasn’t the name “Fujio” clearly discernible? The boy’s lantern, which he held up alongside the girl’s insect cage, inscribed his name, cut out in the green papered aperture, onto her white cotton kimono. The girl’s lantern, which dangled loosely from her wrist, did not project its pattern so clearly, but still one could make out, in a trembling patch of red on the boy’s waist, the name “Kiyoko.” This chance interplay of red and green - if it was chance or play - neither Fujio nor Kiyoko knew about.

Even if you have the wit to look by yourself in a bush away from the other children, there are not many bell crickets in the world. Probably you will find a girl like a grasshopper whom you think is a bell cricket.

And finally, to your clouded, wounded heart, even a true bell cricket will seem like a grasshopper. Should that day come, when it seems to you that the world is only full of grasshoppers, I will think it a pity that you have no way to remember tonight’s play of light, when your name was written in green by your beautiful lantern on a girl’s breast.