A quinate of questions for Titos Patrikios
|
Vasiliki Poula 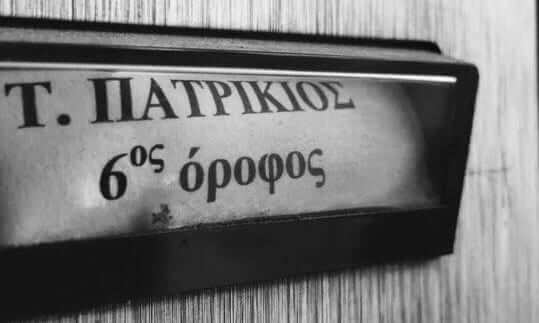 Titos Patríkios is a renowned Greek poet and the recipient of the 1964 national poetry prize for his oeuvre.

Should the role of a poet – if there is such a thing as a ‘role’ – change amidst times of financial or political crisis?

The role of the poet is one and never changes – to write well. Anything else is secondary and as such, often misleading. Ambitious ideas of social change and revolution are nice, sometimes even desirable, yet might intrude. When a piece adopts political stances and manifests ideals, then it is becoming committed to something other than its primary duty. Those ideas are alien to the piece, they are extrinsic, there is cacophony. Instead, they are desirable once they stem from within, when they are intertwined with the words and are not artificially tied with them.

The poet’s duty is one and only and the quality of its performance is to be decided solely by time, that unerring judge, and by no other external standard. And trust me, the pieces that are not convicted to eternal oblivion verify my stance on pieces that try to be political for the sake of being political. Similarly, one should not merely proclaim hope, it is like the cod-liver oil that our parents used to feed us back in the occupation of Athens during the Second World War. Force-feeding of hope, even in desperate times, cannot replicate authentic hope, in the same way that the cod-liver oil might have filled our stomachs, yet we knew it was a compromise imposed by necessity of circumstances.

What about great historical moments? Do they invite poets to take a stance on events, to protect universal ideals of peace, humanism and solidarity?

To each their own. One might retreat, another might be very involved and very active. Again, there is no clear duty on those things, for active involvement is not equivalent of good quality and vice versa. For instance, Cavafy can be considered as a poet, who was not actively engaged in the political events of Greece upon times of great instability, himself being in Egypt. Yet, his poems have expressed an entire generation and continued to express the generations that followed.

Should poetry be ‘imposed’ on the lives of students through education?

Some decades ago, the trend was to have kids learn poems by heart. This practice was vehemently criticized as a mechanical repetition, depriving children of their critical faculties. Today, people start to re-consider. The familiarization with a poem is not a technical process – it signals the scrutiny of linguistic wealth, which at some point in your life, you might recall and even use.

It is a matter of perspective, you see, imposition is bad, yet knowledge is powerful. On the one hand, to get to know the literature of your country, of the entire world – I find this very positive. On the other hand, it is problematic if the child is obliged to value or appreciate some forms of literature, without really engaging with the content. Nevertheless, taking a step back, I think that literature has a very fundamental benefit, especially in early ages – you can explore your mother tongue and you can expand the breadth of your language, your ability to express yourself, to interpret the world around you, to shape your thoughts. Without words, you cannot do all these things. Without words, we regress to a primitive state of mind and lifestyle, despite all the technological and scientific advancements that surround us.

Today, increasingly more people seem to write verse – or maybe it has always been like that, but at least now there is more exposure. What do you think of this?

This is great, since many people find solace in writing. Yet, the fact that someone writes poetry does not necessarily mean that they are poets themselves, with whatever force this word might carry. In the same way that one who once makes a reparation in his house, does not instantly qualify as a builder. The process of finding the apt word, or the apt brick, takes time, an entire lifetime. The only difference between the writer and the builder could be that the latter would never reasonably destroy his wall, while the writer intentionally does so, he abolishes his own constructs out of fear of self-entrapment in order to create new, different things.

Does poetry find you or do you find poetry?

Oh, I cannot answer to that – sometimes, I feel I am being chased and discovered by poetry and on other occasion, I feel like I am the one begging poetry to come out.

Let me read you some lines, which might better communicate what I am trying to say:

Upon the threat of abandonment’

[The interview was first published in Greek in the journal Ekkremes.]