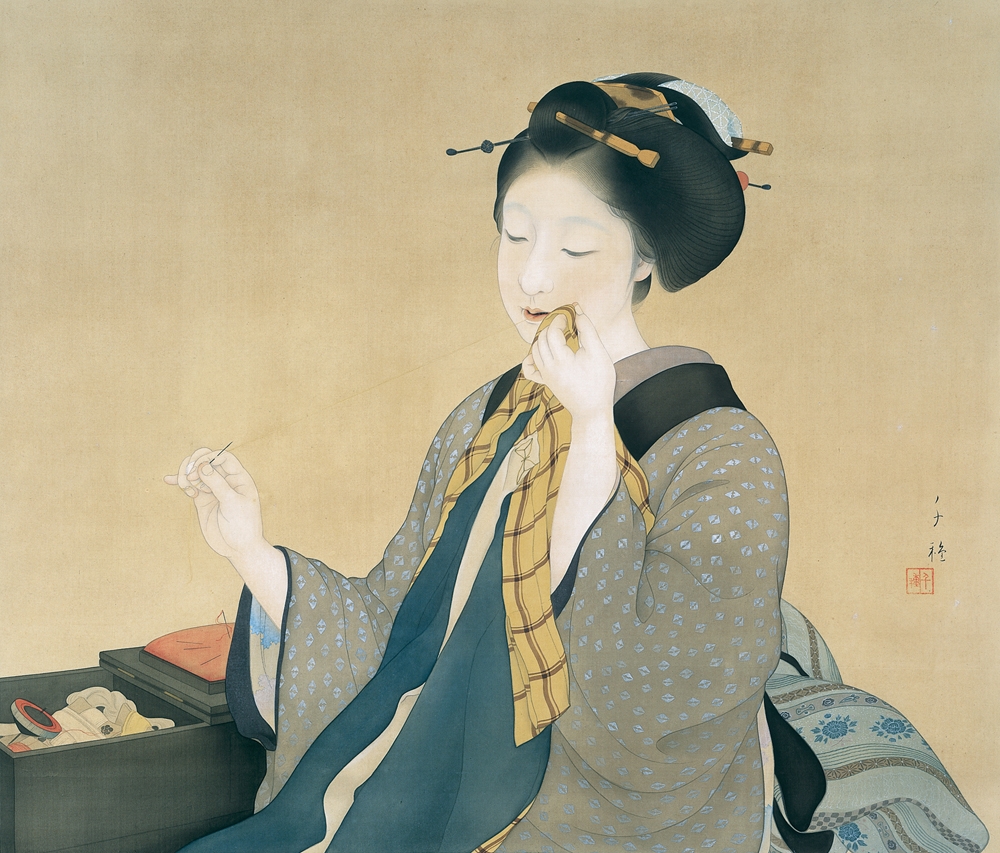 She finds an old black and white photo of her mother as a teenager standing outside of her wooden house in the Hokkaido snow, wearing a white kimono scattered with flowers, tabi and zori, her chin-length hair in a slightly waved bob. What she notices most of all is her smile: it is wide and full, and with the exception of the photo of mother and infant daughter in the photographer’s studio, free of the cares that have marked the one she has always known.

The daughter on her wedding day. In front of a mirror, she wears a cream silk dress layered beneath with tulle, wondering who it is looking back at her: this is not the place or the person she wants to be. She touches the organza of her bodice and feels constricted; it is not the same as the binding of love. When young, she played with her neighbour’s dolls, their plastic limbs resistant to being dressed, and once finished lay there, waiting for their joints to be directed in unnatural movement. Discussing the poet Rilke’s essay on dolls in The Dream of the Moving Statue, Kenneth Gross notes that, ‘Rilke imagines us angry and horrified when we discover … that stupidity of dolls that lets them be just what we liked,’ their passivity and inability to interact only lost through longevity, transcending their dollness. Stiffly jointed with the fear of indecision, the daughter becomes the very doll she struggled with so long ago. Suddenly she recalls her mother’s words, swimming through the ripples of silk in her memory. Hands by her sides lift halfway and drop. I thought I was a bird.

Galen Strawson, in Things That Bother Me, writes that, ‘grief felt for the person who has died seems like a natural expression of love, a natural expression whose absence would show failure of love.’ But what of grief without the extremity of death? In her mother’s snowy smile and her own wedding day reflection, the daughter feels a profound grief. She knows the latter is a failure of love; self-love, later expanding to marriage-love. With her mother, she knows it is more of an erosion: there has been nothing but love when she has known her mother, yet since that Hokkaido photo, her mother has known the disintegration of a particular innocence of love that is part of the reality of its maintenance.

With the tenderness of morbidity—unpleasant subjects such as death or illness being hand-in-hand with intimacy—she sometimes wonders about the clothing of final rest. She goes through Funeral in the card catalogue of her memory and pulls up her relatives’ unremarkable costumes. Only her father wore something of note, favourite tweeds that the family associated him with. Though her mother is still alive and with good fortune will continue to be, the daughter cannot help but mentally dress her for this moment. Again, Duras says, ‘death, the fact of death coming towards you, is also a memory. Like the present. It’s completely here, like the memory of what has already happened and the thought of what is still to come.’ This dressing of a memory that has not yet occurred feels as important as imagining a doll in frozen splendour, like the kimono-clad kokeshi that lined surfaces of the house when she was young, or hinamatsuri dolls sitting in brocaded state on their tiers; passed down, and so gaining the solemnity of years, the dolls transcend the meaning of play. It is the formality of respect and the celebratory preparation of a future remembrance, the ritual of memory. She thinks again of that cream-coloured, crane and flower-adorned kimono, folded carefully in tissue and mothballs somewhere within a satin-sheen wooden chest of drawers in her childhood home. The daughter knows that her mother has had to undergo her own transformations from her childhood world to the one after her marriage. She has watched her mother shed her silken wings over time, which the child then wore and shed and then longed for again. As the years passed, she recognised the pattern of the bird-women of her life, and she now looks to her memories in the way others await the migration of the swallows.

More and more, she remembers. And when she conjures the images of wearing these garments, a strange sartorial—or perhaps it is bodily—regret appears alongside them. She reflects on a specific moment of being dressed: the feeling of the sash being bound almost across her flat child’s chest. This is most likely a remnant of the infant’s unformed, unarticulated comfort at being bound tightly and safely, a memory of the womb already starting to fall away. She thinks of the breasts that formed later on and her delight at their shape, which was also a delight at becoming a woman, and so belonging to something. As they grew larger, something her mother never had except briefly in pregnancy, she felt the distance again. The loneliness of separation from the physical attributes of an identity. She has the vagaries of an undefinable face, but her figure is Western, and she knows these curved lines would now mar the perfect geometry of what was her body in a kimono. She longs for a precise physiological equation, as if it would answer the question of herself.

She thinks again of erosion; the slow, almost unnoticeable wearing love and life can often find itself going through, a change from motion to rigidity, birds to dolls. It is not that to be the latter necessarily represents a lack of love, though it sometimes does. It is a solidity and certainty that is less evocative of nests and first flights than realising the destiny of one’s eternal permanence, the transformation back to the image and dreams of the garment-house. Silk and cotton turn to wood: the grandmother, the mother, and finally the daughter in a still, smiling row, enfolded in the pinioned wings of time. The kimonos that were filled once with flesh and laughter and wisdom are now empty, in their dreaming folds they wait for new birds.

As Barthes writes in Mourning Diary, ‘we don’t forget, but something vacant settles in us.’

The Unusual Heartbreak of Endings